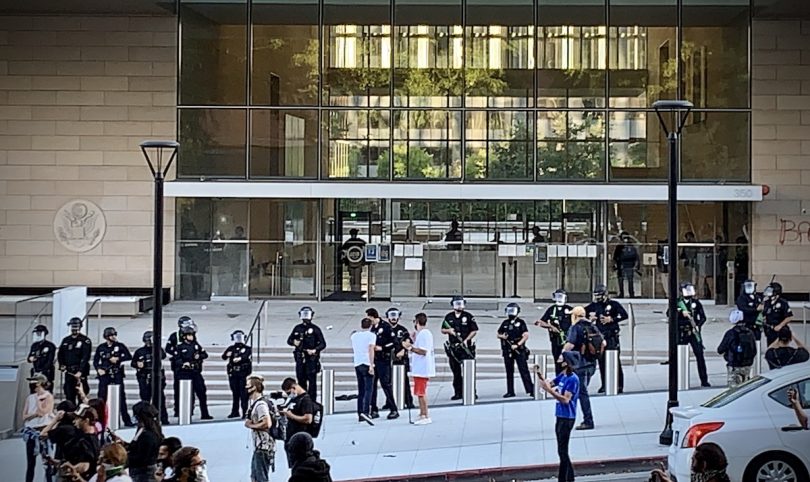 As legislators across the United States propose policing changes, one issue has been a sticking point: bans on police using tear gas against protesters.

Dozens of law enforcement agencies have used forms of tear gas on protesters marching against police brutality since the killing of George Floyd, a Black man, under the knee of a Minneapolis police officer.

Over that time, many police chiefs and law enforcement leaders have supported legislation to improve their work. But bans on tear gas to quell crowds of protesters? From a police perspective, that’s not going to fly.

While lawmakers in at least nine states have introduced bills that would ban or limit the use of tear gas by police, many of the measures have been rejected or softened, including:

In Oregon, tear gas ban legislation passed — after it was amended to give an exception for riots.

In Michigan, the chair of the state House Judiciary Committee doesn’t want to take up a bill to ban chemical agents because he said it would hamstring police.

In California, the sponsor of a tear gas ban said she purposely avoided getting input from police expecting they would not be in favor.

Police say outright bans are a step too far and cut out an important, less lethal way of controlling violent crowds.

“What if we didn’t have gas? What would our alternative be?” said Jim Ferraris, president of the Oregon Association Chiefs of Police and former police chief in the state’s two biggest cities: Portland and Salem. “Our alternative is physical force.”

But advocates of prohibiting tear gas refute that notion, especially as protests continue around the country.

“If you’re using tear gas on people sitting peacefully, if you’re firing rubber bullets into a crowd that is yelling angrily … it creates violence when none exists,” said Rachel Moran, an associate professor at the University of St. Thomas School of Law in Minneapolis who studies police accountability.

“It’s law enforcement creating the danger, initiating the violence,” she said. “That’s really troubling to me.”

The Centers for Disease Control and Prevention defines riot control agents, commonly referred to as tear gas, as chemical compounds that cause temporarily debilitating irritation to the eyes, mouth, throat, lungs and skin.

The most common kinds are chloroacetophenone and chlorobenzylidenemalononitrile, typically sprayed as a liquid from pressurized canisters or tossed into a crowd as grenades. The CDC also lists pepper spray as a riot control agent.

Oleoresin capsicum, an extract derived from cayenne pepper plants, known as pepper spray, also can be dispensed from canisters or used to fill paintball-like projectiles.

At least 100 law enforcement agencies fired some form of tear gas on people in the weeks after Floyd’s death, according to a tally by The New York Times. Governors in 28 states and the District of Columbia called in the National Guard, and city leaders imposed curfews as protests in some places led to looting and violence. But many protesters were peaceful.

There have been some semantic debates over which chemicals police have used.

The most prominent example is the question of what chemicals law enforcement and the National Guard employed to disperse protesters outside the White House in early June to allow President Donald Trump to walk to a church for a photo op.

Multiple agencies were present. Among them, U.S. Park Police have denied using tear gas and say they used smoke canisters and pepper balls. The U.S. Secret Service said at least one person used pepper spray. But a major in the D.C. National Guard testified to a congressional committee this week that tear gas was used.

The use of force is under investigation by the Department of Justice Office of the Inspector General.

“Every American has the right to peaceful protest,” said Diane Bernabei, a thematic specialist on arms transfers for Amnesty International, an organization that advocates for human rights and international law. Bernabei shared her opinions as her own and not on behalf of Amnesty. “The various instances of the use of force against civilians exercising this democratic right is appalling and should be unlawful.”

“What we’ve seen in the past is there can be a place for these, but it’s often as the very, very last resort. Not the first resort,” said Dic Donohue, an associate policy researcher at the RAND Corporation, a global policy think tank, and a retired sergeant in the Massachusetts Bay Transportation Authority.

“The best or better ways to do it are through peaceful means or through communication,” he said, “stepping up and arresting the instigators in the crowd, the bad actors in the crowd.”

And Yuri Linetsky, an associate professor at the University of Alabama’s law school and a part-time detective sergeant in Ohio, said law enforcement has a responsibility to protect people and property, making the use of force sometimes justifiable.

“The pepper ball guns and the tear gas canisters may be the best choice from your arsenal when downtown is getting destroyed,” he said.

But others are hard-pressed to find a place for tear gas. Sometimes, Moran said, a crowd’s actions are uncomfortable but not criminal.

“I don’t think the police should be doing much of anything,” Moran said. “They should be present as a potential source of crowd control.”

‘The Law Has Caught Up’

In Oregon, police are no longer allowed to use tear gas to control crowds, under a new law signed June 30 by Democratic Gov. Kate Brown.

But the law has a notable exception: The chemical agent can be used if police declare a riot (a term used in the state’s criminal statutes to describe a group of at least five people acting violently) and after at least two verbal warnings and a chance for the crowd to disperse.

The law now matches the standards of major police agencies including Portland and Salem, said Ferraris, president of the state’s police chief association. “The law has caught up with practice.”

State Rep. Janelle Bynum, a Democrat, supported the House bill as co-chair of the newly formed Joint Committee on Transparent Policing and Use of Force Reform. But in an email, she said she is not satisfied with the law.

When the bill was introduced, there wasn’t time to get robust feedback from the public or police. “I choose to use a gradual approach,” she said of changing the measure from banning tear gas to regulating it.

Fellow committee member Republican state Sen. Kim Thatcher voted in support, but not without criticizing the bill’s quick movement. The governor signed the bill five days after its introduction.

“I don’t think it’s going to end up doing the thing that people were hoping it would do,” Thatcher said. “It was kind of haphazard legislating.”

But Ferraris, president of the state’s police chief association, is relieved. The original prohibition would have been disastrous for law enforcement, he said.

“Tear gas is such an effective tool for us to use,” he said, “not only within crowd control but in other circumstances.”

Colorado’s legislature also passed a law that limits tear gas use as part of a larger package of changes to policing. Before using tear gas, police must give an order, then allow time and space for people to move.

In other states, proposals to ban chemical agents including tear gas either haven’t gained traction or face strong resistance.

A package of police-related legislation recently passed by the Massachusetts House allows tear gas use only after de-escalation tactics have been attempted. A lawmaker tried to amend the bill to ban tear gas but didn’t get enough votes.

In Michigan, Democratic state Rep. Kara Hope introduced a bill to ban chemical irritants for crowd control at the end of June despite thinking it was unlikely to go anywhere, she said, in the Republican-controlled legislature.

“We left it pretty broad. We are hoping if the bill was ever heard — we don’t expect that it will be — that we could work on some of those details,” Hope said. “We intentionally left it broad so that we could at least have the discussion.”

The bill was referred to the Judiciary Committee. Its chair, Republican state Rep. Graham Filler, said he doesn’t support it.

“Tear gas is one of the best ways to use nonlethal force to disperse a crowd,” said Filler, who worked as a state assistant attorney general for several years. “If we continue to hamstring police, I just really worry that we go too far.”

In California, a state assemblywoman troubled by stories of people hurt while protesting sought out standards for using chemical irritants and rubber bullets on crowds. She discovered there were none statewide.

“We wanted to make sure that people’s First Amendment right to assemble wasn’t exploited or affected by the police uses of these kinetic energy objects or pepper spray or tear gas in a way that was aimed more at crowd control,” said state Assemblywoman Lorena Gonzalez, a Democrat.

So she introduced a bill that would restrict the use of rubber bullets and pepper spray and ban tear gas. The proposed ban has resulted in a lot of pushback, she said.

Still, she thinks it’s a vital part of her legislation. “Tear gas is a product of war, a chemical warfare agent banned in war. Perhaps we don’t need to continue to use it.”

But Chief Rob Handy, first vice president of the California Police Chiefs Association, said the group can’t support an outright ban. “We think the way it’s currently written is too restrictive. It takes away a valuable tool from us to help protect our community and our officers.”

The association, however, supports statewide regulations.

“The tear gas we are talking about has no place against a purely peaceful protest,” Handy said. “There’s a very limited, narrow use, and that’s where you can get into the details of crafting [legislation].”

Gonzalez said she’s talked with academics, medical experts and some police officers, but has purposely stayed away from working too closely with police.

“Normally I do think it’s important to talk to the officers who utilize these weapons,” she said. “But we are very aware of the past ability of these stakeholders to provide too much influence.”