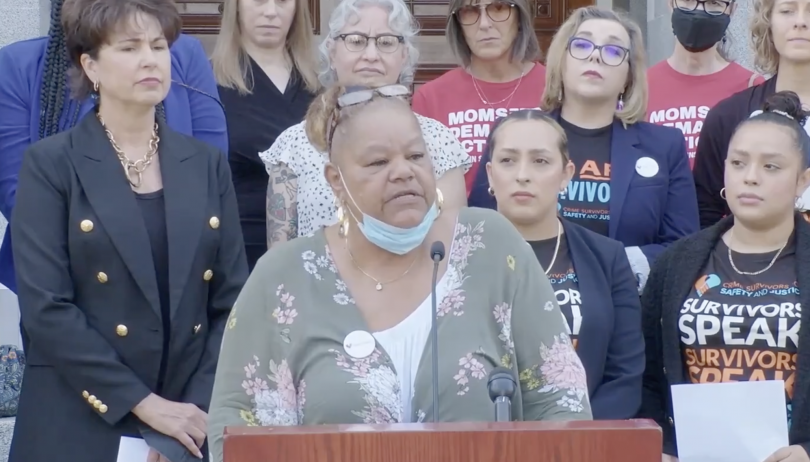 Victims and advocates are urging California legislators to pass a bill meant to ensure that the families of people killed by law enforcement, as well as individuals whom police seriously injure, are eligible for state-level aid for victims.

The bill, SB 299, would prohibit the California Victim Compensation Board (CalVCB) from denying an applicant’s claim because the victim “failed to cooperate” with police.

CalVCB would also be prohibited from denying a claim because the applicant was involved in a crime when they came into contact with law enforcement. The bill carves out some exceptions, however. CalVCB would be able to deny an applicant who was convicted of a violent crime or crime that caused the serious injury or death of another person at the same place and time as the violent police encounter.

The bill would also make a change to broaden eligibility for people who don’t report their victimization to the police.

According to data the U.S. Department of Justice collected in 2019, 60 percent of people violently victimized never report their experiences to the police.

Under current law, CalVCB is barred from approving claims based on incidents for which no police reports were filed, except in cases involving sexual assault, domestic violence, and human trafficking. SB 299 would eliminate that barrier, allowing CalVCB to consider other evidence that a “qualifying incident” occurred from otherwise eligible victims seeking compensation.

“SB 299 is critically important, as it ensures that more survivors receive the support needed to address their trauma, regardless of who caused that harm,” said Senator Connie Leyva (D-Chino), the bill’s author. “Survivors of police violence and other violent crimes should not have to overcome unjust barriers to compensation.”

“This bill would unjustly expand the universe of claimants entitled to receive payments as victims of crime from the California Restitution Fund,” according to a statement from the association. “The bill ignores the reality that use of force by peace officers is most often lawful and justified – and certainly not criminal.”

It passed out of the Senate, and was heard by the Assembly, but was ultimately put on hold until the following year.

In the second half of August, after all legislative committees are shut down, there are two weeks for the Senate and Assembly to hold final floor sessions. All approved bills must arrive on the governor’s desk by the end of August 31. The governor then has until the end of September to sign or deny the bills before him.

“The finish line is within sight, but it’s going to take all of us to get there,” Leyva said during a press conference to lobby for the bill’s passage. Leyva was flanked by the loved ones of people killed by law enforcement, including Stephanie Hatten, whose son was fatally shot by police.

Grief compounded by stigmatization and barriers to state support

“My son, Antwaune Pierre Burisse Sr., was gunned down by our Stockton Police Department on July 15, 2020,” said Hatten.

“His children witnessed it,” she said. “To make matters worse, his nine-year-old son — if you want to know the impact — had an AK put to his head” while police searched him.

Burisse’s sixteen-year-old daughter, said Hatten “who is a scholar, who was accepted into most of our ivy league colleges, was put into handcuffs while they both watched their father go on a stretcher with his head hanging out full of bullet holes.”

Antoine’s wife, Hatten said, lost her job and was given just seven days to move after her husband’s death. “Antoine had barely made it to the morgue,” she said. “We pooled everything we had to keep our family together.”

Antoine’s death has had a crippling impact on his seven children, according to the children’s grandmother. “This is their first introduction to devastation,” she said. The nine-year-old has told Hatten that he hates the police, and her granddaughter, once bound for an ivy league college, is now suicidal. “I’ve turned into her psychologist, I’ve turned into her therapist, just to keep her alive,” she said.

Hatten said she had to resign from her job to take care of grandchildren left without services to help them.

After Stephanie Hatten shared her family’s story, Ashley and Michelle Monterrosa told of the impact of the death of their brother, Sean Monterrosa, killed by Vallejo Police on June 2, 2020. “He was a reader, an artist, an athlete, who cared deeply for others and worked with Black and brown youth in our San Francisco community,” said Michelle Monterrosa. “Sean’s last text to us was a petition to get justice for George Floyd.”

Sean, she said, was “kneeling with his hands in the air when Vallejo Police Officer Jarrett Tonn fired five shots from the back seat of an unmarked police vehicle and killed him.”

Michelle Monterrosa wanted to emphasize, she said, that “losing someone you love to violence is an unimaginable pain that ripples through every part of your life.” And when the loss “comes from someone tasked with keeping your community safe … it’s also stigmatizing and destabilizing,” she said. “instead now, in Sean’s place, there’s an aching void of grief.

“Because Sean’s killer had a badge,” her family doesn’t qualify for victim compensation.

“There was no support from Solano County or the state to provide our family with access to funeral arrangements, therapy, or support to pay medical bills that fell onto our family,” said Ashley Monterrosa. “If SB 299 had already been a law, our parents would have been able to take time off of work to mourn and plan for his funeral. We, his sisters, could have accessed counseling to help us process our grief of losing our only brother, and we would have been acknowledged as victims, and received the support and compassion … that we deserve.”

A difficult path to compensation

In April 2022, the Prosecutors Alliance of California surveyed 711 victims who told of the ways in which the state was failing them.

A majority of respondents said they were victims of more than one violent crime, and 39 percent said they were not offered compensation following their victimization.

Over 40 percent said they needed financial help immediately after the crime to pay for rent, food, and other necessities.

Thirty percent of the victims said they were blocked from accessing compensation because they were on probation or parole, or because their violent incident involved police.

Another survey, conducted by Californians for Safety and Justice in 2013, found that nearly one out of every three victims of crime were unaware that they were eligible for compensation, but would have been interested in the program had they known.

Young people of color were the least likely to know about financial assistance offered through the compensation fund, according to the survey. And nearly half of survey participants said that applying for financial help was difficult.

CalVCB money comes from federal funds, restitution, and criminal justice system fines, and covers expenses that arise because of a crime.

“Victim compensation is an important pathway for survivors to access support – covering specific expenses such as medical bills, funeral and burial expenses, and counseling,” Californians for Safety and Justice, which sponsored the bill, noted. “Compensation is available only when a survivor has no other avenue for covering these costs (e.g. insurance or Medi-Cal). There are also limits on how much can be paid for each expense, and expenses must result directly from the crime.”

At the press conference to push for SB 299’s passage, Tinisch Hollins, Californians for Safety and Justice’s executive director, stressed that the bill would not “absolve individuals of accountability or create a financial benefit or incentive for people to commit crimes.”

It is, Hollins said, “in the best interest of public safety and dignity to make sure that every person who is harmed, whether directly or indirectly, when a crime takes place or an incident of violence takes place, gets access to the resources to heal, recover and stabilize their lives. This is also true when someone is harmed or killed during interactions with law enforcement.”

Image: Stephanie Hatten speaks at a press conference on August 2, 2022, courtesy of Californians for Safety and Justice.