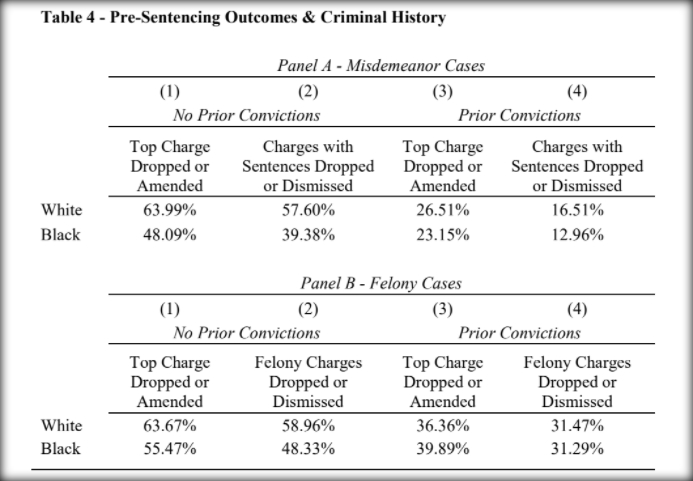 White defendants generally get better plea deals than their black counterparts, and are more likely to avoid incarceration for low-level offenses, according to new research by Carlos Berdejó of Loyola Law School, who analyzed more than 48,000 cases occurring over a period of seven years.

Most research into racial disparities in the criminal justice system has focused on arrests, initial charges, and sentencing, Berdejó points out in his report. These studies often reveal that African Americans are more likely to be searched by police during traffic stops, be arrested, have force used against them, and charged with more serious crimes than white people. Far fewer studies have looked at disparities in the stages between charging a defendant, and a judge’s final sentencing.

Controlling for other factors, outcomes are particularly affected by defendants’ criminal histories, Berdejó found. White people with no prior criminal history are more likely than black defendants with no criminal history to have their charges reduced, according to the study. The gap disappears for the most part when black and white defendants have prior convictions–both groups get similar treatment from prosecutors.

“These patterns in racial disparities suggest that prosecutors may be using race as a proxy for a defendant’s latent criminality and likelihood to recidivate,” Berdejó writes.

Although the study’s author is based in Los Angeles, at Loyola Law School, he chose to look at data in Wisconsin.

The state has one of the highest incarceration rates for black males, according to Berdejó. Data from 2010 shows that African Americans, who represented 7 percent of the state’s population, made up 43 percent of the prison population. Most of the disparity can be traced back to Milwaukee, where 50 of black males between the ages of 30 and 50 have spent time in state prison.

Berdejó says he chose Wisconsin, specifically, because the state’s courts’ data is “comprehensive,” he wrote. There’s a specific set of information regarding each crime, which allowed Berdejó to follow the trajectory of a case from initial charges to sentencing.

Local district attorneys’ offices make decisions regarding charges and plea bargains, and in Wisconsin and elsewhere, prosecutors have broad discretion in filing charges and in the plea bargaining process. It’s rare for a judge to reject a plea agreement, Berdejó writes.

The study looks at Wisconsin court data involving felonies and misdemeanors committed on or after January 1, 2000, that were adjudicated before December 31, 2006.

Berdejó says he narrowed down the data to look at Dane County, which includes the state capital, Madison, and is the second most populous after Milwaukee. The final dataset contains 48,368 cases from Dane County. Of those, 17,561 included a felony crime as part of the initial charges. The other 30,807 involved misdemeanors and lesser charges.

The Loyola researcher grouped the cases by charge severity, and controlled for certain characteristics of the crimes and defendants, as well as the identity of the prosecutors, quality of the defense attorney, and other factors.

“Efforts to mitigate racial disparities in sentencing and incarceration rates should take into account disparities in the plea-bargaining process and initial charging decisions,” Berdejó writes. “Proposals aimed at restricting prosecutorial discretion by increasing judicial discretion, for example via the elimination statutory minimum sentences, would seem to remedy these disparities.” Berdejó says his research also supports criminal justice experts’ calls for increased scrutiny of the misdemeanor process.