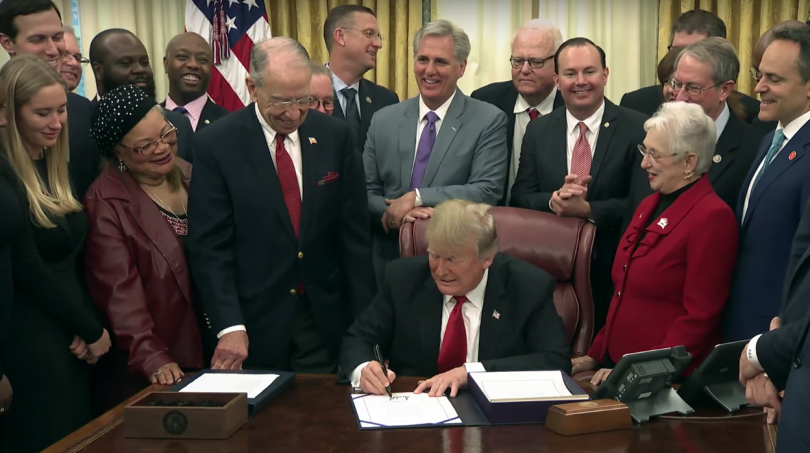 On Friday, December 21, President Donald Trump signed the First Step Act, a rare and important bipartisan criminal justice reform bill that will make small reductions to some prison sentences—mostly for drug offenders—while boosting inmates’ ability to earn their release faster through good time credits. The bill will affect less than 3 percent of the federal prison population, which hovers around 181,000, a far cry from the number of people held in state prisons.

While the modest, “baby step” of a bill has faced criticism for not going far enough to address injustices in the federal criminal justice system (or, for going too far), it has garnered the praise of many advocates and civil rights organizations, including the ACLU.

“We applaud the bipartisan group of lawmakers for listening to advocates,” the ACLU said on Twitter, in response to the passage of the First Step Act. “This law will give thousands of currently incarcerated people a second chance and help undo some of the many harms caused by our broken criminal justice system.”

Those who have experienced incarceration first hand also stepped up to support the bill this year. In June, a group of approximately 40 former inmates sent a letter to Congressional leaders, arguing that the First Step Act, while far from perfect, will still have a meaningful impact on the lives of federal prisoners and their families.

While it will take some months for the details of the First Step Act’s risk assessment tool to be worked out (we’ll have more on that later), there are a bunch of particularly noteworthy California criminal justice bills that will go into effect on January 1, 2019.

One of the most contentious new criminal justice laws taking effect on the first of the year, a bill to open up police personnel records in the name of transparency and accountability, is facing serious pushback from members of the law enforcement community.

The new law, SB 1421, will require police agencies in California to release records related to incidents in which officers use force—specifically, when they discharge their firearms or Tasers, use a weapon to strike a person’s head or neck, or use force that results in serious bodily harm or death.

The bill will also make records of on-duty sexual assault, including when cops exchange sex for leniency, available to the public.

Finally, SB 1421 will give the public access to records when officers are found to have been dishonest in the “reporting, investigation, or prosecution of a crime.”

The records will be redacted to remove some personal information, like the officer’s home address and family members’ names, as well as certain information about complainants and witnesses. Certain information will also be removed if “disclosure would cause an unwarranted invasion of personal privacy that clearly outweighs the strong public interest in records about misconduct by peace officers and custodial officers,” or if there was a specific reason that disclosing the information would pose a serious physical danger to the officer or others.

Earlier this month, in anticipation of the new law going into effect, the Inglewood City Council voted to destroy more than 100 Inglewood PD shooting records and other internal investigation documents.

A San Bernardino County Sheriff’s Department union also fighting against the new law has petitioned the California Supreme Court to determine whether SB 1421 is retroactive. And until the high court issues a decision on the matter, the SBSD wants the justices to block San Bernardino from complying with the law.

Under California’s felony murder rule, individuals involved in serious crimes that resulted in someone’s death faced murder charges as if they were the killer, even if they had no intent or knowledge that a person would be injured or killed, or that a weapon was present. The landmark SB 1437 severely restricts the scope of felony murder in CA. Under the new law, only individuals who actually kill, who intend to kill, aid the actual murderer, or who show “reckless indifference to human life” during the course of committing a serious felony that results in murder, will face murder charges.

Justice for Juveniles and Students

SB 439, a bill to ensure that kids under the age of 12 are excluded from prosecution in the juvenile court system, unless they have been accused of murder or rape. Under the bill, introduced by Senators Holly Mitchell (D-Los Angeles) and Ricardo Lara (D-Bell Gardens), local law enforcement agencies will be responsible for diverting children younger than 12 from the juvenile justice system.

SB 1391 will ensure that all kids under the age of 16 will be kept out of the adult criminal justice system. Currently, 14- and 15-year-olds can still be tried as adults and sentenced to adult terms.

A school discipline reform bill, AB 2657, will prohibit the use of restraints or isolation on any kid in school unless a child’s behavior is posing “a clear and present danger of serious physical harm” to self or others.

The bill also requires school districts to collect data on the instances in which students are restrained or secluded.

In California, people in prison must have $1.00 or less in their “inmate trust accounts” for at least 30 days before they can be declared indigent, allowing them to access court resources (paper and notary services, for example) as well as medical, mental, and dental health care without having to pay a $5 copayment. Indigent inmates can also receive free hygiene products upon request.

This restrictively low indigence threshold prevents poor inmates from accessing the courts, threatens the health and safety of inmates and correctional staff, adds to the challenge of reintegration, and further burdens families, who are often primarily responsible for covering conviction-related costs,” according to Assemblymember Mark Stone (D-Monterey Bay).

AB 2533 will raise the threshold for inmate indigence to $25 or less. The bill also requires prisons to automatically provide indigent inmates with basic hygiene products.

Reducing Some of the Harm Done to Exonerees

Under current law, a person must continue to register as a sex offender, even after exoneration. One soon-to-be active law, SB 1050 will relieve sex crime exonerees from that requirement. The bill, by Senator Ricardo Lara (D-Bell Gardens), will also boost assistance and services for newly released exonerees to ease their transition back into their communities.

Current California law requires courts to add a 5-year sentencing enhancement onto a person’s base sentence for a prior serious felony conviction when that person is convicted of a new serious felony.

SB 1393 will give courts discretion to strike that 5-year sentencing enhancement, as of Jan. 1.