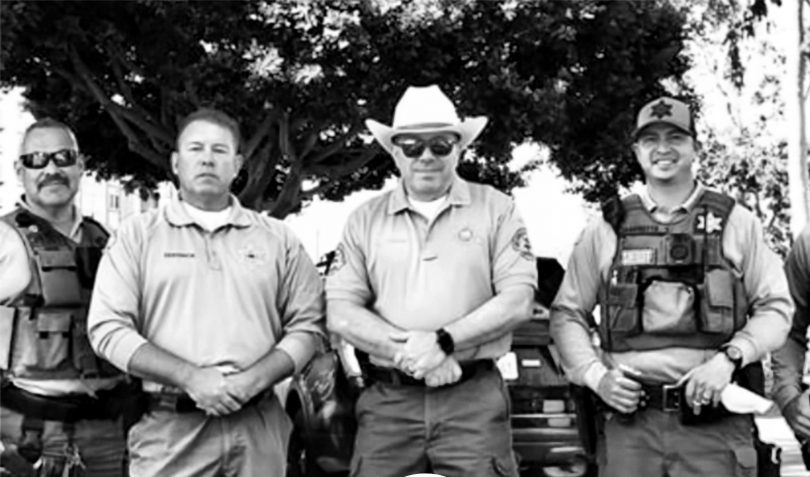 THE LAW: Alex Villanueva with other LASD members courtesy of https://alexvillanueva.org

by Jessica Pishko of Posse Comitatus

Over the past month, there have been two competing headlines about West Hollywood’s fight with the Los Angeles Sheriff’s Department. The LASD-approved one goes something like this:

Enter WeHo (West Hollywood) Public Safety Commissioner Nika Soon-Shiong. Her version goes like this: WeHo contracts with the LASD for policing services as one of 42 contract cities in Los Angeles County. Every fiscal year, WeHo, like every other contract city, renegotiates its contract with the LASD, which takes in hundreds of millions of dollars in revenue via these agreements. The proposed contract for 2023 INCREASED the LASD budget by a million dollars even though the LASD isn’t addressing the major issues in WeHo. (The biggest local crime complaint is cell phones stolen from clubs, yet the LASD recovered only 2 out of 249 stolen phones, despite “sting operations” involving up to 60 deputies.) One out of every five calls to the LASD in WeHo are related to people experiencing houselessness.

So this year, Commissioner Nika Soon-Shiong led WeHo to decrease the amount of the LASD contract for the next year and to use the savings for policing alternatives. The net result is five fewer LASD deputies on the streets, who will be replaced with 30 unarmed security ambassadors.

The decision appears to have taken Los Angeles Sheriff Alex Villanueva by surprise. In a public statement, he made what sounded like a vague threat: “It turns out a majority of people on the West Hollywood city council seem to think law enforcement is a freebie. But we can’t keep defunding and expect nothing bad is going to happen. There are consequences to defunding.”

Even O.J. Simpson weighed in as part of a rambling Twitter video: “I spent a little time in one of our institutions, and, trust me, we need police. We need the sheriff’s department.” (WeHo’s decision does not impact LASD personnel or hiring.)

No police force yet known appears capable of protecting us from the unintentionally ironic.

Commissioner Soon-Shiong researched the LASD contract and conducted a budget analysis to see just how much the LASD is making from the city. We had a short back-and-forth over email.  It appears below and is lightly edited for clarity:

Could you describe the structure of the WeHo contract with the LASD and what inspired you to take this issue on?

In addition to its annual $3.6 billion allocation from the county, the LASD contracts with 42 cities within Los Angeles County directly for service. An important lever for budget accountability is the contract negotiation process. At the beginning of each fiscal year, contract cities and the LASD agree to the levels of service set forth in Service Level Authorizations (Referred to as “575s”), which detail the number of positions associated with a Deputy Sheriff Service Unit; the number of staff for each position; the number of hours scheduled; the annual billing rate per hour; and the estimated total annual cost.

The service agreements between contract cities and the LASD are the only places where pricing and unit costs are broken down. This information is almost always shared as unreadable PDFs. Based on the LASD final 2021-22 budget, the average cost of a sheriff’s deputy, including salary and benefits, is between $175,000 and $206,000. We determined that WeHo pays around double this cost per deputy. (We have not been able to confirm that this cost is the same across contract cities because we cannot access all 42 of the 575 agreements.)

The Public Safety Commission is a local body that makes policy recommendations to the city council. It receives reports from the LASD and reviews the annual agreements. The Commission did not set out to challenge the contract, but from a series of basic questions about the agreement’s fundamental costs and benefits emerged an understanding of the opaque, contradictory, and unaffordable investment in the department.

Did you get any insights into the LASD contract city program that you think are interesting or troubling?

First, cities have very little insight – let alone control – over the costs of their yearly contracts.

For example, what we found in the contracting process was that the cost per deputy includes $70,000 for overhead, $102,000 for benefits, and around $170,000 in salary, on top of 11% of the overall contract designated for liabilities. When concerns were raised over this number, Sheriff Villanueva responded that the number “includes supervision, overtime, vehicle maintenance, fuel, utilities, computers, office supplies, etc.” But, none of this was specified.

This is a very opaque method of budgeting. It lumps all expenses together into a single category, preventing the public from answering a simple question: What is the personnel cost to WeHo for one sheriff’s deputy? Contract cities and the public have a legitimate interest, especially in times of rising costs, to know how much each component is costing them.

Second, the benefit of the contract is rarely discussed in terms of crime reduction or prevention.

It is really important to remember that crime prevention or reduction is not a key performance indicator of law enforcement contracts. There’s nothing in the contract to guarantee any specific result. And one in five calls to the sheriff in WeHo is to address a situation of homelessness or mental health. The majority of crimes in the city are cell phones pickpocketed at nightclubs. After two undercover sting operations, and with 60 deputies covering the two-square-mile area, LASD recovered only two out of 249 cell phones.

So, imagine a vendor asking for 1/6th of the city’s budget and 20% more each year to pay for an intervention that has no proven track record.

You faced resistance from other WeHo leaders as well as the LASD. Did you have a strategy for overcoming that resistance?

I think it’s incredibly valuable to ground discussions of law enforcement contracts in facts and data. Here are some of the ways that this effort anchored the contracting discussion in a framework of fiscally responsible policymaking.

What do you think other people could learn from this process?

The main challenge to success is the perception of insecurity and the fear of crime that law enforcement agencies stoke so effectively. With this in mind, there are a few lessons that have emerged for cities working to replicate this model:

What’s next for you?

I’ll be stepping down from the Commission to finish my PhD at Oxford, but hope to engage other contract cities around the process that was taken in WeHo. Most importantly, we should look to the efforts of coalitions across LA County to challenge the LASD’s monopoly over public safety budgets and narratives. I’d like to highlight the mobilization to pass an amendment to the sheriff’s charter (which was approved by the Board of Supervisors last week), as well as the work of the Civilian Oversight Commission to raise the issue of deputy gangs.

If you have not subscribed to Jessica Pishko’s stellar Posse Comitatus on SubStack, where this story originally appeared, please give yourself the gift of doing so. At WLA we are ardent fans and hope to be running lots more of Jessica’s work. But, if you subscribe to this reader-supported publication, you’ll get everything right away. So do it! You’ll thank us! We promise.

Photo of “the law” above courtesy of https://alexvillanueva.org