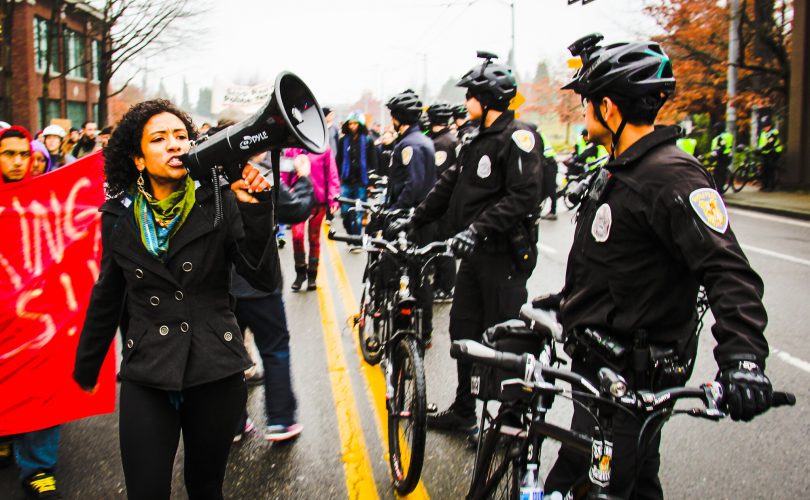 Working his beat on a rainy fall afternoon, Seattle Police Sgt. Eric Pisconski checked in with a man he knew was mentally ill. He wanted to see if he’d been taking his medication, a key piece of a court-supervised plan to improve his mental health.

“We’ve been familiar with (him) for the last few years and his behavior has been declining steadily and becoming more concerning,” said Pisconski, who heads a special unit focused on people in mental crisis.

“He can’t legally obtain a firearm but he has gone out and obtained very realistic replica airsoft firearms … and has attempted to prompt multiple officer-involved shootings.”

Police didn’t shoot the man, though. Pisconski credits officers for a “phenomenal job of de-escalation.”

But he doesn’t know how long the peace will last.

“The rub there is that, while he might have shown up on multiple occasions with a replica firearm, you don’t know when it’s going to be a real firearm,” Pisconski said. “You’re probably not going to find too many cops that are going to risk their life on, ‘Well it was fake last time, so it’s probably gonna be fake this time.’”

The situation exemplifies the nuanced reality for Seattle police, who have been under a court order to reduce their use of force since the U.S. Justice Department found that officers frequently treated people in unconstitutional ways. Seven years later, Seattle officers are using force a lot less — a reduction that has made the department a national model for police reform. But racial inequities in the use of force and concerns that officers are not always held accountable for misconduct have tempered some praise of the department. Officers and activists alike offer mixed reviews of the impact of the court order.

Seattle’s experience offers important lessons for California as the state adapts to new laws meant to reduce police shootings: requiring officers be better trained in how to de-escalate tense situations, and placing new limits on when police can use deadly force. As California lawmakers debated both bills earlier this year, civil rights advocates pointed to Seattle as a place that had benefited from a similar policy.

Seattle police have reduced their use of moderate and lethal levels of force by 60%, according to monitors tracking the department’s court-ordered reforms. (That includes shootings as well as other force that can cause injuries, such as tasers and batons.) The reduction followed a host of changes at the police department, including improved de-escalation training and a more robust use-of-force policy.

So in a generation, we have moved the needle.” – Seattle Activist Rev. Harriet Walden

Police in this city already had the word “necessary” in their policy, but it grew more detailed after the court order. It now says officers can only use force that is “reasonable, necessary, and proportionate” to bring a situation under control, while protecting the lives of officers and others. That’s similar to the new California law, taking effect in January, which says officers can only use deadly force when “necessary in defense of human life.”

Seattle’s experience “provides a pretty good indication of what we can expect” in California, said Peter Bibring, an American Civil Liberties Union attorney who advocated for California’s new law.

“A policy that restricts force to situations where it’s ‘necessary’ can reduce uses of force and do so safely,” he said. “I think that should hold true in California.”

But police shootings still happen in Seattle — including some that have been very controversial — and no officer has faced criminal prosecution in the seven years since the court order. Police remain more likely to use force on people of color than on white residents of Seattle, the court-appointed monitors found. And the federal judge overseeing the department has criticized its appeals process, which allows officers to be rehired after they’ve been disciplined or fired for misconduct. Seattle police rehired an officer who’d been fired for punching a handcuffed woman in the face.

“It’s not nirvana, so let’s be real,” said Rev. Harriett Walden, a Seattle activist who sits on the community police commission created in response to the court order.

On the other hand, she acknowledges some major improvements: Activists and police officials have learned to work together, and better record-keeping provides more information on which officers are using what types of force.

“This is a lot different than it was 30 years ago,” Walden said. “Wasn’t nobody talking about use of force (or) bias … It was standard police procedure and it was nothing you can do about it. So in a generation, we have moved the needle.”

Seattle’s rate of fatal police shootings is lower than that of many California cities, including San Francisco, Los Angeles, Sacramento, Fresno and San Jose, based on a CalMatters analysis of data from the Seattle Times and the Washington Post. And, importantly, Seattle’s experience suggests that law enforcement agencies can change in ways that make the public safer without putting officers in greater danger. Researchers found no increase in crime or injuries to Seattle officers as they decreased their use of force.

“There’s officers that are real worried that you’re going to become the center of media attention based on one decision.” – Seattle Police Sgt. Brian Kraus

“I don’t think that officers are getting injured, harmed, assaulted, or killed just because ‘necessary’ is in our use of force guidelines,” said Pisconski, the Seattle police sergeant leading the mental health response unit.

Sgt. James Kim, who is responsible for training Seattle police, said the new emphasis on de-escalation and promoting teamwork has made everyone safer.

Other officers disagree. “In some cases, it’s made the job more dangerous,” said Rich O’Neill, a spokesman for the Seattle police officers union. “Officers are hesitating in certain circumstances where they shouldn’t be.”

Sgt. Brian Kraus, who patrols downtown Seattle by bike, said he sees that happening, too.

“They don’t use enough force when enough force is needed… Even if they’re hit, they don’t respond appropriately,” Kraus said. “There’s officers that are real worried that you’re going to become the center of media attention based on one decision.”

The tremendous scrutiny, he added, has made some of his colleagues quit: “They don’t believe that they can do police work and they want to go somewhere that they feel that the city government is going to support them.”

Activists are similarly divided over how much the changes at the police department have helped. Five years after the court intervened, Seattle erupted in protest when police killed a pregnant African-American woman in her own home, with her children present. The police department’s investigation determined that the officers were justified in shooting Charleena Lyles because she pulled a knife on them after they entered her apartment.

She seemed stunned that advocates in California regard the Seattle Police Department’s use-of-force policy as a model.

“Are we really the model when we still have things to work on? I’m not sure it sits well with me at all,” she said.

Lisa Daugaard, an attorney who runs a nonprofit public defender office, said many people in Seattle still feel like police can get away with unnecessary shootings. “Community questions about whether those were avoidable are just as alive and just as valid as before the (court order),” said Daugaard, who served on the community police commission for several years.

“I think the department gets a ton of credit for innovation, openness to partnership, sensitivity to community concerns. But on this one question about deadly force, I would be hard pressed to say that something definitive has changed.”

This story, which originally appeared in CALmatters, was first reported for an episode of the Force Of Law podcast, in which reporter Laurel Rosenhall follows the creation of new California laws meant to reduce police shootings. Force Of Law producer Brian Howey and researcher Robbie Short contributed to this report.

Image of Seattle Police at a police brutality protest in 2015. By Scott Lum, Flickr.