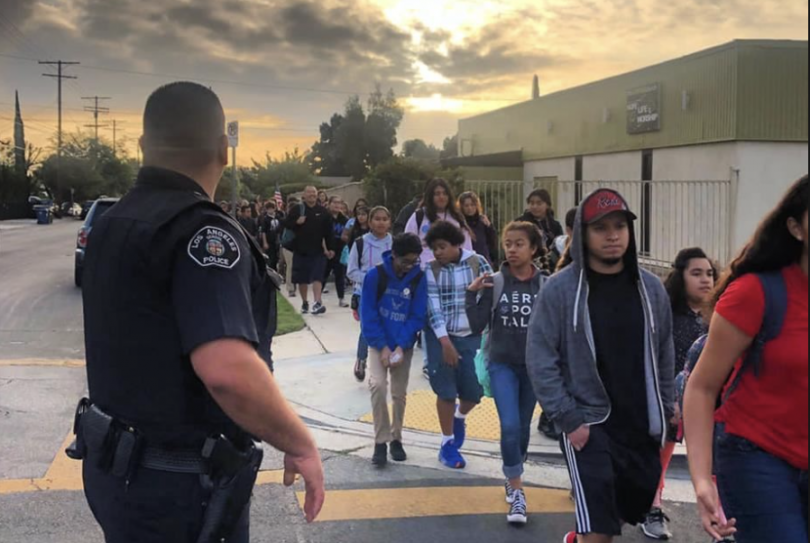 A new bill from Senator Steven Bradford (D-Gardena) seeks to reduce the criminalization of students in California’s K-12 schools, by among other strategies, eliminating provisions requiring schools to report students to the police for certain behavior.

“Under existing California statutes, educators are mandated to report a broad range of student behavior to law enforcement, including things as minor as possession of cannabis or alcohol,” according to Bradford’s office. “Teachers and other school personnel are denied the discretion to decide how to handle various kinds of behavior based on the specifics of the particular incident. The result is unnecessary student contact with law enforcement, leaving students less likely to graduate high school and more likely to wind up in jail or prison.”

Those disproportionately impacted by police involvement in school matters are Black students and other kids of color, as well as students with disabilities. These are the children most likely to be cited and arrested in schools.

Specifically, SB 1273 would eliminate from state law a requirement that school administrators report drug and alcohol-related incidents, leaving how to respond to substances on campus up to educators.

Existing law also states that any person who “willfully disturbs” a public school or school meeting is guilty of a misdemeanor and subject to a fine up to $500. This law has, Bradford’s office noted, “led to the arrest of a student for an offense as simple as knocking on classroom doors when class is in session.”

SB 1273 would exclude children enrolled in the public school from being subject to that misdemeanor.

The existing law, in this case, is “used to criminalize student behavior more appropriately handled through behavioral supports or school discipline,” according to Alliance for Boys and Men of Color, a co-sponsor of the bill. This bill allows educators to “take into consideration the totality of the circumstances” when deciding how to respond to student behavior.

Under SB 1273, educators would also be empowered to decide whether to report to police when a student attacks, assaults, or physically threatens any school employee. The problem in this case, according to the bill’s author and sponsors, is that even minor behavior deemed verbally or physically threatening must be reported to police under state law.

The bill does maintain a provision requiring schools to report to law enforcement a student who is in possession of or discharges a firearm in a school zone. Possession of certain weapons would be removed from the mandatory reporting rule, however, including things like airsoft guns, box cutters, and razor blades.

The bill also eliminates requirements for reporting kids to law enforcement before or after an expulsion or suspension for certain incidents.

The state laws SB 1273 seeks to change were enacted during the “tough on crime” era of the 80s and 90s, and extend beyond federal laws, according to the ACLU, one of the bill’s sponsors.

“Kids should feel comfortable and not traumatized at school,” Bradford said during a March Senate hearing.

The bill would make “several positive and 21st century changes to existing law,” according to Alliance for Boys and Men of Color, a co-sponsor of the bill.

This bill retains mandatory reporting to law enforcement if a pupil is in possession of or discharges a firearm in a school zone, or brings or possesses upon the grounds of a school, as defined, specified weapons, but excludes a violation involving an instrument that expels a metallic projectile, such as a BB or a pellet, through the force of air pressure, carbon dioxide pressure, or spring action, a spot marker gun, a razor blade, or a box cutter. Provides that notification only applies to a violation that where notification would be consistent with the requirements under the federal Gun-Free Schools Act.

The California State Sheriffs Association, officially opposing the bill, said that reducing school collaboration with law enforcement compromises student safety. “School officials and law enforcement should work collaboratively, especially when it comes to students whose behavior violates the law and jeopardizes school safety,” CSSA wrote. “Removing requirements that information about these incidents be shared with law enforcement runs counter to that notion and impedes law enforcement from being able to best protect our schools.”

The bill is scheduled for a hearing May 16 in the Senate Appropriations Committee.