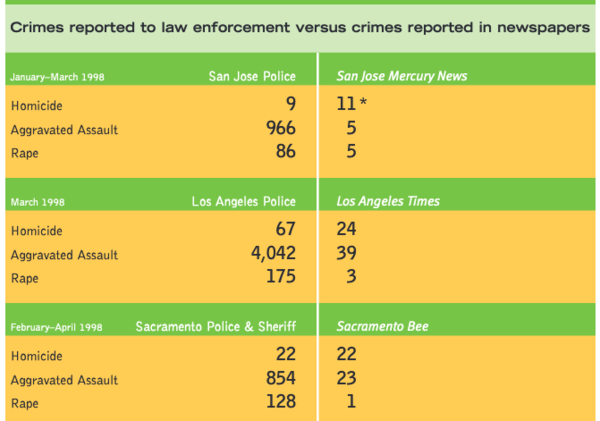 by Jane Ellen Stevenson of Aces Too High News

“Gannett launches a network-wide push to rework its crime coverage,” writes the Poynter Institute about the changes the largest newspaper chain in the country is making in order to “make its crime coverage more enterprising, rather than reactive.”

Among the changes the Gannett newsrooms are insituting, according to Poynter, are “fewer mugshots, additional context and moving beyond police narratives.”

It’s about damn time. We advocated this more than 20 years ago, and now we go a LOT further in our suggestions to make crime reporting more relevant, less racist, and more useful to communities.

The first, which came out in 1997, was distributed to more than 950 journalists and 100 newsrooms. I wrote the handbooks. Dr. Lori Dorfman, BMSG’s director, edited them. Together, we led the project, which was funded by the W. K. Kellogg Foundation and The California Wellness Foundation.

The immediate response was great—we did workshops in all the major newsrooms in California. But things didn’t change the way I’d hoped. A few news organizations included a few contextual questions in their reporting from time to time, but none changed their crime reporting. The data we gathered inspired the San Jose Mercury News (more info below) to do a series on domestic violence, but despite reporters asking to develop a domestic violence beat, the editors said no.

Remarkably, the basics of crime reporting haven’t changed much since the late 1890s (essentially, the man-bites-dog approach). Why is it taking so long for this change to happen? The irony is that although change is journalism’s bread and butter, getting the journalism community to modernize is like moving a mountain with a spoon and a bucket.

I am a longtime health, science and technology journalist. When I wrote the Reporting on Violence handbook, I’d been covering the epidemiology of violence off and on for several years, after the CDC began taking the same approach to violence and violence prevention as they had with smoking and smoking prevention, and motor vehicle accidents and their prevention. I realized that my profession was part of the problem in how the general public understood violence, and I wanted to do something about it.

Now Gannett is beginning to make some rudimentary changes. After two years of experimenting in its news organizations in Rochester, NY, and Phoenix, AZ, Gannett is rolling out these revisions across its 250 newsrooms.

“Gannett’s new approach to crime coverage, editors say, will focus on offering context, identifying trends and following stories to their end,” Angela Fu wrote for the Poynter Institute in an article published on August 9 on their site. The Poynter Institute is a journalism training and professional standards organization. “Journalists across the newspaper chain, the largest in the country, have been attending trainings this summer to learn how to be more enterprising in their crime coverage, rather than reactive.”

“Our goal is for the story to be fair to everyone involved and helpful — not harmful — to the communities we cover,” said P. Kim Bui, director for product and audience innovation at the Arizona Republic, a Gannett organization, in an article for the Republic. “But we can miss the mark. It’s critical for our newsroom to examine how we perpetuate myths or stereotypes because the potential for added and lasting pain is acute when we overhype or miscast details of a crime.”

Other news organizations are making a few very basic changes. The Associated Press will no longer name suspects in minor crime stories, and won’t use mug shots as a reason to post a story. The Boston Globe has Fresh Start, which allows people to submit appeals to remove their name and photo from articles.

These are minor changes, but it’s a start. And there’s so much more that a news organization can do to serve its community understand and prevent violence:

Scan the types of violence and other crime in your community to understand what crimes affects the community the most, in the trauma they cause as well as their economic cost.

Generally speaking, journalists report a small percentage of individual violent incidents at great length and with great precision. But, overall, the media provide an extremely inaccurate picture of crime in their communities, and how this violence affects their communities economically and emotionally. Although journalists are getting better at reporting about local violence prevention efforts, those efforts are generally not included as part of daily  coverage.

Cover the types of violence and other crime with a public health, or solutions-oriented, approach.

Report the ongoing status of different types of violence that affect the community the most so that a community can answer this question: Are we making progress in reducing this type of violence or not?

So far, the journalism community has not taken advantage of the new data, research and resources in this emerging field. For the most part, reporters continue to cover crime and violence by talking only to law enforcement and criminal justice officials and experts. They leave out public health experts who can provide violence prevention data, research and resources that readers and viewers can use to prevent the types of violent incidents that cause them and their communities the greatest harm.

In addition, news organizations report many fewer violent incidents than occur in their communities. “That’s what we do,” journalists respond. “We report the unusual.” Yes, but that’s not all we report. The news media regularly report the status of sports, business, political campaigns, weather and local entertainment.

By reporting the status of violence and adding information about the public health response to violence, journalists can uncover the two most hidden stories about crime in any community:

1. It’s the bulk of “ordinary” violent incidents that harm communities the most and cause cities to spend huge chunks of their budgets (hundreds of thousands to millions of dollars) on police, medical and social services.

2. People have and are developing predictable, effective methods to reduce and prevent violence.

In the second edition of the Reporting on Violence handbook, we included a sample health and safety website that showed what could be done. Keep in mind, it’s 20 years old, but the approach is still new.

Include training for all news organization staff in the science of positive and adverse childhood experiences (PACEs science).

Understanding why people do what they do can help journalists ask better questions, do better stories and help their communities solve their most intractable problems. Take this story, for example. A mother and her toddler daughter live in an apartment, and the mother’s brother moves in. While the mother’s at work, he does drugs, and a neighbor files a report with child welfare. Child welfare removes the toddler from her home and tells the mother she can be reunited with her daughter once her brother leaves or she finds a more suitable home for her daughter. A reporter who knows about the science of positive and adverse experiences (PACEs science) would ask why the child welfare agency didn’t help remove the brother or find safe housing for the mother and her daughter, instead of separating the mother and daughter, which severely traumatizes both.

The science of positive and adverse childhood experiences is at the foundation of all of our most intractable problems—arguably all violence and crime, as well as our system of incarceration, which is NOT based on PACEs science. Not only does the understanding of what happens to people in their childhoods provide the key to understanding about what they do—or don’t do—as adults, but it can help reporters understand how our systems, and systemic racism, contribute to the ongoing trauma that people experience.

With a PACEs science approach, they can also look for the solutions that are being put into place by the pioneers in this area, and, if those solutions aren’t happening in their own communities, ask “Why not?” 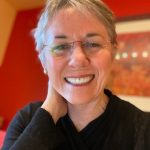 This story was first published in Aces Too High News, a news site that reports on research about positive and adverse childhood experiences, including developments in epidemiology, neurobiology, and the biomedical and epigenetic consequences of toxic stress.

Author Jane Ellen Stevens is the editor of ACES Too High, and founder and publisher of PACEs Connection, which comprises ACEsTooHigh.com and its companion social journalism network, PACEsConnection.com.