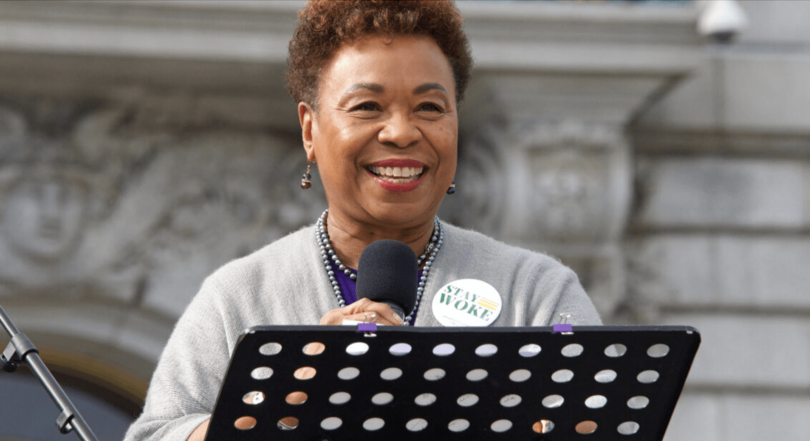 Editor’s note:  Due to WitnessLA’s non-profit status we cannot directly endorse candidates or suggest how you should vote on this or that issue.

Yet, we can bring you the points of view of others on specific candidates and/or issues, such as the upcoming recall vote on whether or not Governor Gavin Newsom should remain as California’s chief executive.

This essay on the topic written by Rep. Barbara Lee first ran in Black Voice News, which — like WitnessLA — is a member of  the CalMatters network of publications which offers our stories for republication..

We’ll have more on the recall later this week.  In the meantime, read on.

Just as it seemed we as a country were coming out of the COVID-19 pandemic, we find ourselves faced with another challenge as the Delta variant of the virus spreads more rapidly throughout our communities. On top of the pandemic, we are also heading into another fire season while many of our neighbors remain unhoused. We know that low-income Californians, people of color and women who take care of their families while also providing essential care for others are feeling a disproportionate share of these burdens.

It is during this time that Republicans have chosen to once again return to the Donald Trump playbook of political games by attempting to recall Governor Gavin Newsom and overturn his election without any merit or standing.

This recall effort – in addition to being completely baseless and a blatantly political power grab — is completely inappropriate during this period where we need to allow our elected leaders to handle very significant challenges. This recall election of the governorship alone will cost Californians $215 million in taxpayer money, money that could have been spent battling wildfires, developing housing, or combatting a pandemic that continues to threaten our health and public safety.

As a member of the House Appropriations Committee, I know how much Californians — and African American Californians in particular — have to lose from this Republican ploy. We know that recall supporters from the Trump camp understand they cannot win in a normal election, they are yet again using underhanded tactics to undermine our democratic elections. As we fight against voter suppression in Congress and in states like Georgia, we must realize that the recall election is the California version of that same Republican agenda.

Governor Newsom won his position in 2018 and has since set an example to the nation for what strong leadership can do in the face of crisis. Since the very beginning of this pandemic, we remember California was and continues to be looked upon as a gold standard for testing, vaccination, and virus protocols.

Governor Newsom has proven his ability to lead California through the pandemic, and his resume ensures he is more than up to the task of controlling the Delta Variant.

Now, the Trump-backed recall is setting its sights on dismantling all the work we as a state have done to keep this virus under control, and for no more than a political ploy to steal a governorship from the voters who put Governor Newsom in office. The good news is that we have faced these challenges before, we know the good work we are capable of doing.

Returning to a Sense of Normalcy

Although it will take time and a continued effort from our leaders to get through these crises, we will return to a sense of normalcy once again with strong leadership and good decision making as Governor Newsom and his team have already shown capable of executing. Ignoring these problems and instead being forced to deal with a completely unsuitable recall for Californians by Trump-backed groups is a recipe for disaster.

The ploy to recall the governor is one of several democratically elected positions that Trump-backed groups have targeted to recall. From progressive district attorneys to city council members and from California delegates to local school board members, these recall groups insist upon wasting taxpayer dollars, costing Californians hundreds of millions of dollars, just to win political games.

The Challenges We Face

These recalls are a waste of our money and are completely detrimental to overcoming the challenges we have at hand. Simply put, the recall effort of Governor Newsom and every Trump-backed recall effort will hurt Californians–not just our recovery from Covid but reproductive freedom, education funding, civil rights and other longtime conservative targets.

We have come a long way since the beginning of the pandemic, the early helplessness we all felt is finally transitioning to hopefulness. We cannot afford to forfeit all that we have worked for over petty political stunts. It is time to fight these recall efforts and ensure our leaders can focus on the issues that matter for the health, safety, and welfare of every Californian.

Women and people of color stand firmly behind Governor Newsom. We know that the health of our families, our neighborhoods and our rights depend on defeating the recall. We invite all readers to join us on September 14 — or as soon as you get your mail-in ballot — in voting NO on the recall.

This essay was originally published by Black Voice News, and is republished by WitnessLA under a Creative Commons license, and via the Cal Matters network of which WitnessLA is a member

The photo of Congresswoman Lee is used courtesy of Black Voice News.