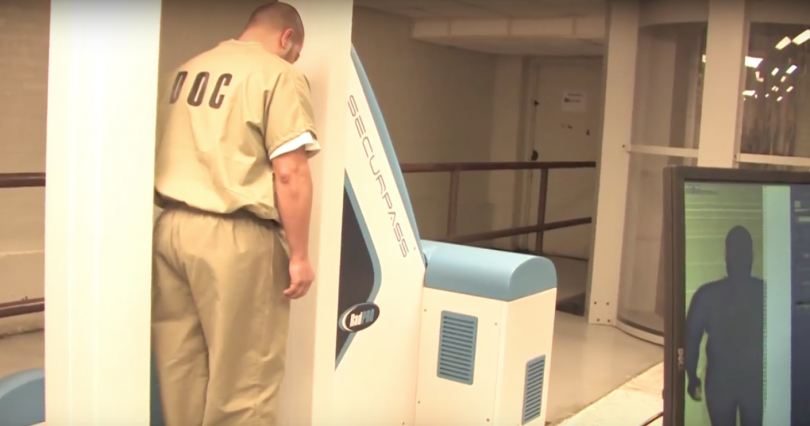 On Tuesday, the Los Angeles County Board of Supervisors unanimously approved a motion to collect data on the implementation of recently installed body scanners meant to detect hidden contraband while reducing the use of invasive strip searches in county jails.

In 2012, a U.S. Supreme Court ruling established that law enforcement officials have the right to “perform thorough searches at intake”–even for those arrested for low-level misdemeanor offenses—in order to detect “disease, gang affiliation, and contraband.”

In his dissenting opinion, Justice Stephen Breyer argued that corrections officers should have to determine that a person poses a safety risk before performing an “inherently harmful, humiliating, and degrading” search. “The harm to privacy interests,” Breyer wrote, “would seem particularly acute where the person searched may well have no expectation of being subect to such a search, say, because she simply received a traffic ticket for failing to buckle a seatbelt, because he had not previously paid a civil fine, or because she had been arrested for minor trespass.”

A retired LASD lieutenant told the commission that deputies strip-searched inmates in front of everyone to embarrass them for minor infractions.

And a former inmate at Pitchess Detention Center reported to the commission that deputies subjected him to seven strip searches in a row in the wake of a riot on the inmate’s floor. “When the inmate finally protested, he was handcuffed and left naked in the shower area for six hours until a Sergeant finally arrived on the floor,” the report states.

Additionally, in March 2010, two female former inmates at the LA’s Century Regional Detention Facility (CRDF) filed a lawsuit claiming that the LASD subjected female jail inmates to degrading searches without probable cause. The ongoing case, Amador v. Baca, has since expanded into a class action, with new members of the class still being added.

Another former CRDF pre-trial inmate Lecia L. Shorter accused LASD members of subjecting her to unnecessary body cavity searches, inaccurately classifying her as a mentally ill inmate, and shackling her for hours, mostly naked, to a cell door.

Last month, the U.S. Ninth Circuit Court of Appeal ruled that Shorter should be allowed to sue the county and LASD, and that a lower court’s dismissals of some of Shorter’s claims were improper. The appeals court panel reversed the lower court’s denial of a new trial.

Shorter “presented uncontroverted evidence that the County, tasked with supervising high-observation housing for mentally ill women, has a policy of shackling the women to steel tables in the middle of an indoor recreation room as their sole form of recreation, and that jail officials routinely leave noncompliant detainees naked and chained to their cell doors, for hours at a time without access to food, water, or a toilet,” the opinion stated.

Reducing the Need for Searches

In their 2012 report, the civilian commissioners recommended the LA County Sheriff’s Department follow the lead of other similarly-sized jurisdictions that had successfully reduced the need for strip and cavity searches by adopting full-body scanners.

The sheriff’s department launched a pilot program in 2014 to implement the scanners at the Inmate Reception Center, where inmates are first processed into the county’s jail system. The LASD hopes to “curtail the supply of
contraband entering custody facilities, and to provide additional privacy during intake and routine searches.”

A 2015 report from correctional consultants hired by the board of supervisors recommended adding a total of 18 body scanners at the Century Regional Detention Facility, the Inmate Reception Center, the Old Inmate Reception Center, Pitchess Detention Center–South facility, and North County Correctional Facility. The department followed the report’s recommendations, and all scanners were installed as of May 2018. Still, the county struggled to implement the full 2015 plan for the scanners.

Tuesday’s motion, authored by Supervisors Hilda Solis and Mark Ridley-Thomas directs the sheriff’s department, the county CEO’s office, the Office of the Inspector General, and other relevant county departments to report back to the board in 90 days with data that reveals how often body scanners are used at each of the jails. The supes also want to know how often visual scans and strip searches are being used, who is being subjected to the searches, who is conducting them, as well as when and why they are administered.

“I believe everyone agrees on the need to reduce and hopefully eliminate the need for strip searches, while balancing the need to identify and reduce contraband in the jails and preserve the dignity of inmates,” said Supervisor Solis. “With body scanners deployed in the County’s jail facilities, today’s action is about supporting our shared goals of safety, transparency, efficiency, and dignity.”

The motion directs county departments to report back regarding barriers to full implementation of body scanners (and thus, reduction of invasive strip searches), and recommendations for overcoming those barriers.

The supes want additional data on who, when, and why inmates refuse body scanners and opt for strip searches, and how the department is keeping track of this information.

The report should also include information on radiation exposure produced by the scanners, according to the motion, as well as any other recommendations for using body scanners in a manner that will “uphold the dignity” of inmates while keeping jails safe.

“By reducing the need to conduct strip searches for contraband, body scanners enhance the safety of both County jail staff and inmates while also promoting the dignity of inmates,” the motion’s coauthor, Supervisor Mark Ridley-Thomas, said. “We should examine and, where needed, strengthen implementation of the Citizen’s Commission on Jail Violence’s recommendations on body scanners, in order to make the most of what this technology has to offer.”