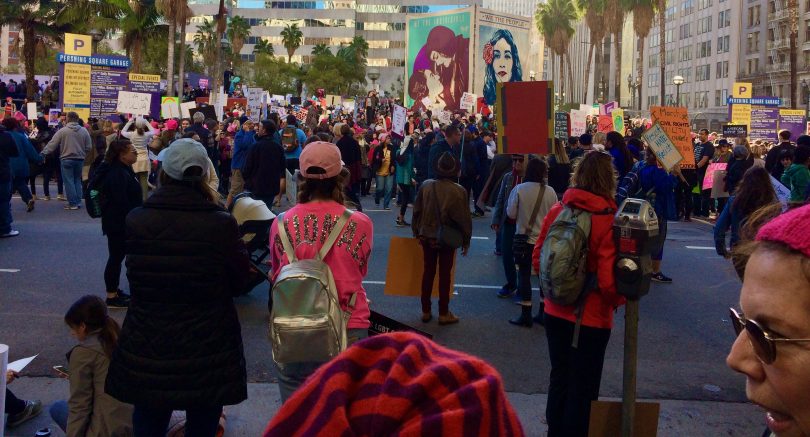 by Jenni Bergal of Stateline, an initiative of The Pew Charitable Trusts.

For nearly a century, jaywalking has been illegal in most states and localities. But several recent reports have shown that police in some areas disproportionately ticket people of color. And critics say citing people for crossing at the wrong place just gives them another reason to drive instead of walk.

“It doesn’t really improve safety. It’s part of a culture of blaming pedestrians,” said Mike McGinn, executive director of America Walks, a nonprofit pedestrian advocacy group. “And it’s used to make pretextual police stops that impinge on the ability of people to move about without being stopped, particularly in Black and brown communities.”

In the past two years, a few states have moved away from strict enforcement of jaywalking laws, making it easier for pedestrians to cross the street outside of a crosswalk or against a traffic signal without getting cited by police.

Virginia passed a law that prohibits officers from stopping a pedestrian just for jaywalking. Nevada no longer considers it a misdemeanor. And in California, the state Assembly approved a bill in May that would allow people to cross outside of an intersection when it’s safe to do so. The measure is now in the state Senate.

“The steps these states are taking are modest, but they are very significant. There is a new attitude. We have not seen this happening for decades, and now we are,” said Peter Norton, associate professor of history at the University of Virginia’s Department of Engineering and Society, who is an expert in the history of jaywalking in America.

But at a time when pedestrian deaths are on the rise, opponents of decriminalization say police should be able to issue citations to discourage people from putting their lives in danger.

An estimated 7,485 pedestrians in the U.S. were struck and killed by motorists in 2021—the largest number in four decades, according to an analysis by the Governors Highway Safety Association, a nonprofit that represents state highway safety offices. The group found that pedestrian deaths during the COVID-19 pandemic had spiked significantly, as speeding and impaired and distracted driving proliferated.

“When people walk out into a roadway, an officer should be able to intervene because they are impeding traffic and could injure themselves or cause a crash that could injure someone else,” said Dana Schrad, executive director of the Virginia Association of Chiefs of Police. “Our primary concern is public safety.”

Black, Hispanic and low-income pedestrians are more likely to be killed while walking. Between 2016 and 2020, Black pedestrians were struck and killed at twice the rate of non-Hispanic White people, according to a 2022 report by Smart Growth America, a nonprofit coalition of advocacy groups headquartered in Washington, D.C. The fatality rate in the nation’s lowest-income neighborhoods was nearly twice that of middle-income census tracts and more than three times that of higher-income areas, the report found.

“The lower the income of the census tract, the more likely a person is to be struck and killed while walking there,” the report states. “Poor walking infrastructure and a lack of safety features put people walking in low-income neighborhoods at higher risk, and many lower-income households do not have access to a vehicle and must rely on walking or public transportation to get around.”

While decriminalizing jaywalking may be controversial, in California the concept has gotten a lot of support from lawmakers.

Last year, both legislative chambers passed a measure that would have repealed the state’s jaywalking laws. But Democratic Gov. Gavin Newsom vetoed it, saying he had concerns about safety. Newsom cited state data that showed that about 30% of traffic deaths in the state in the past five years were pedestrian fatalities and that 63% of those were the result of pedestrians “taking actions against traffic controls or safety laws.”

This year, Democratic Assembly Member Phil Ting, the original bill’s sponsor, refiled a version of it, but worked with Newsom’s administration to make modifications. Rather than striking the jaywalking law, the measure passed by the Assembly this spring—dubbed the Freedom to Walk Act—would prohibit police from citing pedestrians for jaywalking if the road is clear and it is safe to cross.

“We make it much more clear about when an officer can cite someone or not,” Ting said. “It’s really whether there’s an immediate danger.

“We want more and more people to get out of their cars and walk,” he added. “Getting a citation is a big disincentive.”

A jaywalking ticket in California can run $197, and additional fees and penalties can be tacked on if the payment is late.

Groups supporting Ting’s legislation include the Lawyers’ Committee for Civil Rights of the San Francisco Bay Area, Disability Rights California and the cities of Alameda and Berkeley.

Opponents include the California State Sheriffs’ Association, the city of Thousand Oaks and the American Society of Civil Engineers’ California branch. The engineers group said that while it was sympathetic to supporters’ arguments about unequal enforcement of jaywalking laws, the measure would exacerbate crashes and degrade traffic safety.

“We cannot agree that the solution is to create a new ‘reasonably careful person’ standard that empowers pedestrians and others to decide if and when it is safe to cross streets, outside of legally established crossing areas,” Kenneth Rosenfield, the engineers group’s director, wrote in June.

Ting said streets are unsafe for pedestrians because of speeding and distracted driving, not jaywalking. He called decriminalizing jaywalking a matter of racial justice.

“In San Francisco, the highest amount of jaywalking has to be downtown, but I’ve never heard of anyone getting a jaywalking ticket. We’re all wearing suits,” he said. “Citations seem to have nothing to do pedestrian safety and everything to do with harassment.”

Ting points to an analysis of state data by the California Bicycle Coalition, which found that from 2018 to 2020, police in some California cities were nearly four and a half times more likely to stop Black pedestrians for jaywalking than White ones.

In New York City, an analysis of 2019 data by StreetsBlog found that Black and Hispanic people were getting about 90% of the tickets for “illegal or unsafe” crossing, even though they represented only 55% of the city’s population.

And a 2017 investigation by ProPublica and the Florida Times-Union found that over a five-year period, Black people in Jacksonville were nearly three times as likely as White people to be ticketed for a pedestrian violation.

Last year, Nevada Democratic Gov. Steve Sisolak signed into law a measure the legislature passed unanimously that decriminalizes jaywalking. Instead of it being a misdemeanor with penalties of up to six months in jail and a fine of no more than $1,000, the new law makes it punishable by a civil penalty of no more than $100.

The same month Nevada’s measure was signed into law, the city council in Kansas City, Missouri, voted unanimously to eliminate tickets and penalties for jaywalking.

Virginia’s new law, which went into effect in March 2021, bars officers from stopping and citing pedestrians solely for jaywalking. Jaywalking remains technically illegal in the state, but it now is considered a secondary offense, which means an officer would have to stop the pedestrian first for some other reason.

Schrad, of the Virginia police chiefs’ association, said her group opposed the change because it makes the jaywalking law unenforceable.

“For us, it’s like a non-law,” she said. “It says law enforcement cannot cite someone for a violation of the jaywalking law unless there’s another reason to stop them, like if they are drunk in public or disturbing the peace. That means they can’t intervene or save that person in a possibly dangerous situation.”

But the Insurance Institute for Highway Safety, a nonprofit research group funded by auto insurance companies, said the answer isn’t to go after jaywalkers; it’s to change the design of streets.

“It’s unlikely you can ticket your way out of the problem,” said Russ Rader, the group’s spokesperson, in an email. “The solution for safety is to look at how you can provide more and safer crossings for people in areas where jaywalking occurs more frequently, provide better lighting because a lot of the fatal crashes happen in the dark, and get vehicle speeds down to make collisions more avoidable or at least less severe.”

McGinn, of America Walks, likewise said that there needs to be better infrastructure for pedestrians, especially in lower-income areas.

“We’re focusing on the wrong things,” said McGinn. “The real issue is that we need to design our streets so cars move slowly and carefully and we prioritize the safety of the people walking in their neighborhoods and business districts.”

Author Jenni Bergal is a veteran journalist who covers transportation, infrastructure, and cybersecurity for Stateline. She has been a reporter at Kaiser Health News, the Center for Public Integrity and the South Florida Sun-Sentinel, and was supervising senior editor of “Weekend Edition” at NPR. Bergal has spent much of her career doing investigative reporting. She has won numerous national awards, including the Gerald Loeb Award for Distinguished Business and Financial Journalism, the National Press Club Consumer Journalism Award and the Worth Bingham Prize for Investigative Reporting and is a two-time Pulitzer Prize finalist. She is a co-author of the book, City Adrift: New Orleans Before and After Katrina.

This story was originally published in Stateline, an initiative of The Pew Charitable Trusts.