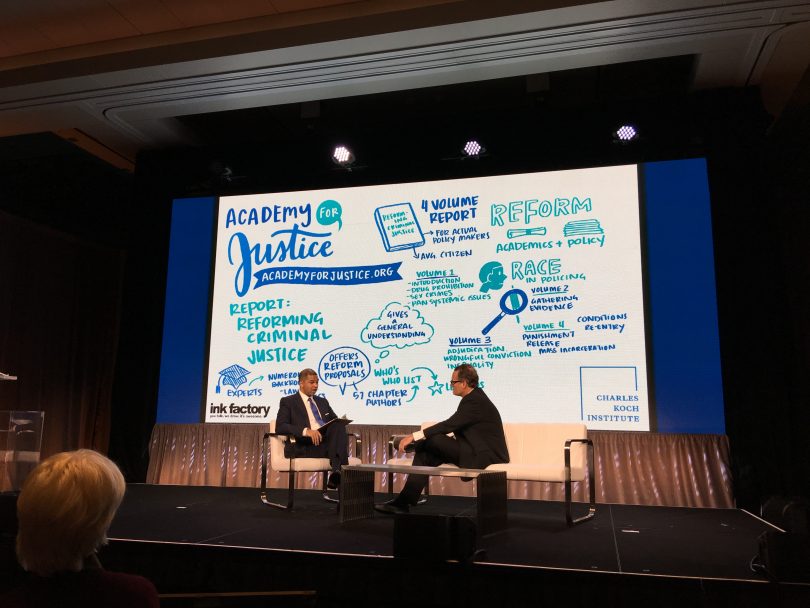 The Sandra Day O’Connor College of Law at Arizona State University has published an in-depth new report titled “Reforming Criminal Justice.” [See story on report here] The four-volume report was unveiled Oct. 26 at a national summit in Washington, D.C., which featured leading academics, members of law enforcement, community advocates, media figures, and others to discuss the most urgent priorities for criminal justice reform.

At the summit, the newly-released project’s editor and director, Erik Luna, answered questions from Vikrant Reddy, a senior research fellow at the Charles Koch Institute about what Luna and company hope to accomplish with the project, and which justice topics are widely agreed-upon in the academic community that many politicians don’t fully understand.

Vikrant Reddy: What is this project, exactly? I know it’s a book, but give me some more details. What’s the book about?

Erik Luna: “Reforming Criminal Justice” is a four-volume report authored and reviewed by scores of leading scholars in criminal law and other disciplines.

The contributions to this report describe the need for reform in particular areas of American criminal justice and suggest policy recommendations to achieve such change.

In particular, the report seeks to make the relevant law and literature accessible to those who might use this information in discussing and implementing criminal justice reforms.

The report’s primary audience includes those groups and individuals who can effect change either directly or indirectly — like the attendees at today’s summit — but also the average citizen who happens to be interested in criminal justice reform.

The goal is to fortify reform efforts currently afoot in the United States with the research and analysis of respected academics.

In this way, the report hopes to increase the likelihood of success when worthwhile reforms are debated, put to a vote or otherwise considered for action, and implemented in a criminal justice system.

By connecting the world of academics with real-world policy and practice, it is hoped that the report will help bridge the wide gap between scholarship on the books and the reform of criminal justice on the ground.

Reddy: Are the authors all lawyers (just like the two of us), or have you recruited authors from other disciplines too?

Luna: Most definitely — the participants came from numerous disciplines: criminology and criminal justice, economics and statistics, sociology and social work, psychology and psychiatry, public administration and health policy, philosophy and political science, and so on.

To be sure, there are a lot of law professors involved, which is unsurprising given the endeavor — seeking to reform a system of law and legal policy.

But many of the legal scholars have PhDs in allied fields and are considered experts in disciplines besides law.

And you have to keep in mind that law is inherently parasitic — think of law and economics, for instance, and law and psychology — and law professors who specialize in criminal justice may be the most interdisciplinary of them all.

Reddy: Sometimes academics are used to only writing for each other. How are you ensuring that this book will have a wider audience and actually be useful in the policy-making community?

Luna: You’re absolutely right. Traditionally, academic authors have written to themselves — that is, to other criminal justice scholars — not to the public or even to policymakers, professionals, or policy analysts interested in criminal justice.

As a result, academic scholarship has tended to be inaccessible in the sense that it is dense, filled with jargon, and, as a general rule, painful to read and unfriendly to normal human beings. Oftentimes scholarly works are physically inaccessible as well, published by academic presses and journals and buried in libraries or hidden behind paywalls.

The report is specifically designed to counter this — it is intended to be accessible in the dual sense that it is readily available to everyone, through our dedicated website, and that the prose is not loaded with legalese or its nerdy cousin, academese.

We hope the report can help the criminal justice reform movement in perhaps its most daunting task, namely, the gap in knowledge that exists among the general public and even among many government actors. Most people tend to be unaware of the character and quantity of crime, the scope of criminal law, the rules of criminal procedure, the reality of pretrial and trial proceedings, the nature of sentencing schemes and their severity, and the lasting consequences of conviction and incarceration. What is needed is a means to help people grasp the system’s workings and its many, interrelated problems, so Americans and their representatives can have a full and thoughtful discussion of possible solutions.

This is where academics have a role to play. After all, our work is fundamentally all about reform. Criminal justice scholars spend most of their time studying, critically analyzing, and writing at length about crime, punishment, and processes, with an eye toward providing greater understanding of the criminal justice system and proposing changes to that system. Not least of all, our primary university responsibility is to teach — and my hope is that the experience of our day job, teaching about the complexities of criminal justice, allows us to help the American policymakers and the public understand these issues as well.

Luna: As to the first question, I would point to the really exceptional chapters in the report on reasons why we punish in the first place. Politicians often assume that more incarceration equals more deterrence, but the empirical data does not back that up. As Daniel Nagin concludes in his chapter on deterrence, lengthy prison sentences cannot be justified on the basis of crimes prevented by deterrence, and the empirical evidence does not support the idea that harsh mandatory sentences have a meaningful deterrent effect. In fact, Shawn Bushway’s chapter on incapacitation shows that it is difficult if not impossible to justify harsh sentences based on the incapacitative effect of incarceration. If anything, the case for lengthy prison sentences must rest on retributive considerations, but if you read Jeffrie Murphy’s chapter on retribution you’ll understand that the theory of just deserts does not justify draconian sentences, particularly mandatory punishments. More than anything else, retribution provides a brake on sentencing, not a gas pedal. Pass your new lengthy mandatory minimum if you must, Mr. Lawmaker, but stop claiming that it’s necessary for purposes of deterrence, or for incapacitation, or for retribution.

As for your second question, I might answer with the flip side, which is that incarceration as a sanction is not some vestigial part of the criminal justice system like the human appendix, which can be removed without any real consequence. Incarceration has a role, and no serious academic believes otherwise, save some Scandinavian penal abolitionists. But what is well recognized by both academics and criminal justice reformers is that incarceration too often is the first option rather than a last resort. If we put the resources in empirical supported programs, we can avoid the socioeconomic and human costs of imprisonment through non-custodial sanctions, as discussed in Michael Tonry’s chapter on community punishments. We can also be much smarter in who we incarcerate, as shown in John Monahan’s chapter on risk assessment in sentencing. And when we must imprison individuals, we can do a better job in corrections – the depressing “nothing works” adage attributed to Robert Martinson is not true today. Read Frank Cullen’s chapter on correctional rehabilitation. There are things that work, evidence-based prison programs that can help reduce recidivism. There are academics out there who are doing the research – what we need to do is to bridge the gap between academics and real-world reform, and this report hopes to begin this process.

Reddy: OK, my last question is the most important one: If somebody wants a copy of this book, how do they get one?

Luna: It’s all available for free, online at academyforjustice.org.

This interview was originally published by the Arizona University’s Sandra Day O’Connor College of Law.