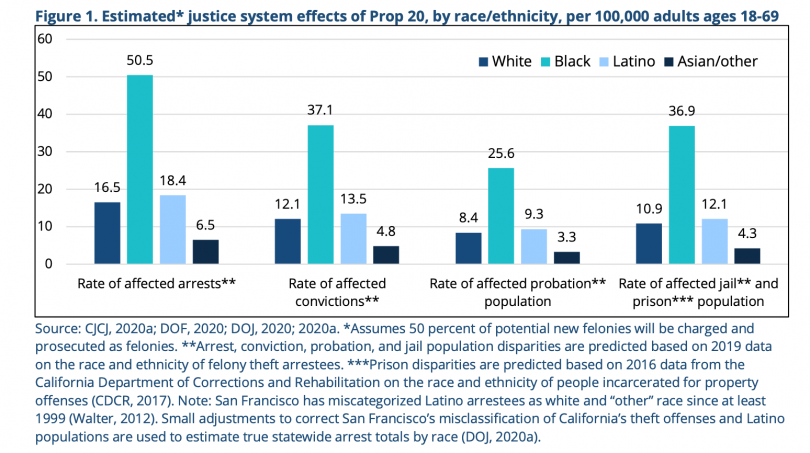 Proposition 20’s rollback of portions of recent criminal justice reform laws would have a disproportionately negative impact on Californians of color, according to a new report from the Center on Juvenile and Criminal Justice.

CJCJ’s Maureen Washburn and Mike Males based their fact sheet on race and ethnicity data for felony theft arrests and imprisonment for property crimes in California.

For those unfamiliar, the law enforcement union-backed Prop. 20 would, among other actions, rewind parts of Propositions 47 and 57, which have helped to reduce the state’s decades-long over-reliance on incarceration.

These laws have helped to save the state millions of dollars that would have otherwise been spent on incarceration, while also allowing California to stay below a federal court-mandated prison population cap of 137.5 percent capacity. At the same time, overall crime rates in California continue to remain at record lows.

In 2014, Proposition 47 reduced six low-level property and drug “wobblers” – crimes chargeable as either misdemeanors or felonies – to straight-up misdemeanors.

Under Prop. 47, people with certain priors including serious or violent felonies or sex offenses can still be charged with felonies when they commit the drug and property crimes included in Prop. 47.

Specifically, Prop. 20 would return unlawful credit card use, firearm theft, and vehicle theft to the wobbler category, allowing them to be charged as felonies, which means more people spending more time behind bars.

It would also require people convicted of wobblers and Prop. 47’s former wobblers to submit DNA samples for inclusion in law enforcement databases.

Prop. 20 would require anyone convicted of wobbler crimes, as well as Prop. 47 misdemeanors, to submit to having DNA samples taken and included in law enforcement databases.

The ballot initiative would also add two new crimes to the state code: serial crime and organized retail crime. These two crimes would be categorized as wobblers, as well.

Prop. 20 backers say that the measure would not put “any additional people in prison.”

Yet, the CJCJ report estimates that 3,000 to 6,000 new jail and prison terms would result from Prop. 20 and that an estimated 66 percent of those incarcerated would be Black, Latino, and other residents of color.

“These lengthy periods of incarceration would separate parents from their children, leave families without an income earner, and send substantial ripple effects through communities of color,” Washburn and Males write.

The measure would also have serious financial impacts on counties and states already dealing with budget cuts brought on by the pandemic.

An earlier June report from the Center on Juvenile and Criminal Justice estimated that measure could cost the state as much as $450 million per year in court costs and incarceration. The organization calculated that somewhere between 4,900 and 9,900 of those theft offenses could be charged as felonies, instead of misdemeanors. “This would result in an increase in court costs associated with new felony convictions ($15 million to $31 million), an increase in the cost of serving a larger population on probation with longer probation terms ($70 million to $232 million), and an increase in local jail and state prison costs resulting from additional incarceration ($69 million to $194 million),” the report authors stated. “Simply put, it is more expensive to convict and punish felonies than misdemeanors.”

The measure, which was applied retroactively, changed the circumstances of tens of thousands of Californians by freeing them from the collateral consequences of felony records.

Another potential casualty of Prop. 20, 2016’s Proposition 57, increased access to early release credits, as well as boosted parole eligibility for people convicted of certain crimes who have completed the base sentence for their primary offense.

Proposition 20 would add 51 crimes and sentence enhancements to the state’s legal definition of violent crime, which currently does not include felony domestic violence, child sex trafficking, rape of an unconscious person, or felony assault with a deadly weapon.

“Recent changes to parole laws allowed the early release of dangerous criminals by the law’s failure to define certain crimes as ‘violent,’ the measure’s introduction states. “These changes allowed individuals convicted of sex trafficking of children, rape of an unconscious person, felony assault with a deadly weapon, battery on a police officer or firefighter, and felony domestic violence to be considered ‘non-violent offenders.’” Prop. 20 would also add crimes like extortion, robbery, and possessing, exploding, or igniting a destructive device (even if that destructive device was only meant to be used to damage property, and even if it was only possessed — not used).

“Proposition 20 would come at a high cost to the state and counties,” the CJCJ report says. “Yet Californians of color would pay the greatest price with rates of arrest, conviction, probation, jail, and prison that far exceed those of white Californians. By rolling back progressive criminal justice reforms, Proposition 20 would exacerbate the harmful racial and ethnic disparities in California’s justice system and leave lasting negative effects on communities of color.”