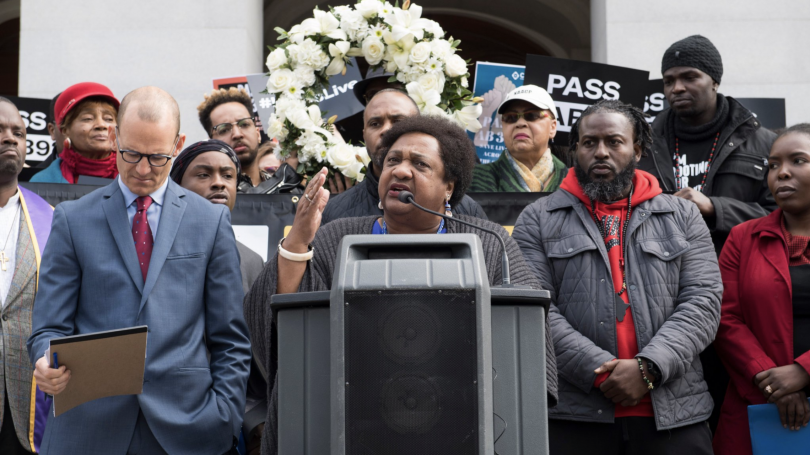 After appearing irreparably stalled last week, AB 392, a bill that would change the circumstances under which law enforcement officers can use deadly force, will move on to the Assembly Floor–thanks to some amendments.

On Thursday, after negotiating those amendments, law enforcement unions dropped their opposition to the bill.

Current law says that officers can use deadly force when “objectively reasonable”—when another officer with similar training and experience would have behaved similarly under the same circumstances.

“That’s a very squishy standard,” the ACLU’s director of police practices, Peter Bibring, said at a KPCC In Person forum on transparency in law enforcement.

“If I take you out to a park and want to show you a new kind of ball game, and you ask the rules, and I say, ‘You get it in the net and you do what’s reasonable,’ it doesn’t actually provide you with much guidance,” Bibring said.

The bill, authored by Assemblymembers Shirley Weber (D-San Diego) and Kevin McCarty (D-Sacramento), requires law enforcement officers to use force only when “necessary to defend against an imminent threat of death or serious bodily injury to the officer or to another person.”

Originally the bill defined “necessary” to mean “no reasonable alternative to the use of deadly force,” but the amendments wiped the definition away.

The somewhat watered-down bill, which would still give California one of the strongest use-of-force laws in the nation, has the approval of the ACLU, and other advocates, as well as California Governor Gavin Newsom.

“This is an important bill, one that will help restore community trust in our criminal justice system,” said Governor Newsom.

The bill is co-sponsored by a dozen organizations, including the ACLU, the Youth Justice Coalition, Black Lives Matter, and the Alliance for Boys and Men of Color, and officially supported by dozens more.