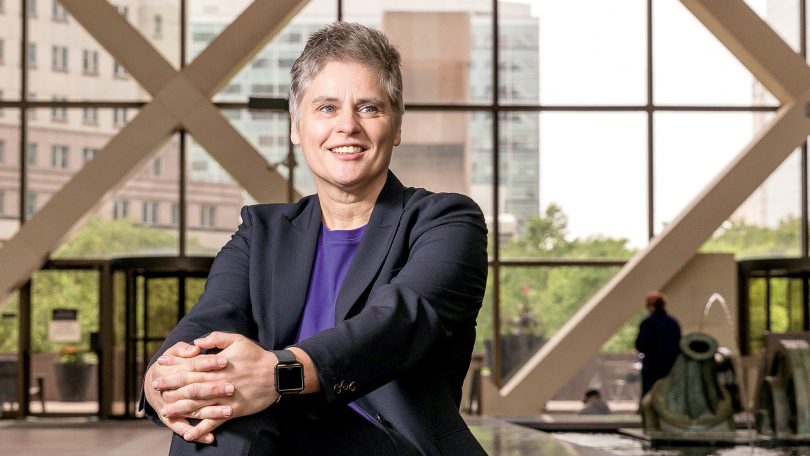 Mary Moriarty was the first public defender to be elected DA in Minneapolis. Photo courtesy of her campaign site.

Despite months of campaign ads bombarding voters with bodybag imagery, grainy crime- scene videos, and threats about dangers awaiting them if the “soft-on-crime” candidate prevailed, last week’s election results suggest that fear-mongering about crime was not a winning strategy and that voters’ appetite for justice reform remains strong throughout the country.

Nowhere was this fear-driven narrative more visible than in elected prosecutor contests. Yet in race after race – across red and blue states – the results underscore that communities don’t want to return to past failed practices that drove decades of mass incarceration.

In Polk County, Iowa, Kimberly Graham won her election by committing to reform the bail and juvenile justice systems, treat drug use and mental illness as public health issues, and to make central the voices of victims and survivors.

In Minnesota, Mary Moriarty was elected Hennepin County Attorney after previously serving as the county’s chief public defender. She ran on a platform that included promoting alternatives to incarceration and restorative justice, enhancing police oversight and addressing racial disparities.

And in Memphis, Tenn., Steve Mulroy won an eight-year term in August, besting tough-on-crime incumbent Amy Weirich – infamous for prosecuting a Black woman with a criminal record simply for trying to register to vote.

This pattern carried into resounding reelection wins. In communities that previously elected a reform-minded prosecutor and saw firsthand the impact of their policies, voters reelected DAs from Texas to North Carolina, Alabama to Indiana, Vermont to Missouri.

And in Washington, DC and Seattle, where reform-minded prosecutors didn’t seek reelection, voters are continuing the trajectory of reform.

Even with some races still to be called, come January, reform-minded prosecutors will represent nearly 20 percent of Americans.

We also saw voters across the country advance reform through ballot initiatives. Maryland and Missouri voted to legalize recreational marijuana, while Colorado voted to legalize certain psychedelics, delivering a huge win for the principles of harm reduction.

Michigan, California, and Vermont became the first states to enshrine the right to abortion in their states’ constitutions, Kentucky rejected a measure that would have denied constitutional protections for abortion, and Montana voters delivered a firm no to an anti-abortion ballot initiative.

All these wins came in spite of a concerted misinformation campaign that tried to blame reform-minded prosecutors and justice reforms for rises in crime, ignoring the unique conditions that led to these increases: record gun sales, a once-in-a-lifetime pandemic with mass loss of life and human connection, and nearly three years of economic uncertainty.

In fact, multiple studies have confirmed that the policies of reform DAs are notto blame for rises in crime. But when people are scared, fear often drowns out facts.

Unfortunately, politically motivated efforts to stoke fear did not end on Election Day. As tough-on-crime forces have failed at the ballot box, they have turned increasingly to undemocratic methods to strip local voters of the prerogative to choose their own prosecutor.

In Florida, Governor Ron DeSantis removed twice-elected Andrew Warren from office simply for telling his constituents how he would use his discretion and prioritize his office’s limited resources.

In Pennsylvania, the legislature is attempting to impeach Philadelphia District Attorney Larry Krasner just a year after he won reelection with nearly 70 percent of the vote, with his greatest support coming from communities hardest hit by violent crime.

In Los Angeles, DA George Gascón fought off two recall attempts but is still in a legal battle with unelected line prosecutors who have prevented him from carrying out some of the policies voters elected him to implement.

Several state legislatures have introduced, or are pledging to propose bills to limit discretion of locally elected prosecutors.

If politicians could end this partisan blame game, they could actually serve the constituents they represent, large majorities of whom support reform efforts across party lines. An October poll found that 80 percent of likely voters – including 74 percent of Republicans – support criminal justice reform and 58 percent would be more likely to vote for candidates who support change.

Yet, despite the broad support for reform – and communities choosing candidates committed to change – the deep-pocketed establishment seems more concerned with unjustly painting reformers as radicals than doing the hard work of creating public safety.

In truth, reform-minded DAs are just as committed to safety and accountability as traditional prosecutors, and their policies are grounded in research showing that reform makes communities safer and healthier.

In Change from Within: Reimagining the 21st-Century Prosecutor, we tell the stories of 13 of these reformers and look beyond the often inapt “progressive prosecutor” label and the sensational headlines to understand who these leaders are and how they have used their offices to change business as usual in the criminal legal system.

We hope these accounts will underscore the power of elected prosecutors who – in partnership with the community and those most impacted by violent crime and mass incarceration – can bring about a new vision of justice that so many want and deserve.

But prosecutors can’t propel change alone. Instead of pointing fingers at who is to blame for increases in crime and investing the vast majority of local and statewide resources in reactive responses to crime, we need policymakers and law enforcement leaders who will work together proactively and invest in preventing crime before it happens.

And we need to push back on the fear-mongering that is to no one’s benefit.

We hope that the visionary leaders elected on November 8, will help fuel these changes in their communities and that those who remain wedded to traditional tough-on-crime approaches will open their minds to a different – and safer – future.

Miriam Aroni Krinsky is the executive director of Fair and Just Prosecution, a former federal prosecutor, and the author of Change from Within: Reimagining the 21st-Century Prosecutor.

Alyssa Kress is the communications director at Fair and Just Prosecution.

This essay was first published by our friends at The Crime Report.

PS: And if you’re not reading The Crime Report daily, you’re missing out.