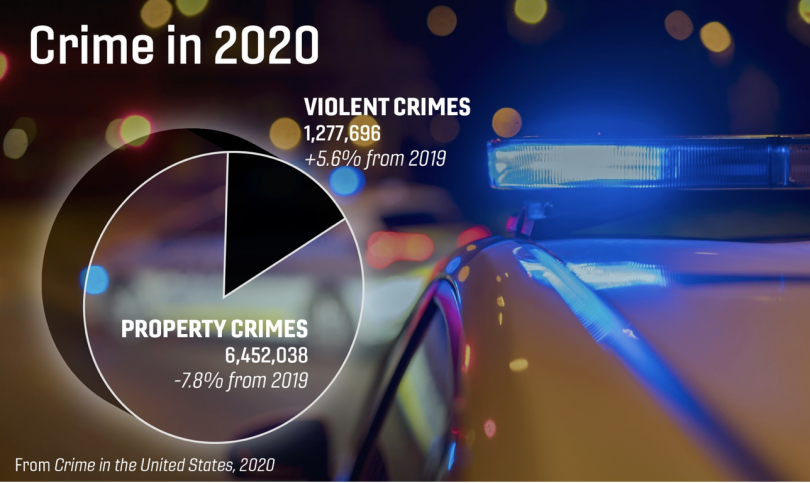 Editor’s note: On Monday, September 27, the FBI released the 2020 edition of its annual “Crime in the United States” report, which showed that, for the first time in four years, the estimated number of violent crimes in the nation increased when compared with the previous year’s statistics. In 2020, violent crime was up 5.6 percent from the 2019 number.

The 2020 statistics show the estimated rate of violent crime was 387.8 offenses per 100,000 inhabitants, and the estimated rate of property crime was 1,958.2 offenses per 100,000 inhabitants. The violent crime rate rose 5.2 percent when compared with the 2019 rate, while the property crime rate declined 8.1 percent.

Although the numbers were not exactly a surprise, the spike in violent crimes produced a flood of assumptions about what had caused the disturbing change.

The FBI’s crime stats are not perfect, mainly because they depend on regional law enforcement and tribal agencies to participate in the FBI’s Uniform Crime Reporting (UCR) Program. And while the majority of local agencies work hard to produce complete and reliable data for the UCR, a significate percentage do not participate.

(Specifically, of the 18,619 federal, state, county, city, university and college, and tribal agencies eligible to participate in the UCR Program, 15,897 agencies submitted data in 2020.)

Nevertheless, the FBI’s yearly report is still the gold standard.

So what messages should we take away from Monday’s release?

Our friend Miriam Krinsky, Executive Director of Fair and Just Prosecution,  has some smart things to say in answer to that question.

Last year brought a perfect storm of challenges: a once-in-a-lifetime pandemic that strained institutions and organizations that respond to and prevent violence; a devastating economic downturn that saw mass job losses and the shuttering of too many businesses; a record year for gun purchases; and a rise in police violence that led to fracturing of relationships between law enforcement and the communities they serve. This chain of events contributedto a rise in certain violent crimes in 2020, even as the overall crime rate decreased.

Those who remain attached to the failed ‘tough-on-crime’ approaches of the past may try to blame the increase in some crime statistics on the criminal justice reforms that voters are increasingly embracing and the calls for police reform that reverberated across the country in 2020. But these misleading claims are about the politics of fear – not policy. The data shows no connection between the tragic rise in homicides and gun violence and data-driven reform efforts. In fact, increases in homicides have occurred at similar rates in both cities that rejected reforms and those that pursued reforms. And in some cities led by reform-minded prosecutors – like St. Louis County and Baltimore City – homicides declined last year.

What we need now is not to point fingers and stoke fear, but instead to work together and embrace and learn from evidence-based strategies that promote public safety, starting with investment in the communities most affected by this surge of violence and the ongoing pandemic. We must expand proven anti-violence strategies, including confronting our nation’s gun problem, engaging and supporting our young people, and reducing the financial stress experienced by so many in our communities.