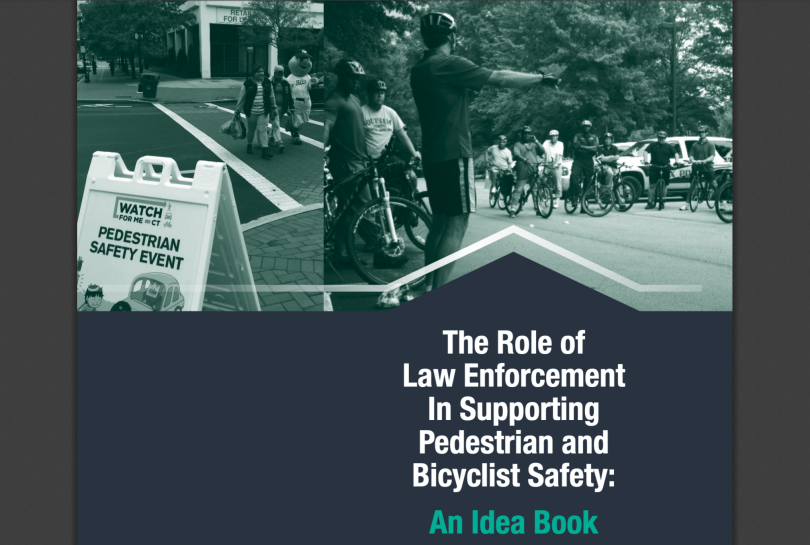 There’s just one thing missing from the federal agency’s “idea book” on enhancing police support for road safety: any acknowledgement of the existence of violent structural racism.

After months of nationwide protests against police racism and brutality, America’s top federal transportation safety agency insists in a new report that armed police enforcement can make pedestrians and cyclists safer — completely ignoring the ways that police themselves endanger non-White road users, and ignoring the countless advocates of color who have called for the removal of cops from traffic enforcement.

In early August, the National Highway Traffic Safety Administration quietly released an “idea book” for how law enforcement departments can use their influence make non-drivers safer on our roadways — but it doesn’t contain a single mention of race, racism, or the heavily-documented disparities in police brutality against people of color compared to whites.

The study authors, who are employees of the federally funded Highway Safety Research Center at the University of North Carolina at Chapel Hill, emphasized in an email to Streetsblog that the report was authored “over a year ago, and may not reflect some of the conversations or current practices we’re seeing across the country today.” For its part, NHTSA declined to comment on why the study was released this month, in the midst of a particularly visible wave of police brutality protests across the nation following the death of George Floyd and increasingly violent anti-protestor rhetoric from President Trump himself.

Of course, conversations about police brutality were far from invisible in the years when the NHTSA report was first written — and despite decades (and indeed, centuries) of activism from communities of color across America, Black people are still three times more likely to be killed by police than white people in the U.S. And because traffic stops are the most common reason for civilian interaction with the police, the roadway has famously been the setting for many of those deaths, including many of the movement’s largest flashpoints: the 2016 killing of Ferguson pedestrian Michael Brown by officer Darren Wilson, for example, is widely credited with inciting the Black Lives Matter movement.

The handful of Twitter users who caught wind of the buried report were disturbed that its authors would neglect to include any recommendations to end police brutality in the traffic realm. The “idea book,” while not legally binding, was funded by taxpayers and carries the endorsement of a major federal agency, and could influence policy in police departments across America.

The report doesn’t just fail to acknowledge a national conversation about how often police endanger pedestrians, cyclists, and other road users of color. It also fails to acknowledge how ill-prepared police forces are to end traffic violence more broadly — while suggesting reforms that would likely put even more money into police budgets that many activists are demanding that cities defund and reallocate to meet the needs of Black communities, whether in the realm of traffic safety or any other realm those communities identify.

The report, for instance, rightly notes that “poor roadway designs often increase the amount of non-compliance with traffic laws, increasing the burden on law enforcement who are called upon to respond to safety issues.” But instead of advocating for departments of transportation (which could actually build self-enforcing pedestrian and bike infrastructure) to get more than the pitiful 2 percent of federal dollars they currently receive, the Safety Administration advances this idea instead:

As eyes and ears of the community, law enforcement officers may identify traffic safety issues that can be corrected through changes to the built environment. When considering community partners, engineering and planning staff are key stakeholders as they are responsible for roadway configurations, plans for development or construction, and traffic operations and maintenance. A strong line of communication between enforcement and engineering bolsters both departments and allows for a better understanding of approaches that may be necessary to address pedestrian and bicyclist safety issues in the community.

Okay, let’s get this out of the way: no, even with an unconscionable amount of money for additional training, most police officers are unlikely to become qualified to identify road designs that are dangerous to non-drivers — something that even many transportation planners are not adequately trained to treat with any real urgency in their graduate programs.

But perhaps the most disturbing element of NHTSA’s statement is the casual assertion that police officers — a group with a long track record of demonstrated implicit bias towards people of color — can also serve as those communities’ objective “eyes and ears.” Even when officers are required to maintain residency in the communities they patrol — and even when Black officers police predominantly Black neighborhoods — researchers have found no evidence that community relations improve, or that police brutality rates decline.

That’s because police are paid to see their communities through the lens of the law enforcement bodies who employ them, with all those bodies’ institutionally violent, racist policies and cultural norms clouding the lens. And if they choose to view the people they police through the lens of a neighbor looking out for the safety of a fellow neighbor, experts say, they won’t be rewarded for it at work.

“Departments emphasize quantitative performance: metrics that place more value on crimes solved, arrests made, and tickets written than on harder-to-measure accomplishments, such as dangerous situations diffused or avoided,” wrote law professor Barbara Armacost in the Harvard Business Review. “By rewarding aggressive actions — which may even be dubbed heroic — this system undergirds a style of policing that can escalate police citizen confrontations.”

To its credit, the NHTSA report does call out some of the ways that institutional policy sets cops up to fail pedestrians and cyclists, often from the day they enroll at the police academy. The researchers noted that the typical officer training program devotes just one week to studying the enforcement traffic laws, and often less than one hour to exploring “pedestrian and bicyclist laws or issues.”

But what the Administration seemingly doesn’t consider are the many safety downsides of creating more occasions for contact between civilians of color and cops over traffic enforcement — or whether such negative reinforcement would be better performed by a piece of inexpensive road infrastructure rather than a person with a gun and a badge.

Pulling a driver over for violating a cyclist passing law, for example, simply isn’t as effective as supplying cyclists with a protected bike lane that makes it physically impossible for a driver to threaten a cyclist’s life. And when it comes to enforcing failure to yield laws to keep drivers from running over walkers at intersections, a 2017 study found that the impact of expensive and labor-intensive “high visibility enforcement” efforts were “not statistically significant” — but road design interventions like lowering speed limits and using bump-outs to shorten crossing distances did work.

Nonetheless, the UNC report repeatedly suggests that a little officer training can cure almost all ills — and they even encourage police departments to make cops the trainers of school crossing guards. Only a few pages after admitting that law enforcement officers receive embarrassingly little training on “pedestrian issues,” and that cops have trouble interpreting “often nuanced and complicated” pedestrian laws, the researchers claim that “outreach during crossing guard training would allow enforcement to reiterate laws, regulations, and safe behaviors to share in the field.”

That’s a disturbing departure from the guidance of other safety groups like the Safe Routes to School Partnership, which recognized the problem with tasking poorly trained and often inherently biased cops with keeping kids safe on the streets, and removed police enforcement involvement from its official recommendations to program participants in June. In an interview with Streetsblog, the director of the group noted that the decision was easy, as “more and more groups [we work with] just don’t associate the police with safety.”

(The non-profit Safe Routes to School Partnership, it should be noted, is not the same as the National Center For Safe Routes to School, a federally-funded institute which is housed in the same University of North Carolina department that employs the authors of the NHTSA report; the government-backed Safe Routes group is still recommending law enforcement involvement in school transportation programs on its website.)

Thinking beyond the badge

Throughout its report, NHTSA consistently fails to consider both how the legacies of police brutality have harmed public trust in policing as an institution, and how ill-equipped police departments are to perform the many and varied functions of maintaining a safe road network by their very nature — particularly for people of color and non-drivers for whom police brutality itself can be a barrier to mobility.

But the report authors seem hamstrung by the idea that police simply must perform all those functions — and failed to imagine a world beyond that dangerous status quo.

“In crash scenarios that include a pedestrian or bicyclist fatality or injury, law enforcement officers usually act as first responders, and within their role, conduct crash reporting and data collection, work with the victim’s family, and even respond to media requests,” said contributing author Kristin Blank in an email. “In developing this resource … we offer points of entry for officers to focus on pedestrian and bicyclist safety concerns, while respecting the values and needs of the community, illustrating how training, crash data reporting, collaborating with traffic engineers, and community engagement efforts, can all help advance road safety, and potentially help in building community trust and partnerships.”

That’s a long list of tasks to demand of any single professional — and many of them could arguably be better performed by departments that don’t have such a violent legacy in communities of color, much less ones that aren’t also tasked such a vast and varied range of safety responsibilities beyond the traffic realm.

Maybe we shouldn’t give cops the task of protecting pedestrians and cyclists on our streets from the ever-growing threat of traffic violence at all. Because too often, they’re the ones causing that violence, particularly towards non-whites — and when they’re not, it will still take way more than just enforcement to save our lives.

Kea Wilson is the senior editor at Streetsblog, where this story first appeared.