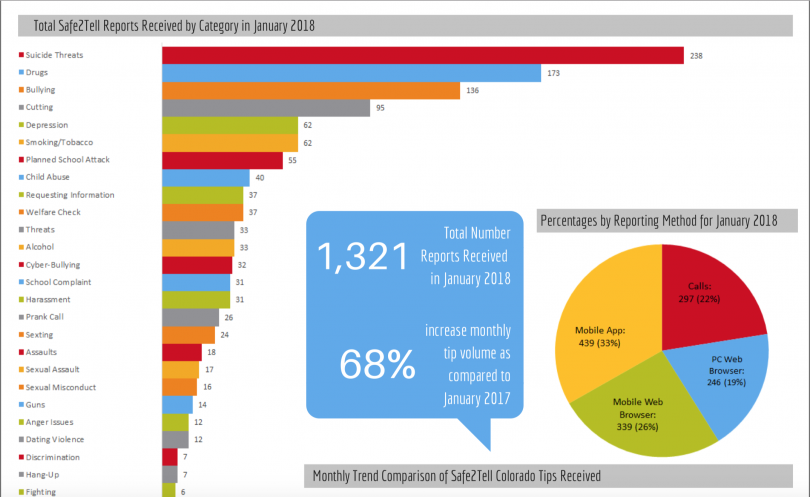 In the days after the tragic shooting at Stoneman Douglas High School in Parkland, Florida school that left 17 people dead, it is has become clear that the massacre might have been prevented if each tip authorities received was taken seriously so that trained personnel could take appropriate action in response to credible information.

We now know that the Broward County Sheriff’s Office received at least 18 calls about the troubled teen and shooting suspect Nikolas Cruz over the past decade. Records of calls about Cruz to the Broward County Sheriff’s Office reveal that in February 2016, neighbors contacted the sheriff’s department to say they feared Cruz “planned to shoot up the school” after posing for Instagram photos with firearms. The FBI admits it received a Jan. 5 tip-line warning about Cruz’s gun ownership, desire to kill people, erratic behavior and disturbing social-media posts, as well as references to carrying out a school shooting — but failed to share the info with its Miami field office.

Sadly, not all rumors of school shootings are reported or, as we now know, acted upon appropriately. Research shows that in 81% of violent incidents in U.S. schools, someone other than the attacker knew something about the shooter’s plans but failed to report what he or she knew. After the April 20, 1999, mass shooting at the Columbine High School in Jefferson County, Colorado, then recently elected governor Bill Owens convened a commission to analyze the circumstances of the shooting and to make recommendations that could prevent future incidents. The Columbine Review Commission criticized law enforcement officers for not heeding significant warnings that contained worrisome information about shooters Dylan Klebold and Eric Harris. The bloodshed could have been averted, the report concluded, if experts had intervened.

One of the most important findings of the commission was that there was a “prevailing culture” of a “code of silence” among students who may have been aware of the impending threat of attack. In the Columbine incident, the attackers posted threats and expressed their thoughts on websites in what researchers termed “leakage.”

The Commission recommended that a statewide hotline be created where anyone could safely report threats. In response, the State of Colorado developed a statewide, uniform, cohesive and coordinated program titled, “Safe2Tell.” Safe2Tell, enacted in 2004, is a hotline for students, teachers and parents to make anonymous tips about threats of school violence, suicide, bullying, and more.

Colorado’s Safe2Tell takes reports made by calling a designated number, filling out a form online, or through a special app. The Colorado State Patrol receives each report, and then passes it along to local law enforcement, the school in question, and the relevant school district.

The Safe2Tell program has emerged as a key resource to keeping Colorado students safe. So why hasn’t the successful program that allows anyone to anonymously report threats, violence, and other potentially dangerous situations been adopted in California?

As the Association for Los Angeles Deputy Sheriffs recently noted, in California, there is no uniform method for alerting authorities of school threats. In many communities, where school police departments exist, it may not be clear to most people if they should report a threat to the school police, the local police department, or the FBI because there is no centralized place to report threats, and no centralized system of follow-up and accountability.

Recently a school resource officer at El Camino High School in Whittier heard a student make verbal threats that he was, “going to shoot up the school sometime in the next three weeks.” After law enforcement obtained a search warrant, a search of the student’s bedroom revealed that he had more than enough weapons and ammunition to make good on his threat. Los Angeles County Sheriff Jim McDonnell said that deputies seized two AR-15 rifles, 90 ammunition magazines and two handguns, including one assault rifle that was unregistered.

Last year high school students in Fullerton were arrested for plotting a school shooting that would be “bigger than Columbine.” Fortunately, someone who knew of the plot alerted a school resource officer of the planned attack.

In those two cases, a possible tragedy was averted. But in 2008, when 14-year-old Brandon McInerney shot and killed 15-year-old Larry King in the computer lab of the boys’ English class in a Ventura County middle school, those who might have known of McInerney’s rising shame and rage, did not report it. Perhaps if a system such as Safe2Tell had existed, one boy would not have died, and a second boy would not have been sentenced to 21 years in a California state prison.

Safe2Tell ensures that every student, parent, teacher and community member have a way to discreetly report any concerns about their safety or the safety of others. In Colorado, Safe2Tell received 9,163 reports of planned school attacks during the 2016/17 school year. The data from January 2018 shows that suicide threats were the number one report (238) that month compared to 55 reports of planned school attacks.

The system that has stopped bomb threats, suicides, murders, and people from getting continuously bullied or threatened is not perfect. A number of false reports have been made because someone did not like someone else. However, the anonymous online, telephone, and text message system continues to save lives and has even won the support of the ACLU, which tried to expand the program to Mississippi.

While not every report is credible, the program has assisted in preventing hundreds of threatened school attacks, helped to prevent thousands of possible youth suicides, along with causing expert interventions in cases of bullying, sexual misconduct/sexual assault, and other dangerous or harmful situations. In short, Safe2Tell has been effective in creating safer schools and safer communities.

While certain school districts across the country have ad-hoc programs, there is no comprehensive reporting program in California and, unfortunately, there are no standards for passing on information about potential attacks planned in other jurisdictions or how to follow up on those clues. Furthermore, it is not clear how someone living in one school district could report a pending attack in another district or a private school.

With a small dedicated, well-trained staff, Safe2Tell manages intelligence gathering and sharing of information through a sophisticated dissemination process from the state level to the appropriate responders at the local level. In the case of a threat of a school shooting, the centralized program makes certain that the appropriate responders are notified and that they track and coordinate the intervention at the school level, ensuring that law enforcement coordination problems are reduced.

To spread the Safe2Tell message, in Colorado they created a Train the Trainer program that certifies individuals to present Safe2Tell classroom discussion materials in schools, to promote the program’s effective use. Certainly, California is larger and more populous than Colorado, and such a program here would require more staff. But given the potential benefits, bringing Safe2Tell or something like it to our state should be a bipartisan goal of our legislature.

Colorado’s Safe2Tell is run by the Attorney General’s office and has an annual budget of about $300,000. Enacting innovative and thoughtful programs like Safe2Tell in California would clearly cost more, but with the annual costs associated with youth violence exceeding $161 billion in the United States, it would be money well spent.

It’s time for California to take the lead on this crucial issue.

Richard Webb retired as a commander in the Los Angeles Police Department after 35 years of service. While at the LAPD, he was one of the developers of the multiple location active response protocol for the department. Webb has a bachelor’s degree in public affairs from the University of Southern California, and a master’s degree from American Military University, where his thesis was on school shootings.