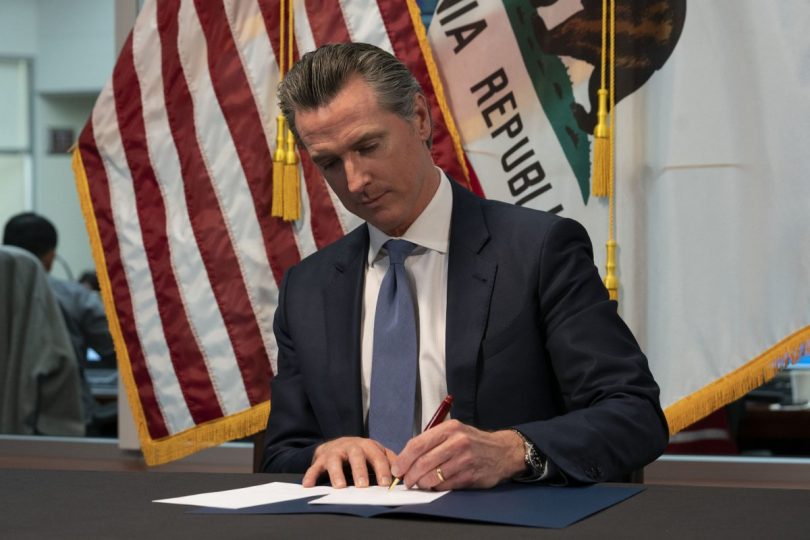 As we head toward the new year, WitnessLA has compiled a list of 10 of the justice-related laws that will activate on January 1, 2023, plus one that will go into effect six months later, on July 1.

Limiting the death penalty and guarding against racially biased convictions

AB 256, by Assemblymember Ash Kalra, applies retroactivity to the Racial Justice Act, a bill introduced in 2020 to reduce racial bias in the courtroom. The Racial Justice Act officially prohibited the use of race, ethnicity, or national origin to obtain convictions and sentences, and opened a pathway for individuals to file a writ of habeas corpus or a motion to vacate a conviction by demonstrating that “the judge, an attorney in the case, a law enforcement officer involved in the case, an expert witness, or juror exhibited bias or animus towards the defendant because of the defendant’s race, ethnicity, or national origin.” The 2020 bill, however, only applied to cases in which judgments were entered after January 1, 2022.

AB 256 will allow imprisoned people to apply for relief, with eligibility expanding in stages over the course of three years. Individuals who are facing deportation or who are sentenced to death will be eligible to apply starting January 1.

A notable conviction relief bill, SB 1106, would ensure that unpaid restitution debt would not preclude an otherwise eligible person from clearing their record.

This is important, the bill text notes, because 80 percent of people who come into contact with California’s criminal legal system are low-income, and judges are not required to take a person’s ability to pay into consideration when determining what restitution requirements will be imposed.

A study of 15 California counties’ restitution data showed that the median amount judges ordered individuals to pay was $12,000 in direct payments and fines.

Because the justice system is packed with low-income people, including people criminalized for the conditions of poverty, just 13 percent of the restitution dollars ordered to compensate crime survivors is ever collected.

Moreover, the system is stacked against Black people. In Los Angeles County, Black residents make up eight percent of the population, but are required to pay 20 percent of all restitution ordered.

Women also bear a disproportionate restitution burden, in that they are ordered to pay 2.5 times more than men.

A related bill, SB 731, expanding access to record relief even further than SB 1106, will go into effect later in the year.

Starting on July 1, 2023, people accused and convicted of low-level crimes, who have not been convicted of a subsequent felony in the four years after the completion of their sentences and any post-release supervision, will have their records automatically sealed. The new law will exclude violent felonies and crimes that require a person’s inclusion on the California Sex Offender Registry.

This bill, according to lawmakers, could benefit more than one million people in California.

Allowing a conviction to sunset means that people convicted of crimes are not punished for them decades after being officially punished with imprisonment. Post-release punishments include being barred from jobs and obtaining professional licenses, being denied housing by landlords, exclusion from public assistance programs, and thousands of legal restrictions.

Under SB 1008, people detained in California’s prisons and jails will be able to make free phone calls to their family and friends.

This new law will reduce some of that burden, and ensure that families can more easily stay connected.

In February 2022, an investigation by USA Today revealed that, for more than seven years, the SFPD had been keeping the DNA of sexual assault survivors and uninvolved individuals like consensual partners and roomates — anyone from whom the department had collected DNA during the course of an investigation — to cross-check it against evidence from other crimes.

A bill to ban that practice, SB 1228, authored by Sen. Scott Wiener, will go into effect on January 1.

Police agencies have also long been criticized for their lack of transparency and timely communication with families after the death of a loved one.

A second bill, SB 1268 will ensure that, in the case of a death investigation involving a minor child, police are required to provide parents with certain timely information about the investigation. Specifically, the investigating law enforcement agency would have to give parents the case number, identify the primary police contact for the investigation, a list of personal effects found with the victim, and information regarding the status of the case (at the agency’s discretion).

AB 2147 allows pedestrians to jaywalk (or cross the street outside of an intersection) without being ticketed, as long as the crossing is done in a manner that a reasonably careful person would consider safe.

In other words, a police officer would be able to stop and ticket a pedestrian who has crossed the street when “a reasonably careful person would realize there is an immediate danger of collision with a moving vehicle or other device moving exclusively by human power.”

The hope is that this bill will make it harder for police to use jaywalking as a pretext for stopping and questioning and/or searching people (usually Black and brown people). The new law will also likely reduce the number of people burdened with hefty fines — approximately $250 — for crossing the street mid-block.

Under another bill to reduce disparities, SB 357, law enforcement officers would no longer be able to enforce a section of the penal code that leads to the disproportionate arrests of Black and transgender people when officers deem them to be loitering “with the intent to commit prostitution.”

Black individuals make up just 8.9 percent of the population in the City of LA, yet accounted for 56.1% of such loitering charges in the city between 2017-2019.

SB 357, also called The Safer Streets for All Act, allows people who have previously been convicted of this loitering offense to submit a petition for resentencing or dismissal, and to have their records sealed.

The bill, does not legalize sex work, Newsom wrote in his signing letter. “It simply revokes provisions of the law that have led to disproportionate harassment of women and transgender adults.”

Finally, AB 2799, will limit prosecutors’ ability to use artists’ creative expression — rap lyrics, for example — as evidence against the artist in court.

People who experience pregnancy loss or have an abortion will be protected from criminalization, too, thanks to AB 2223.

In 1970, California legislators added the “unlawful killing” of a “fetus” to the state penal code’s definition of murder. Lawmakers intended to create criminal legal consequences for individuals who killed a fetus inside another person. But, in a handful of California cases, prosecutors have used the law to prosecute women who may have lost pregnancies as a result of drug use.

While it is “not a crime to have an abortion, miscarriage, or experience pregnancy loss. .. [and] despite clear law forbidding these charges and protecting the right to make decisions about pregnancy, Californians have been charged with homicide offenses for pregnancy losses,” wrote AB 2223 co-sponsors, ACLU California Action, Black Women for Wellness, California Latinas for Reproductive Justice, If/When/How: Lawyering for Reproductive Justice, NARAL Pro-Choice California, and Planned Parenthood Affiliates of California.

“AB 2223 protects reproductive freedom by clarifying that the Reproductive Privacy Act affirms people’s right to be free from investigation, prosecution, and incarceration based on their pregnancy outcomes: whether they have an abortion or experience a pregnancy loss.”