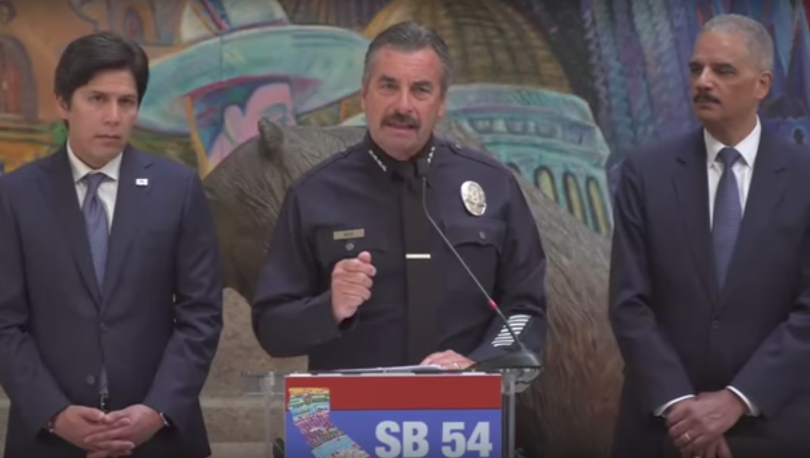 “Our officers enforce criminal violations of state and local law and we are not responsible for the enforcement of immigration status violations,” Chief Beck said. “This Act allows the LAPD to fulfill its mission to keep the community safe, while still maintaining the Department’s ability to continue cultivating the trust of our residents.”

The bill does not, however, stop law enforcement officers from complying with warrants to transfer immigrants who have committed violent crimes into federal custody.

“A warrant requirement will ensure the government confirms a person’s identity and whether they are subject to deportation before they can be detained, thereby preventing citizens, authorized immigrants and victims of crime from being jailed,” said San Francisco District Attorney George Gascón, who has also come out in support of the bill.

Addressing concerns from law enforcement, the bill’s author, Senator Kevin De León, amended the bill to allow law enforcement agencies to continue to participate in federal task forces, as long as they are not focused on immigration. The bill also requires California’s Parole Board or the CA Department of Corrections and Rehabilitation (CDCR) to give ICE 60 days notice when inmates who have committed violent felonies (or who have prior violent felony convictions) are going to be released.

Beck joins a number of other law enforcement officials and prosecutors who are standing behind the bill.

Holder argued that SB 54 “fully complies with the Constitution and federal law.”

“As a sovereign State, California has the constitutional authority and responsibility to allocate its limited state resources to those areas of greatest significance to the safety and well-being of its residents,” Holder wrote. California is not required, in other words, to divert those resources and compromise its security to enforce federal immigration laws.”

Santa Cruz County Sheriff Jim Hart, another SB 54 proponent, said “public safety is not enhanced when local law enforcement officers enforce immigration laws or act in a manner that causes suspicion within the diverse communities we service. SB 54 provides a clear delineation between local law enforcement and the federal government and will strengthen trust with all of the communities we are sworn to protect and serve.”

For the past 20 years, Sacramento has barred its police officers from asking people about their immigration status.

“Sacramento is no different from many cities in California,” Sacramento Police Captain James Beezley said in support of SB 54. “We face budget challenges to provide the services that our residents expect and to ensure fiscal stability for the city in future years. We do not have the resources to spare when it comes to enforcing immigration laws.”

Critics, including LA County Sheriff Jim McDonnell, worry that SB 54 “goes too far.” Some argue that individual agencies already have rules in place that keep ICE from overstepping boundaries.

The amended bill is currently working its way through the Assembly’s committees, after which, it will head to the floor for a vote.

Another bill, SB 421, aims to solve some of the major problems created by California’s current sex offender registry.

In California, currently the only state with a lifetime registry in place, there are more than 100,000 people publicly registered as sex offenders.

The bill, authored by Sen. Scott Wiener (D-San Francisco, would create a tiered sex offender registry based on the seriousness of a person’s offense and their risk of reoffending.

SB 421 has garnered support from victims rights groups as well as the Association of Association of Deputy District Attorneys (ADDA), the California Police Chiefs Association, and the Los Angeles Police Protective League.

“California’s current sexual offender registration law is woefully inflexible,” said Michele Hanisee, ADDA President. “A person who engages in a minor offense is treated the same as the worst offender.”

Individuals would not be removed from the registry automatically at the end of 10 or 20 years, but would have the opportunity to petition to be removed from registry under specific conditions.

The district attorney would then be able to request a hearing on the petition.

Tier three individuals would also be able to petition to be moved to tier two if they meet certain requirements.

“We support this legislation for a number of reasons,” Hanissee said. “A tiered system based upon the nature of the offense, the age of the offender and the likelihood of re-offense, is just to the offenders and to the public the system is supposed to protect.”