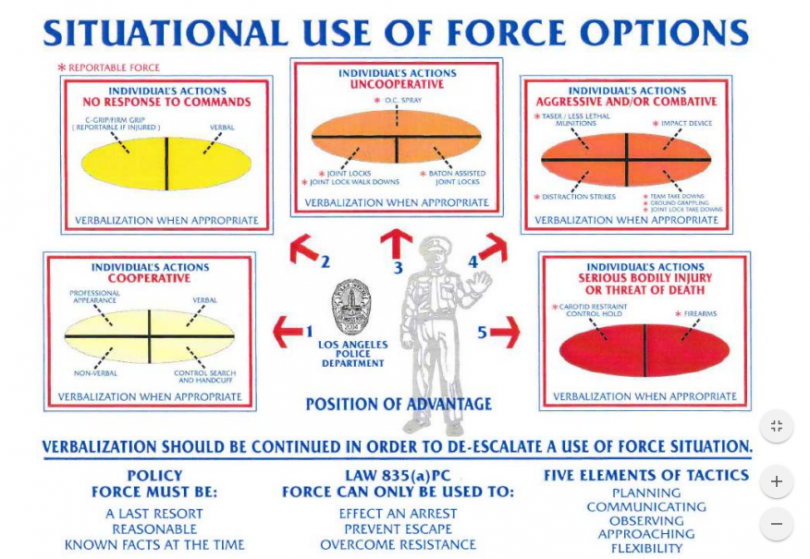 On Tuesday, the Los Angeles Police Commission adopted new a new use of force policy that requires officers to try to de-escalate a situation before resorting to deadly force.

In a letter to the police commission, LAPD Chief Charlie Beck said the new policy was developed in “conjunction with a review of use of force policies from law enforcement agencies throughout the country.”

The new policy requires officers to “attempt to control an incident by using time, distance, communications and available resources in an effort to de-escalate the situation, whenever it is safe and reasonable to do so.”

In a 2016 report, the Office of the Inspector General directed the police commission to revise its use of force policy.

In 2009, the LAPD use of force policy was rewritten and consolidated. It removed “language to indicate that deadly force should be used only when necessary, or as a last resort, or that alternative options must be exhausted or appear impracticable,” the OIG said in its report. “The elimination of such language has the effect of making the current policy more permissive, removing the mandate that officers use available alternate means of resolving a potentially deadly encounter, such as by moving to a safer position when confronted by a person armed with a knife, or by using a less-lethal weapon in place of a firearm.” The changes to the use of force policy “implicitly broadened authority for the use of deadly force to situations where alternative courses of action may be available to the officer,” the report read.

The OIG said the policy must include “attempts at de-escalation whenever feasible as one of the factors for determining the reasonableness of an officer’s use of force.” The OIG also called for a use of force policy that established that “deadly force shall only be exercised when reasonable alternatives have been exhausted or appear impracticable.”

Chief Beck said the new policy was developed through meetings with the OIG and other stakeholders, including the police commission’s Use of Force Subcommittee, experts on the subject of use of force, and the Los Angeles Police Protective League.