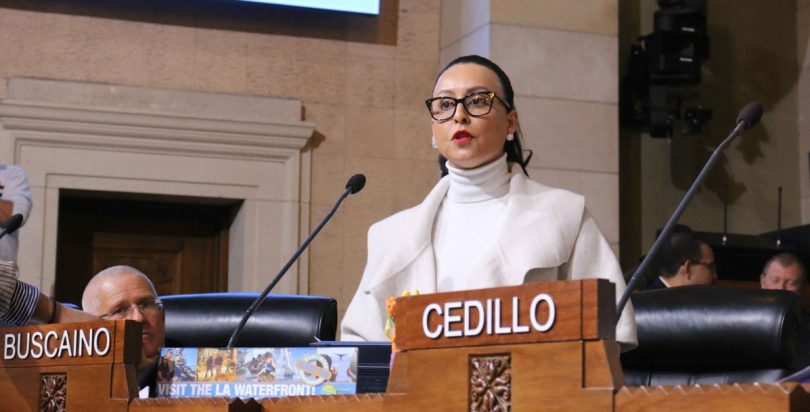 On Tuesday, the Los Angeles City Council passed a temporary ordinance that it appears will act to successfully block the opening of a federally-funded detention center to hold migrant children who have been separated from their parents.

The proposed lock-up for immigrant kids was to be located at a now-vacant former nursing home located in Arleta, CA, north of Sherman Oaks, near to the intersection of Nordoff St. and Woodman Ave.

The motion, introduced by City Council President Nury Martinez, was the councilwoman’s second on the topic.  Martinez opposed the child detention project early and introduced her first motion in November, asking the city staff for a thorough review of how Los Angeles might legally block the project, and what additional approvals might be needed to do so.

Her second motion was the one approved and implemented on Tuesday.

“As the proud daughter of Mexican immigrants, I am completely and strongly opposed to any prisons for immigrant children in our city run by so-called ‘discipline therapy’ experts – especially in a community like Arleta – a predominantly Latino community,” said Martinez in an emailed statement.

“It is a slap in the face in all ways imaginable to immigrant children who need love, kindness, and understanding. They do not need to be further traumatized by President Trump and a federal government that separated thousands of children from their parents, and then lied about it.”

The proposed youth detention facility was to be overseen by a firm called VisionQuest, which has been mired in controversy for decades due to a disturbing number of youth deaths and credible accusations of physical and emotional abuse starting in the 1980s and 1990s when the company was making millions running programs for at-risk and lawbreaking adolescents.

In 1994, for example, a report by the Civil Rights Division of the U.S. Department of Justice, described staff frequently “punching and hitting juveniles in the face,” along with the “frequent use of headlocks headbuts [sic], and choking restraints,” in one case rendering a boy unconscious “causing him to urinate on himself and to spit blood.”

The emotional abuse that the DOJ report and other accounts described was equally alarming.

Furthermore, the accusations of abuse have continued in recent years.  In 2017, the city of Philadelphia closed down a group home for kids after state inspectors documented incidents of staff physically and emotionally abusing children in their care, calling them names, and promising to “make life a living hell” for them, according to inspectors.

Evidently ignoring the firm’s years of problems, in July 2019, the federal government handed VisionQuest “more than $25 million in four grants over three years to hold hundreds of the unaccompanied minors in its custody in California, Texas, Arizona, and New Mexico.

One of the planned California locations for VisionQuest was the Arleta site.

Prior to the big new 2019 grant, VisionQuest got some other large piles of federal cash from the feds, such as an $8.5 million grant in 2018 to run a secure facility for migrant children in Philadelphia.

The company’s representatives claimed that they had solved all their problems after the Philly youth shelter was closed in 2017.  Yet, after a long hard look at VisionQuest’s overall record, Philadelphia didn’t buy the sales pitch and turned the Arizona-based company down.

In November, San Antonio, TX, also shut down the company’s bid to open a for-profit detention center for migrant boys between the ages of 11 to 17 years old.

Last summer, the state of New Mexico was similarly rejecting of the company’s plans for another facility to hold migrant kids, this one to be located in Albuquerque.  The project was thrown into doubt, according to the Albuquerque Journal, after the for-profit operator was accused of having “purposefully withheld details about violations at one of its other facilities.”

(For more on VisionQuest and its plans to make big bucks from regional lock-ups for migrant kids, see WitnessLA’s earlier story.)

As mentioned earlier,  the ordinance that was approved Tuesday is temporary. It will initially be active for 45 days from its date of adoption on February 4. But the city council has the power to extend the ordinance for a period of 10 months and 15 days, after which time it is subject to a second extension of an additional year.

This means that, in total, the new rules “prohibiting the construction or operation of private detention centers and community detention facilities for unaccompanied minors in the City of Los Angeles” may be extended for two years, by which time one presumes VisionQuest will have packed its corporate bags and gone elsewhere.

It is unlikely that the city will need the two years, however, as the council is expected to have a permanent ordinance ready for passage in two to three months, at which time there is little doubt that it will be approved.

“The City of Los Angeles will not help VisionQuest, or any other private business, profit off of the anguish and misery of children,”  said City Council President Martinez.

Photo at top of Council President Nury Martinez courtesy of the councilwoman’s office.