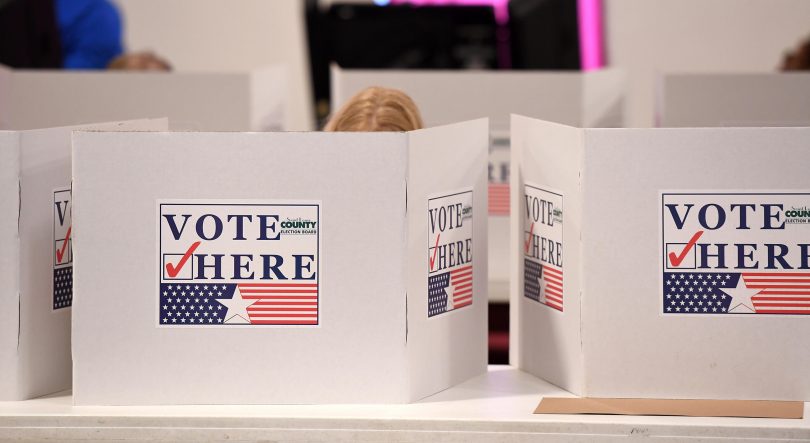 by Kevin Keenan and Karina Schroeder

This November, an estimated 6.1 million Americans will be unable to vote due to their involvement with the criminal justice system.

But a person and a voting machine are not constitutionally deactivated when placed behind bars—and Americans who are incarcerated do not automatically lose their sacred, democratic right to vote.

Nor do Americans lose their right to vote simply for being arrested. Americans awaiting trial in jail who are not yet convicted of an offense still have the right to vote. And—in at least three U.S. jurisdictions—people in prison can also vote. This is a policy that jurisdictions everywhere can and should emulate.

Americans do not lose their citizenship when convicted of a crime, and the U.S. Constitution gives states the power to let people in prison vote. Maine and Vermont do so. So too does the commonwealth of Puerto Rico. In those places, people in prison register in the town where they last resided and vote by mail with an absentee ballot. This policy has support from both Republicans and Democrats. A spokesman for the Maine Republican Party told NBC News, “The last thing we want to do is start putting up insurmountable barriers to participation in civic life because someone may have been convicted of a crime. People’s right to vote is sacred.”

Most of the momentum and public attention has been around restoring the vote for formerly incarcerated people, such as the Florida ballot initiative that aims to restore voting rights for more than one million voters with conviction histories.

(Editor’s note: As of 6 p.m. Pacific Time, Tuesday night, it looks as if the Florida initiative has passed.)

There is also new momentum to encourage individuals incarcerated and awaiting trial in jail to exercise their right to vote. Award-winning artist and activist Common recently led a visit to register voters in one of the largest jails in the nation, L.A. Men’s Central, as part of an ACLU of Southern California campaign called Unlock the Vote. These efforts are also finding increasing support from government officials, including in Los Angeles County and New York City.

But even for people convicted and currently serving time in prison, there is a hint of progress. In 2016, California passed a law, sponsored by Assemblymember Shirley Weber, allowing people convicted of felonies but serving their time in county jails—rather than state prisons—to vote starting in 2017 (AB 2466). People serving time in state prison for the same offenses, however, remain disenfranchised. A ballot initiative to restore voting rights to people in prison and on parole in California failed to gain enough signatures to get on the ballot in 2018, but Initiate Justice, the organization backing the bill, is continuing to educate the public on why we should not disenfranchise any American.

New Jersey is also considering legislation to allow prison voting (S2100). “There is no relationship between voting and committing crimes. To disenfranchise those who have made mistakes and are paying for them is wrong,” said New Jersey Senator Ronald Rice. Racial equity is an important motivator as well. “As a result of racial disparities throughout the criminal justice system, half of those denied the right to vote are black, even though black people make up only 15 percent of the state’s total population,” noted Ryan Haygood, President and CEO of the New Jersey Institute for Social Justice.

In Ohio, the Cleveland Plain Dealer endorsed giving people in prison the vote, arguing it would allow people to “maintain their connections to society as members of the communities they call home.”

This feeling of connection to the civic right and duty to vote was affirmed by several voters incarcerated in Vermont and Maine prisons. “To be able to vote made me feel as part of a community, like that I’m not just a convict, that I’m a human being,” one person told a reporter in 2016. Another said, “It was one thing I could do that I can have control of, the one thing that could let me feel that I can make a difference in something. . . . I grew up in prison and voting helped me learn responsibility.” It led him to discuss politics and form bonds with correctional officers and other incarcerated people.

Whether one’s motivation is that voting should be an inalienable part of civic rights and duties, to promote racial equity, or to enhance successful reentry, let’s hope that more jurisdictions embrace voting rights, both in and out of prison. Kevin Keenan is the Executive Vice President and Special Counsel for the Vera Institute of Justice. In this role, Keenan helps lead Vera’s efforts to tackle the most pressing injustices in our criminal justice system today, including work on emerging issues at the intersection of technology and justice. In addition, he supervises Vera’s demonstration projects Common Justice, The Guardianship Project, and New Orleans Pretrial Services.

Karina Schroeder is a communications associate at the Vera Institute of Justice. She edits Vera’s web content, reports, and publications, and manages a number of projects including Vera’s annual report and The Human Toll of Jail storytelling series. This essay first was published on the Think Justice Blog for the Vera Institute of Justice.