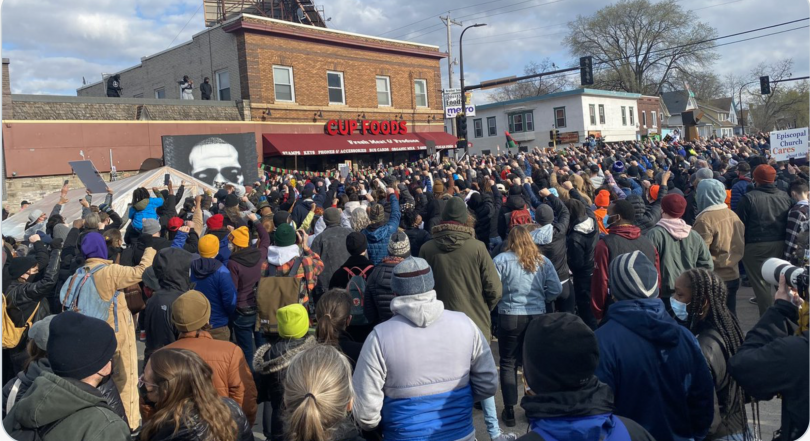 There is no one voice that can encompass the many meanings of the verdict handed down at the Hennepin County Courthouse on the afternoon of April 20, 2021.

With this in mind, we have gathered a collection of voices, each expressing a facet, a shard, a seed of the meaning of a Minneapolis jury finding Dereck Chauvin guilty of murdering George Floyd.

For the first time in Minnesota history, a white police officer has been held accountable for killing a Black man.

To be clear: Justice would be George Floyd living today. There is still work to do, but this accountability should give us all some hope.

Eunisses Hernandez, co-executive direct of La Defensa, a community-based org “dedicated to decarcerating the largest jail population in the US.”

Don’t get it confused, accountability is not justice. Justice is our Black community members not getting killed by cops. It means not getting criminalized or incarcerated for just living.

GUILTY ON ALL 3 COUNTS. #JUSTICEFORGEORGEFLOYD pic.twitter.com/sk3h83gSXW

Michael Tubbs, youngest mayor in the history of Stockton, CA., now a special adviser for economic mobility and opportunity for Governor Gavin Newsom

The verdict was the correct one. Still, George Floyd’s murder was caused by systemic issues and will happen again without real structural changes.

While I'm relieved by today's decision, I am also conscious of the fact that it is not enough.

We must continue fighting for African American dignity in this country.

True justice would be George Floyd getting to watch his daughter Gianna grow up. 1/4

My statement on the verdict in the Derek Chauvin trial: https://t.co/hpTz3qFJaD pic.twitter.com/rNT2zVljdr

1/2 Here's a reminder to never automatically believe what police tell you (as if we need reminding). Here's how the Minneapolis PD initially described their encounter with George Floyd: “He was ordered to step from his car. After he got out, he physically resisted officers…

History should remember the incredibly 17 year old Darnella Frazier who had the strength and composure to capture the murder of #georgefloyd on video. Without her video there may never have been #justice.

Reminder to all journalists…

This is how Minneapolis initially reported the death of #GeorgeFloyd pic.twitter.com/azjZUPecmH

Police kill around 1,000 people every year, but only seven officers have been convicted of murder in police shootings since 2005. At least 64 people, half of them people of color, have been killed by the police since the start of this trial. https://t.co/iAGlEBKAf4

The jury in the #DerekChauvinTrial delivered accountability, but the future of equality rests squarely in America’s hands.

Today's verdict is a critical step in the ongoing march towards restoring public trust in our criminal justice system. (1/3)#BLM #GeorgeFloyd

As we have all seen with the verdict in the Derek Chauvin case, we must have faith in the judicial process.  The law will take its course, and justice will prevail. If a crime is committed, regardless of who the perpetrator is, they will be brought to justice. pic.twitter.com/TEgrP4CbeP

My heart is with all of you who took to the streets – this is your victory.

Thinking of Darnella Frazier who filmed the death of George Floyd at 17 and quite literally changed the world. She testified there are nights she stays up “apologizing & apologizing to George Floyd for not doing more.” But, she did so, so much to get to this murder conviction.

Is this what it feels like to experience justice?
Asking for every poc in America. #justice https://t.co/DCg9zkapc6

Today thinking of my black sons and all the black sons, fathers, husbands, brothers, uncles cousins.
We love you.
May you live your full life #Blacklivesmatter pic.twitter.com/ggN8yp8004

“Black men have been treated through the course of history as less than human” – Vice President Kamala Harris speaking with candor at the White House. “We are all a part of George Floyd’s legacy” she said and now we must all do our part to honor him

LAPD has called a city wide tactical alert. We are asking @LAPDHQ to remain calm and peaceful after results they do not agree with.

We hope @MayorOfLA and @CD6Nury urge the police to not harass and brutalize Angelenos. https://t.co/s3Z3qsoMPV

The police & even prosecutors at the #DerekChauvinTrial are telling us that this was abt one bad apple, that the issue isn’t with policing itself. Nothing makes it clearer that this isn’t true than when a teenage girl asks for help but is murdered instead #JusticeForMakiyahBryant https://t.co/zwo8YPCK2L

The names to be said. This is a cemetery where names of people who have died at the hands of the police have been memorialized near George Floyd Square. There were 133 markers here, prior to Daunte Wright’s death. pic.twitter.com/dFPmHEp4Cz

The evidence of our eyes met at last by accountability in the eyes of justice. #DerekChauvinTrial

The presumption of guilt assigned to Black and brown people makes their victimization by police, prosecutors, judges, and prison officials tolerable to many people in this country. That did not change with today’s verdict, but it must change if this country is to make progress.

Cerise Castle, journalist, author of the investigative series, A Tradition of Violence: The History of Deputy Gangs in the Los Angeles Sheriff’s Department

I was detained today while covering a press conference hosted by the LA County Sheriff's Department. Yes, I had my press pass. https://t.co/GtTDA37Kuk

Editor’s note: The girl’s name is Ma’Khia, her mother says she was 16.