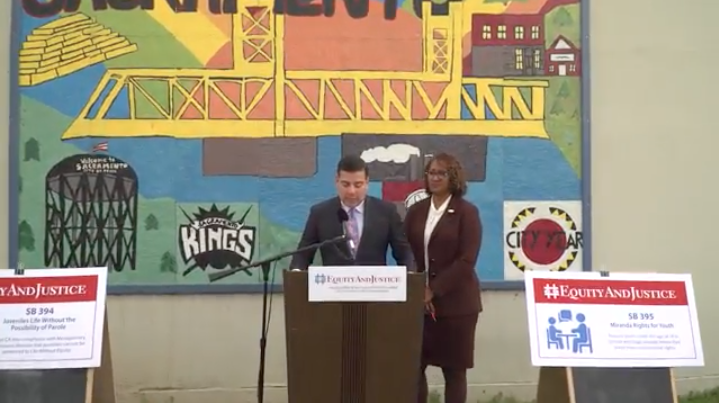 Of the bills that left Brown’s desk Wednesday, the governor rejected just one.

Among the bills in the Mitchell-Lara package, is SB 394, which will allow people who received life-without-parole sentences as juveniles to be eligible for a parole hearing at the end of 25 years. This bill will bring California into compliance with the 2016 US Supreme Court ruling that the 2012 Miller v. Alabama decision, which, declared mandatory LWOP sentences for juveniles to be unconstitutional, must be applied retroactively. (We wrote more about SB 394, and how it ended up on the governor’s desk: here.)

“The Equity and Justice laws Governor Brown signed take a greatly needed step toward restoring the value of rehabilitation in our justice system,” Lara said. “Science is clear, young people are different, and as such have the capacity to change and become productive members of society. These Equity and Justice laws will give them that opportunity.”

In recent months, a growing number of California counties have ended the practice of collecting outsized fees and fines from families of children involved in the juvenile justice system. (In April, Sacramento County abolished juvenile administrative fees. Most recently, Contra Costa County halted the practice. Los Angeles and Sacramento are also among the counties that not charge juvenile justice fees.)

Now, all local governments in California will be banned from extracting administrative fees for kids’ involvement in the juvenile justice system, thanks to the freshly signed SB 190.

Sens. Mitchell and Lara introduced the bill in response to a 2011 case involving a 10-year-old with developmental disabilities named Joseph who shot his abusive neo-Nazi father, Jeffrey Hall, in the head while he slept. The night before, Jeffrey Hall had threatened to burn their Riverside home down while his family was sleeping.

When a police detective asked Joseph if he understood his Miranda Rights, the boy answered, “Yes, that means I have the right to remain calm.” Joseph was permitted to waive his right to remain silent, and confessed to the murder. California’s Supreme Court denied a petition on behalf of Joseph to review the case, and later the US Supreme Court refused to take up the case.

“Sadly, too many poor kids and kids of color today are more likely to end up as victims of the juvenile justice system,” Mitchell said. “If one believes that our children will be tomorrow’s leaders then we must look through a child-development lens. These bills help provide the appropriate resources and policies to get them there.”

The governor also signed SB 312, which according to the bill’s author, Sen. Nancy Skinner (D-Berkeley), “creates a path for young people with a past offense to prove they deserve a second chance and clear their criminal records.” Specifically, the bill opens a path for people who committed crimes before their 17th birthday—and who have “demonstrated full rehabilitation” during a waiting period—to petition the courts to seal their juvenile records for certain offenses.

According to Skinner, SB 312 “modifies regulations that were enacted with the passage of Prop 21 in 2000 that banned the sealing of many juvenile offense records for crimes committed by minors between the ages of 14-17.” So, many juvenile offenders who lived for years without committing new crimes faced major barriers to employment, housing, and more.

Another bill, AB 529, by Assemblymember Mark Stone (D-Monterey Bay), will require the courts to automatically seal the juvenile records of kids who were considered wards of the court but had their petitions dismissed after an adjudication hearing.

And a bill from Toni Atkins (D-San Diego) will reestablish an “honorable discharge” program for juveniles who have successfully completed the terms of their supervision after they are released from the California Department of Juvenile Justice. SB 625 will reinstate a program that was “inadvertently lost” with the passage of AB 109 (Public Safety Realignment) in 2011.

While he did not object to the substance of the bill, Brown vetoed AB 811, which sought to make sure that kids in juvenile camps and in foster care get “reasonable” computer and internet access.

The governor, in his veto message, cited the $15 million price tag for infrastructure improvements as one of the reasons he rejected the bill. Vague language regarding the standard of reasonable access required could lead to implementation challenges. Brown encouraged lawmakers to revisit and revise the bill in the future. “In the meantime, I am directing the Department of Juvenile Justice to present a plan in the coming year to provide computer and internet access as soon as is practicable, and that can be budgeted for accordingly,” Brown said.

Reducing the Use of Sentencing Enhancements

Also among the new laws that Governor Brown approved on Wednesday, were two bills addressing sentencing enhancements, which add time onto sentences beyond the base term, for things like prior convictions, using a firearm, shooting from a car, gang affiliation, and more.

These enhancements can turn a sentence of a few years into one of multiple decades, and disproportionately affect poor and minority people.

And SB 620, would loosen a currently mandatory sentence enhancement of 10 years (or more) for people who use guns in the commission of a felony. The bill, introduced by Senator Steven Bradford (D-Gardena) would give judges the power to decide whether to impose the enhancement.

The Possibility of Parole for Geriatric Prisoners

Governor Brown also signed AB 1448, which will grant the Board of Parole Hearings the ability to consider granting parole to elderly inmates who have served at least 25 years behind bars.

“This package of bills represents our continued commitment to reforming our criminal justice system in a way that ensures public safety while also reducing prison overcrowding and unnecessary burdens on public funds,” said the bill’s author, Assemblymember Shirley Weber (D-San Diego). “AB 1448 strikes this balance by providing an opportunity for the release of some elderly non-violent inmates, but at the same time also requires that they clearly demonstrate in a court of law that they are rehabilitated and no longer pose a threat to public safety.”

In his signing message, Brown praised the bill and urged lawmakers to revisit the issue in future years in order to broaden eligibility for elderly release.

“I am signing Assembly Bill 1448 to ensure that the bulk of the elderly parole program currently administered by the Board of Parole Hearings under court order will continue after court oversight of our prisons is lifted,” Brown said. “This has been a successful program that saves the state a significant amount of money that would otherwise be spent caring for geriatric prisoners who no longer pose a risk to public safety.”

This year, a bill from Assemblymember Stone will further increase eligibility to people who committed crimes when they were 25 or younger, sentenced to long prison terms, and served at least 15, 20, or 25 years in prison, depending on the nature of the crime. AB 1308 does not guarantee parole, it just gives youthful offenders a chance to go before the parole board for consideration.

“People in prison are much more likely to enroll in school, drop out of a gang, or participate in positive programs if they can sit before a parole board,” Stone said. “This new law gives some offenders that chance. The measure will help people rehabilitate and reintegrate into the community, and it will take another step towards reducing recidivism.”

Another bill from Lara and Mitchell, SB 393, will seal records and get rid of barriers to employment for people who are arrested but never convicted of a crime.

In response to California’s newly signed SB 54 protections, ICE Acting Director Thomas Homan threatened to “conduct at-large arrests in local neighborhoods and at work sites, which will inevitably result in additional collateral arrests, instead of focusing on arrests at jails and prisons where transfers are safer for ICE officers and the community.

Brown also signed SB 384, a bill from Sen. Scott Wiener (D-San Francisco), that will create a tiered sex offender registry based on the seriousness of a person’s offense and their risk of reoffending.

The bill will break the current registry into three separate tiers. The first tier will hold people convicted of misdemeanors and/or non-violent sex crimes. People in the first tier will remain on the registry for 10 years. Individuals convicted of serious and/or violent sex crimes will be placed in tier two and will be registered for 20 years. The final tier will be reserved for violent sex predators and chronic sex offenders, who will remain on the registry for life.

Additionally, eligible tier three individuals would have the power to petition the court to be removed from the registry after 20 years.

In California, the only state with a lifetime registry in place, there are more than 100,000 people publicly registered as sex offenders. Law enforcement union leaders, including Michele Hanisee, the president of the Association of Association of Deputy District Attorneys (ADDA), praised the bill as a way to better monitor high-risk offenders while eliminating the “devastating impact” that the “woefully inflexible” lifetime registration has on people convicted of low-level sex crimes.