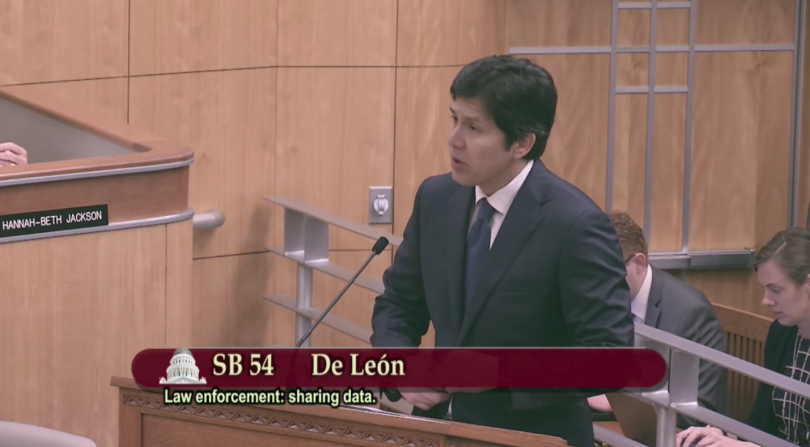 The bill would not stop law enforcement officers from complying with warrants to transfer immigrants who have committed violent crimes into federal custody.

During the first half of the year, the bill underwent a number of amendments, some of which were put in place to address concerns from police that the bill would prevent officers from participating in federal task forces. Thanks to those amendments, SB 54 garnered the support of law enforcement officials, including Los Angeles Police Chief Charlie Beck, Sacramento Police Captain James Beezley, and Santa Cruz County Sheriff Jim Hart.

But Governor Brown still had concerns about the bill before yesterday’s changes. On NBC’s Meet the Press, Brown said he supported the need “to block, not collaborate with, the abuse of federal power,” but said “some changes” needed to be made to the bill before he would support (and therefore sign) the bill.

Originally, the bill only allowed police to hold people for ICE who were previously convicted of or currently incarcerated for violent or serious felony offenses.

The new version of SB 54 allows local law enforcement to decide to hold a person already in custody for ICE if the individual has been convicted of one of a long list of felony offenses, or a misdemeanor “wobbler” that could have also qualified as a felony offense. In California, wobblers include spousal battery, DUIs, certain sex crimes, and often fraud offenses.

The changes will also allow immigration agents to interview people in local jails–a practice that was banned in the previous version of the bill.

The bill still bars local officers from asking people about their immigration status, detaining a person solely based on a hold request, or making or participating in arrests based on civil immigration warrants.

Under SB 54, law enforcement agencies would also not be able to contract with the feds with the purpose of housing individuals as immigration detainees in local jails.

Additionally, the bill was amended to increase the frequency of which local agencies reported data to the California Department of Justice. The bill will require local law enforcement agencies to send annual reports to the CA Justice Department regarding each agency’s transfer of people to immigration authorities. Agencies will also be required to report on the nature of the federal-local joint task forces in which they participated.

According to de León, SB 54 will still “provide landmark protections for our undocumented community and prevents our state and local law enforcement resources from being diverted to tear families apart” in the name of “the Trump administration’s radical and hateful immigration policy agenda.”

The bill will also make sure that “state and local police are not diverted from protecting our communities in order to enforce federal immigration laws,” de León said. “The protections provided by SB 54 will also ensure undocumented residents can report crimes and assist in prosecutions without fear of deportation.”

Governor Brown, now satisfied with the terms of the bill, agreed.

“This bill protects public safety and people who come to California to work hard and make this state a better place,” the governor said.