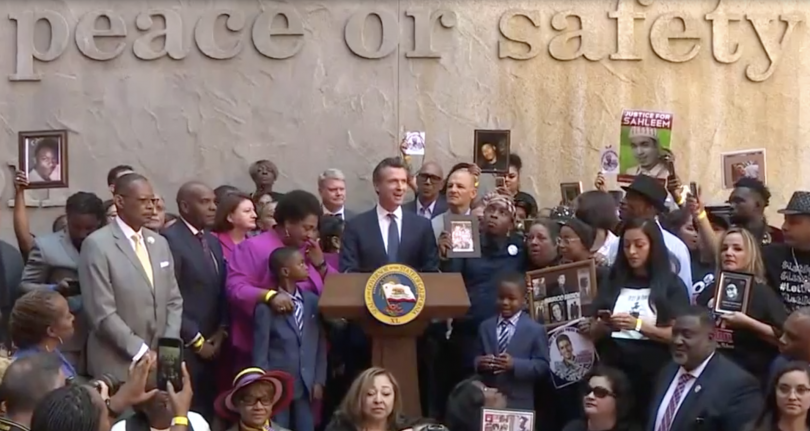 On Monday, California Governor Gavin Newsom signed AB 392, a bill by Assemblymembers Shirley Weber (D-San Diego) and Kevin McCarty (D-Sacramento) intended to narrow the circumstances under which law enforcement officers can legally use deadly force. According to lawmakers and advocates, AB 392’s passage will give California one of the strongest police use-of-force laws in the nation.

Assm. Weber originally introduced a version of the bill last year, in response to the death of Stephon Clark, who was fatally shot on March 18, 2018, by Sacramento police officers who believed the cell phone he was holding was a gun.

Gov. Newsom signed AB 392 on Monday morning, while standing alongside state lawmakers and family members of people killed during interactions with law enforcement.

While Weber said the bill “will not bring back those that we have lost,” she called the newly signed legislation, which goes into effect on January 1, an important step toward reducing deadly encounters between law enforcement and civilians in the future, and a move that will “change the culture of policing in California.”

AB 392 will require law enforcement officers to use deadly force only when “necessary to defend against an imminent threat of death or serious bodily injury to the officer or to another person.” (Note: the term “deadly force” is defined as any police use of force–via firearm or otherwise–that carries a substantial risk of killing or seriously injuring a person.)

The “reasonable” term is a murky standard that has offered “cover to police shootings that could have been avoided,” according to the ACLU of Northern California.

Back in May, lawmakers agreed to significant changes to the bill, through which law enforcement unions agreed to drop their opposition.

Originally, AB 392 defined “necessary” to mean “no reasonable alternative to the use of deadly force,” but the definition was lost in the wave of amendments.

The amended AB 392 also lost the original version’s requirement that officers try to de-escalate a tense situation–through “sound tactics, including the use of time, distance, communications, tactical repositioning, and available resources–before shooting.

The bill “specifies that a peace officer who makes or attempts to make an arrest need not retreat or desist from their efforts by reason of the resistance or threatened resistance of the person being arrested,” according to the bill’s Senate floor analysis. “A peace officer shall not be deemed an aggressor or lose the right to self-defense by the use of objectively reasonable force, otherwise in compliance with the provisions of this bill to effect the arrest or to prevent escape or to overcome resistance.”

At the same time, according to the legislators’ analysis, “the authority to use physical force, conferred on peace officers by this section, is a serious responsibility that shall be exercised judiciously and with respect for human rights and dignity and for the sanctity of every human life.”

Each person “has a right to be free from excessive use of force by officers acting under color of law,” the legislators wrote.

And under AB 392, courts deciding whether a deadly use of force was legal will be required to consider officers’ actions leading up to the force. California will be the only state to combine this requirement with the “necessary” standard, the ACLU of Nothern California noted, calling the bill’s passage “an extraordinary, precedent-setting victory that is long overdue.”

While AB 392’s proponents say that the new law will still make a crucial difference, some former bill backers, including Black Lives Matter, say all those amendments resulted in a final product that is too watered down to be “meaningful.”

The group has also criticized a law enforcement-backed bill, SB 230, molded to be a companion bill to AB 392, which would require police agencies to develop and maintain a minimum standard on use of force, and would commission standardized use-of-force and de-escalation training. BLM criticized the “increased budget allocation for law enforcement” that SB 230 would require. In a joint statement, the California Police Chiefs Association (CPCA), the California Association of Highway Patrols (CAHP), and the Peace Officers Research Association of California (PORAC) said the second half of the two-bill “legislative package” was critical to the success of the other. “While AB 392 proves an update to the legal standard for when force can be used in our communities, SB 230 proves the tools and training needed to effectively minimize the use of force and deliver better outcomes in alignment with the AB 392 standard.”

DeWitt Lacy, a civil rights lawyer in Los Angeles who has represented civilians in major police misconduct and wrongful death cases, told WitnessLA that he is concerned that with the passage of AB 392, “the response from law enforcement will be more of a masking agent than real reform — that now they will train officers to say it was necessary to shoot a person regardless of the circumstances.”

In the past, Lacy said, law enforcement agencies have “just changed the rhetoric around their training or their written policies.” In these cases, he said, “civil rights violations continued without pause.” This is even more of a risk in light of recent CA Supreme Court rulings that “make it the plaintiff’s responsibility to show that the officer willingly and intentionally violated someone’s specific civil rights,” said Lacy. “It’s not enough to show that an officer acted recklessly and without regard for a citizen’s safety. The legislature needs to do more to change this.”

In the meantime, lawmakers and the governor have taken a concrete and “necessary step” toward “protecting” and “affirming the sanctity of human life,” by approving AB 392, according to Assm. Weber. “The inaction of those who have the power to enact change” has resulted in “far too many deaths” during police encounters.

“We realized that we had to do something,” said Weber. “It was not enough for people to be marching in the streets, and taking their hearts and their tears away, and for families to be caught in a circle of pain, and us to do nothing.”

“This bill broke records in terms of coming out of the house,” Weber said. “Eighty-five percent in the Assembly, 85 percent in the Senate. We had prayed for 51 [percent].”

Weber and McCarty’s legislation has also served as the inspiration for a federal bill from two U.S. Senators representing Ferguson, MO (where a police officer killed Michael Brown in 2014) that would tighten the national deadly force standard, Rolling Stone reported.

“As California goes, so goes the rest of America,” Newsom said. Signing AB 392 “stretches the boundaries of possibility,” and “sends a message to people all across this country.”

“I’m ready to sign this damn thing,” said the governor.

Among those who were likely far more ready for Newsom to put his signing pen to work, was Kori McCoy.

McCoy told the story of his brother, 20-year-old Willie McCoy, who fell asleep in a Taco Bell drive-through with a gun in his lap in February. Six Vallejo police officers shot 55 rounds at the young man in 3.5 seconds, after startling him awake. Officers say that as the young man woke up, he reached a hand toward his gun, apparently with the intention of shooting at the officers.

Kori McCoy described his brother as “resilient and selfless,” — a “caring young man with an old soul.” Willie’s caring and giving spirit, and his “ability to rise above diversity,” is part of “why his death hurts so much,” Kori said. “When my family and I saw a bystander’s cell phone video and the police officer’s body camera footage, we saw the execution of someone who had his whole life ahead of him.”

“Willie McCoy is now part of an ever-growing list of black and brown men unjustly and needlessly killed by police officers in America,” said Kori McCoy. And, indeed, police use of force is one of the top causes of death for black men and boys, according to a new report from Rutgers University. Approximately 1 in 1,000 black males in the U.S. is killed by police, the report said. In contrast, the odds for all males to die at the hands of law enforcement are 1 in 2,000.

An independent use-of-force expert found that the McCoy shooting was “reasonable” and “in line with contemporary training and police practices associated with use of deadly force,” the Vallejo Times-Herald reported. In response to the report, Vallejo City Attorney Claudia Quintana stressed that “it is important to recognize that there is a distinction between what use of force is defensible from a civil liability perspective and what overall outcome is desirable from an organizational and community perspective.”

Reducing those undesirable shootings must come alongside a culture shift, said Newsom. Noting that training, accountability, and transparency are important puzzle pieces, those things, and the bill itself, do not complete the formula for change. “It’s one thing to sign a piece of paper, to sign legislation, it’s another to change hearts and minds, to change culture,” Newsom said. “That’s the work that is in front of us — the work that we as a community need to manifest at peril of … missing the point of this moment.”