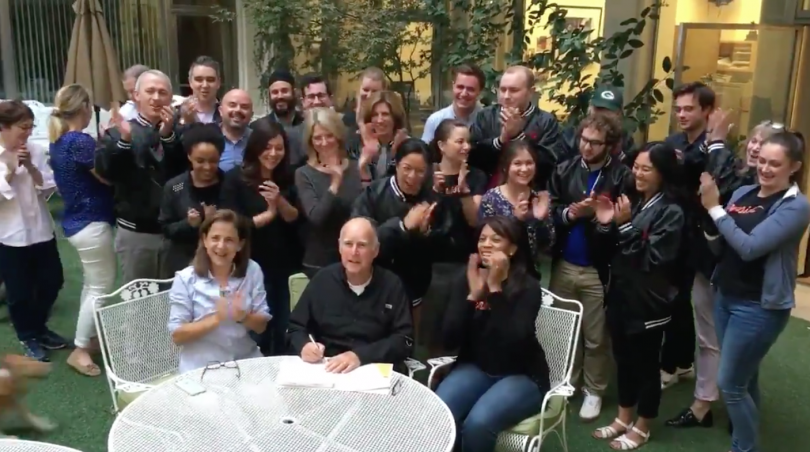 Over the weekend, Governor Brown took his signing (and vetoing) pen to the last chunk of more than 1,000 bills that passed over his desk in the final year of his fourth term as California’s governor.

Many of the bills in the last batch were criminal justice-related. We have featured some of these bills in other stories this week. Most of the others we’ve compiled in the non-exhaustive list below:

Current California law requires courts to tack a 5-year sentencing enhancement onto a person’s base sentence for a prior serious felony conviction when that person is convicted of a new serious felony.

SB 1393, approved by Gov. Brown over the weekend, will give courts discretion to strike that 5-year sentencing enhancement.

“Nearly every sentence enhancement in California can be dismissed at the time of sentencing if the judge finds that doing so would serve the interest of justice,” said bill author Senator Holly Mitchell (D-Los Angeles). “However, under existing law people with current and prior serious felony convictions receive a mandatory five-year enhancement. As a result, judges lack the discretion to tailor these sentences based on the facts of the case, the defendant’s history and culpability or other potential mitigating factors.” This lack of discretion, has slammed thousands of Californians with mandatory additional prison terms, according to Sen. Mitchell. “This rigid and arbitrary system has meted out punishments that are disproportionate to the offense, which does not serve the interests of justice, public safety, or communities,” Mitchell added.

Brown vetoed a separate enhancement-related bill. The bill, AB 1511, would have re-upped a set of sentencing enhancements that sunset on January 1, 2018.

“I see no reason to now permanently re-enact a repealed sentencing enhancement without corresponding evidence that it was effective in deterring crime,” the governor said in his veto message. “As I have said before, California has over 5,000 criminal provisions covering almost every conceivable form of human misbehavior. We can effectively manage our criminal justice system without 5,001.”

AB 1793, by Assemblymember Rob Bonta (D-Alameda), will facilitate the automatic reclassification or expungement of past marijuana-related convictions from the records of Californians eligible for relief under Proposition 64 (which legalized recreational marijuana), rather than require them to submit petitions for the changes to occur.

There are reportedly approximately 220,000 marijuana cases eligible for expungement or reclassification in California.

“The majority of eligible individuals have not gone through the process of petitioning the courts,” said Bonta. “Many people are unaware of this opportunity to change their records, but even for those who know their rights, navigating the legal system’s bureaucracies can be confusing, costly and time-consuming.”

Eyewitness misidentification is one of the most common factors contributing to wrongful convictions.

SB 923 establishes five important state standards that, the lawmakers hope, will reduce the likelihood of misidentifications in criminal cases. The bill calls for blind lineups, where the officer who gives the lineup to the witness does not know the suspect’s identity. If a blind lineup isn’t “practical” then the officer should use a “blinded technique” by placing the suspect and each of the filler photos in separate folders and shuffling them before handing them to the witness one at a time.

Eyewitnesses should also be informed that the perpetrator of the crime may or may not be in the lineup, according to the proposed standards.

Then, after identifying someone from the lineup, the witness should be required to write a personal statement explaining how confident they are in their ID.

Finally, SB 923 says that the full lineup procedure should be recorded on video.

“Our justice system should be based on best practices that allow our law enforcement officials to do their jobs and the public to have the confidence that we are keeping our communities safe,” said Senator Scott Wiener. “Our current lack of eyewitness standards can lead to wrongful convictions and the actual perpetrator of the crime remaining free. Some California counties already employ best practices that work. SB 923 ensures that, throughout California, our justice system protects innocent people, apprehends those who commit crimes, and allows public safety officials to do their jobs.”

Under current law, a person must continue to register as a sex offender, even after exoneration. One governor-approved bill, SB 1050 would relieve sex crime exonerees from that requirement. The bill, by Senator Ricardo Lara (D-Bell Gardens), would also boost assistance and services for newly released exonerees to ease their transition back into their communities.

A third bill, AB 2988 requires the courts to keep court exhibits that contain biological material (rather than just the biological material itself) for the length of a person’s incarceration “so that evidence remains available for post-conviction testing.” Government agencies that have evidence that was not introduced in court will also have to keep the evidence for post-conviction testing.

“Current law…fails to take into account technological advancements in forensic science,” said the bill’s author, Assemblymember Shirley Weber (D-San Diego). “We can now test evidence that yields a forensic result that could not have been obtained at the time of the conviction, substantiating the need for lengthier preservation.”

As they stand, California’s laws on the issue “no longer adequately serve justice as they favor the destruction of evidence after the first appeal, ignoring the fact that post-appellate scrutiny of convictions requires access to physical evidence in order to uncover potentially wrongful convictions and to validate others,” Weber added.

Dignity for the Incarcerated

In California, people in prison must have $1.00 or less in their “inmate trust accounts” for at least 30 days before they can be declared indigent, allowing them to access court resources (paper and notary services, for example) as well as medical, mental, and dental health care without having to pay a $5 copayment. Indigent inmates can also receive free hygiene products upon request.

This restrictively low indigence threshold prevents poor inmates from accessing the courts, threatens the health and safety of inmates and correctional staff, adds to the challenge of reintegration, and further burdens families, who are often primarily responsible for covering conviction-related costs,” according to Assemblymember Mark Stone (D-Monterey Bay). “When an inmate is discouraged from seeking medical care because they can’t afford the copayment, or is discouraged from accessing hygiene items because of the stigma around requesting them, the entire correctional facility is endangered by the further spreading of communicable diseases like hepatitis C to staff and other inmates.

Stone’s AB 2533 will raise the threshold for inmate indigence to $25 or less. The bill also requires prisons to automatically provide indigent inmates with basic hygiene products.

AB 2138, a bill by Assemblymember David Chiu (D-San Francisco), aims to erase one of those blockades keeping the formerly incarceted from accessing employment. The bill will prohibit the California Department of Consumer Affairs from denying professional licenses to people based solely on prior non-violent convictions.

“If the State of California is truly committed to rehabilitation, then we need to walk the walk,” said Chiu. “It is unacceptable for us to provide job-specific training while people are incarcerated and then put up nonsensical roadblocks to becoming employed in those very same professions upon re-entry.”

The law will also be amended to require courts to hold a hearing, upon request, to consider whether a defendant seeking diversion should owe restitution to a victim.

In California kids in grades 4-12 can be suspended for “willful defiance”–a harmful catchall term for most anything that can pass as disruptive behavior, and is used disproportionately on students of color and students with disabilities.

“Kicking students out of school does nothing to address underlying problems and ultimately makes it more likely they will drop out,” said Senator Nancy Skinner (D-Berkeley), who introduced the bill. “SB 607 puts the needs of kids first.”

Governor Brown said that school discipline should largely be left up to educators, however.

“Teachers and principals are on the front lines educating our children and are in the best position to make decisions about order and discipline in the classroom,” Governor Brown said in his veto message. “I just approved $15 million in the 2018 Budget Act to help local schools improve their disciplinary practices. Let’s give educators a chance to invest that money wisely before issuing any further directoves from the state.”

Brown did sign a different school discipline bill, however. Assemblymember Shirley Weber’s AB 2657 will prohibit the use of restraints or isolation on any kid in school unless a child’s behavior is posing “a clear and present danger of serious physical harm” to self or others.

The bill also requires school districts to collect data on the instances in which students are restrained or secluded.

“Current law does not provide guidance on types of restraints or the use of seclusion,” said Assm. Weber. “Underreporting is potentially very high, and only comes to light after a complaint is made, followed by an investigation. For example, in one case a single complaint on behalf of ‘Jane Doe’ led to an investigation that showed the district was out of compliance with respect to thirteen additional students. Jane Doe was restrained 43 times in about a month, and 25 of those incidents involved predictable behavior.”

Because police departments are not required by law to track rape kit numbers, there’s no estimate of how many California rape kits are sitting in labs untested (and why they remain untested). The non-profit End the Backlog, gives an incomplete estimate for the state of more than 13,000 kits.

Governor Brown took a step toward remedying the problem, by signing AB 3118, a bill to require law enforcement agencies, crime labs, and medical facilities to conduct audits of all the untested kits in their possession. The agencies and facilities must then report the data to the U.S. Department of Justice.

“Sexual assault survivors deserve justice, and a rape kit sitting on a shelf collecting dust is not justice,” noted Assemblymember Chiu. “To truly address the backlog, we need to know how many untested kits exist in California, and we must test all kits moving forward to ensure we do not increase that backlog.”

While the governor approved of the move to more accurately tally the state’s towering rape kit backlog, Brown vetoed a bill that would have required police and crime labs to promptly test all rape kit evidence.

“After having been raped and then undergoing an invasive rape kit exam, it’s unconscionable that a victim would be led to believe that their rape kit would be tested promptly and then have that kit sit for months or years on a shelf,” said Sen. Connie Leyva, the bill’s author. Leyva said she was “angry and disappointed” by Brown’s veto. “Just as the Legislature approved the bill unanimously, I have spoken to many rape survivors, survivor advocates, law enforcement leaders, and residents across our state who firmly agree that we must require the swift testing of all new rape kits.”

In his veto message, Brown said that he “fully supported the goal” of SB 1449, but that the state should hold off on creating a mandatory timeline for testing until the audit Sen. Chiu’s bill required was completed. The governor also said that he wanted to give the state Department of Justice time to reduce the backlog with the one-time infusion for rape kit testing included in the latest budget. “I would like to allow time for this year’s legislative actions to take effect so we can gauge the appropriate next steps and budget accordingly,” Brown said.

This story has been updated to include additional bills.