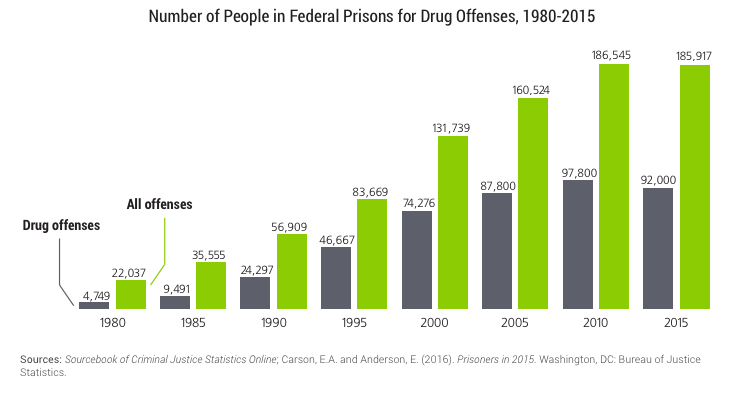 A newly updated fact sheet from the Sentencing Project features some national prison trends over the last 30 years that are worth examining as US Attorney General Jeff Sessions and President Donald Trump work to move the nation back toward “tough on crime” policies that the previous administration abandoned.

When the nation’s 44,311 “virtual life” sentences are included, the total population of life sentences hits 206,268—or one out of every seven prisoners.

California doles out the largest number of life sentences of all the states. In 2016, there were nearly 39,700 lifers in CA prisons, compared with approximately 13,000 in Florida and 9,500 in New York.

State legislators are working to reduce the use of unnecessarily lengthy sentences, however. One bill in California, SB 620, would loosen a currently mandatory sentence enhancement of 10 years (or more) for people who use guns in the commission of a felony. The bill, introduced by CA Senator Steven Bradford (D-Gardena) would give judges the power to consider mitigating circumstances, and decide whether to impose the enhancement.

The fact sheet also takes a look at enduring racial disparities in the criminal justice system.

People of color make up more than 60% of today’s prison population. During fiscal year 2013-2014, black people made up 35.4% of the prison population, while white people accounted for 33.8%, and Latinos made up 21.6%. The numbers are startling, particularly with regard to the population of black inmates, considering African Americans account for just 13.2% of the nation’s population.

The fact sheet also features statistics on incarceration rates for people convicted of drug crimes. Over a period of 35 years, the number of people locked up for drug crimes has shot up from 40,900 in 1980 to 469,545 in 2015. Mandatory minimums and other harsh sentencing laws also led to drug offenders spending more time behind bars. Back in 1986, people spent an average of 22 months in prison for federal drug offenses. In 2004, federal drug offenses landed people behind bars for an average of 62 months.

While progress has been made in states like California and Texas to reduce overall prison populations through criminal justice reforms (like CA’s prison realignment), the data shows there are still miles to go toward reducing disparities and the nation’s costly reliance on incarceration.

It’s particularly important to focus on facts and data as the Trump Administration pushes through initiatives that breathe new life into the laws and policies that emerged during the discredited “war on drugs,” and unravel the efforts of the bipartisan “smart on crime” movement.

In a memorandum sent out last month, US Attorney General Jeff Sessions directed federal prosecutors to seek the most serious charges possible (including mandatory minimum sentences) for drug offenders.

In an op-ed for the Washington Post, Sessions argues that seeking these harsher punishments will counteract increasing crime rates across the nation, which Sessions attributes to the Justice Department having “softened its approach to drug offenders.”

In their own WaPo op-ed, Marc Mauer, the executive director of the Sentencing Project, and David Cole, the ACLU’s national legal director, point out some of the glaring flaws with Sessions’ plan, including the fact that federal prosecutors handle under 10% of all criminal cases nationally, “so a modest change in their charging policy with respect to a subset of drug cases is unlikely to have a nationwide impact on crime.“

Furthermore, the people who did benefit from Holder’s policy reform did not have a “sustained history of crime or violence or any connections to major drug traffickers.”

Instead of reinvigorating the war on drugs, the AG “would be smarter to examine local conditions that influence crime and violence, including policing strategies, availability of guns, community engagement and concentrated poverty.”