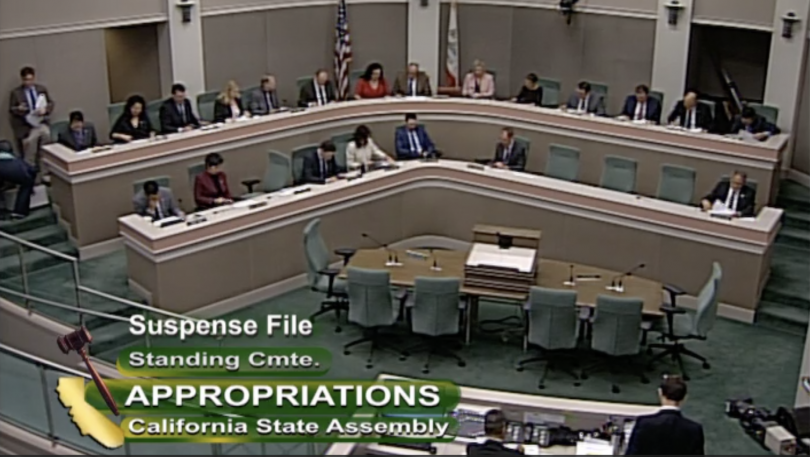 Late last week, the California Assembly and Senate’s fiscal committees decided the fate of more than 1,000 bills packed into their “suspense files.”

These suspense files act as holding pens for bills that would have an annual financial impact of more than $150,000 for the state.

Although there are some exceptions to the rule, the Senate and Assembly’s Appropriations Committees generally send $150,000-plus bills into their suspense file to be acted upon by a mid-May deadline. Once that deadline hits, the committees hold high-speed mass-hearings, during which bills will either clear the key hurdle or quietly meet their end–at least for this year. (The file has become a place where lawmakers can kill bills they don’t like without attracting much attention, and without having to actually vote them down.)

While this is by no means an exhaustive list, here are a few of the noteworthy criminal justice bills that will now move on to their respective house floors for a vote, and some of the bills that will remain locked away, this year.

Bills That Survived the Suspense

Among the bills that now move on to the next stage of the legislative process, is AB 1076, a bill to automate the expungement process statewide.

Data suggest that approximately two million people are eligible to have old arrests and certain crimes removed from their records. Yet the complicated petition process keeps most from clearing their criminal histories.

AB 1076, by Assemblymember Phil Ting (D-San Francisco)–in partnership with SF District Attorney George Gascón–would automatically complete expungement and resentencing processes for people convicted of eligible low-level offenses (not violent crimes and sex offenses), as well as people with arrests that never resulted in criminal convictions, as long as the statute of limitations has passed. (Read more about the bill: here.)

San Francisco District Attorney George Gascón and Assemblymember Rob Bonta introduced the bill, called The Criminal Justice Data Improvement Act, in response to an April report from Measures for Justice and the Stanford Criminal Justice Center. The report shed light on how difficult it is—even for researchers, let alone the public—to access criminal justice data in California. The report also highlighted glaring gaps in the state’s criminal justice data that “limit the ability of researchers, policymakers and the public to assess criminal justice policies, especially critical during the current period of reform.” These missing pieces in the data picture are not only a “threat to public safety,” but “also a threat to good governance,” said DA Gascón.

Another safe-for-now bill from Sen. Mitchell, SB 555, aims to reduce commissary prices and phone call costs for jailed people and their family members, who often bear the financial burden of communicating with locked up loved ones.

AB 701, authored by Assemblymember Shirley Weber (D-Los Angeles), would boost what an exonerated person receives upon exit from prison–from $1,000 to $1,000 plus an additional $5,000 for housing. The freed innocent person would also be entitled to reimbursement for housing costs for the next one to four years.

A bill from Assemblymember Mark Stone (D-Monterey Bay), AB 45, would do away with a $5 copay for medical visits in state prisons, which can discourage incarcerated Californians from seeking the medical care they need for chronic or contagious illnesses. (WLA wrote about AB 45: here.)

AB 1182, by Assemblymember Wendy Carrillo (D-Los Angeles), would have reduced parole time for people convicted of certain crimes who had been deemed by the state to be low or moderate-risk.

Research has shown that a person who remains free of parole violations and does not re-offend during their first 180 days of supervision is far more likely to successfully reenter their community.

AB 1182 would have dropped the parole-service requirement from either to two or three years to either one or two years.

While California technically allows for earned early release from parole, the tool is used too infrequently, according to the Californians for Safety and Justice, which sponsored AB 1182. Approximately 49,000 people are on parole in the state.

“There are 43,0387 people in the [Post Community Release Supervision] PRCS population in our state which continues to remain steady despite a portion scoring low or moderate on their risk assessments,” Californians for Safety and Justice says. “Unfortunately, too often in current practice, the decision to discharge a parolee is based on completing the full parole term dictated by the offense, not on evidence-based practices and an objective measure of the public safety risk the individual represents.”

“Compliance and crime-free behavior in the initial 180 days of supervision should be incentivized and, unless there are objectively verifiable reasons that can be linked to criminal intent, people should be discharged,” wrote Tom Hoffman, former deputy chief and interim chief of the West Sacramento Police Department and the retired director of the CDCR’s Department of Adult Parole Operations, in an op-ed for the Sacramento Bee. “Simply stated, parole supervision should only be maintained for as long as it needs to be, not for as long as it can be.”

Not everyone agreed with Hoffman, of course.

The LA County Association of Deputy District Attorneys’ president, Michele Hanisee, said the bill would have had a severely negative impact on communities, and called it “the latest assault on public safety,” before the bill was killed in Appropriations.

Leave a Reply to Superduty X