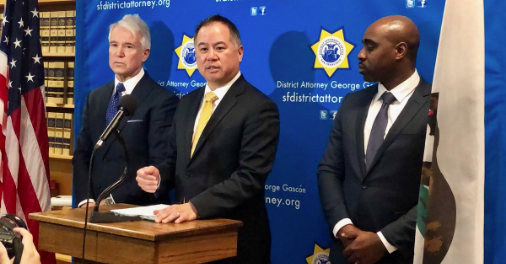 Approximately two million Californians are eligible to have old arrests and certain crimes cleared from their records under state law, according to San Francisco District Attorney George Gascón.

Yet, most never successfully clear their records—because of the complicated petition process and associated fees, and because many are unaware that they are eligible for such relief. Fewer than one-out-of-five people successfully complete the process.

“Millions of Californians are living in a paper prison,” said District Attorney George Gascón. “A huge number of people are entitled to relief that they’ll never realize because they have to jump through hoops to get it.”

On Thursday, DA Gascón and CA Assemblymember Phil Ting (D-San Francisco) announced the arrival of AB 1076, a new bill that would automatically complete expungement and resentencing processes for people convicted of eligible low-level offenses (not violent crimes and sex offenses), as well as people with arrests that never resulted in criminal convictions, as long as the statute of limitations has passed. The bill would also clear eligible convictions for people who served time in local jails or on probation, as long as they remain crime-free afterward.

Last month, Gascón announced that his office, with help from an algorithm created by Code for America, had identified and cleared more than 9,300 marijuana-related convictions eligible for either expungement or resentencing under voter-approved Proposition 64, which legalized recreational marijuana.

While Gascón is not the only proactive DA working to automatically clear convictions under Prop. 64, many local district attorneys, including LA County District Attorney Jackie Lacey have resisted taking on the task of automatically clearing marijuana convictions, leaving it up to the standard petition system.

Starting in 2021, AB 1076 would require the California Department of Justice to regularly examine the state’s criminal history database to identify individuals who are eligible to have their records cleaned.

“With a few key strokes California can enhance public safety and equity while reducing recidivism and taxpayer spending,” Gascón said. “AB 1076 will not only modernize our system of justice, it’s a model for the justice system.”

The proposed changes would be cheaper, too. While it costs approximately $3,800 to clear each record under the current system, it would cost an automated system approximately four cents to wipe a conviction.

Those cleared convictions and arrests would still be visible to law enforcement, but not to landlords, colleges, and employers. According to Assemblymember Ting’s office, approximately 90 percent of employers, 80 percent of landlords, and 60 percent of colleges run criminal background checks on applicants.

In one survey from Californians for Safety and Justice, 76 percent of respondents said that their past convictions negatively impacted their ability to find stable housing and employment, pay fines and fees, and obtain an occupational certification.

“Everybody deserves a second chance,” Ting said. “There is a great cost to our economy and society when we shut out job-seeking workers looking for a better future.”