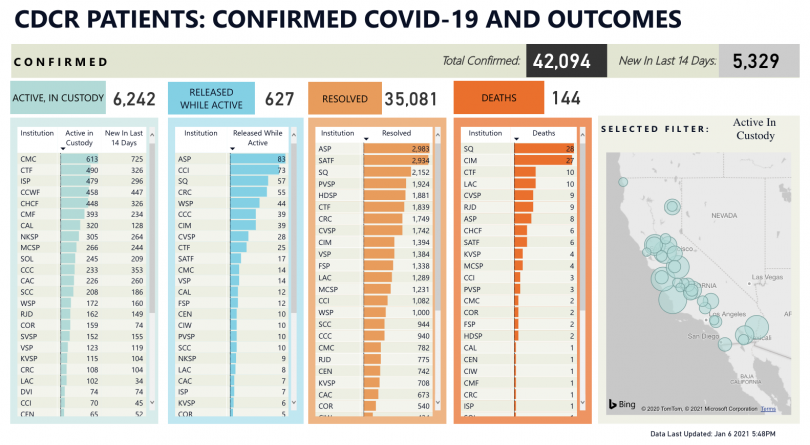 At least 19 people died between December 30 and January 6, after contracting the coronavirus while locked in California prisons, according to data from the CA Department of Corrections and Rehabilitation. In total, there have been 144 recorded COVID-19 deaths among the incarcerated population, and 11 deaths among prison staff.

Since March, 42,094 incarcerated people and at least 13,284 prison workers have tested positive.

In mid-October, the number of people in custody with active coronavirus cases had dropped below 500. That number surged to more than 10,000 active cases in the days just before Christmas, with more than half of the state’s 35 prisons experiencing outbreaks of more than 200 cases.

While the system-wide active infection number has now dropped to 6,242 for the prison population, a number of prisons are experiencing new or second-wave outbreaks. At the same time, prison health workers are beginning to administer the first wave of vaccinations to staff and high-risk imprisoned individuals.

One of those first prisons to begin receiving vaccine doses, the Central California Women’s Facility (CCWF), was hit with a new wave of infections as the first vaccines rolled in.

On Tuesday, January 5, CCWF had 518 active cases in a population of a little over 2,000. (That number dropped to 452 the next day, on January 6, as the number of cases “resolved” outpaced new infections recorded.)

The same Tuesday, the California Coalition for Women Prisoners issued a call for action to protect those inside CCWF, where the advocacy group said residents lacked supplies necessary to clean and sanitize quarantine units, despite being 10 months into the pandemic. Additionally, the group accused prison officials of leaving people who test positive for the virus in “crowded cells that house up to eight people,” sometimes “for hours on end” before moving them to quarantine.

So far, CCWF has received and administered a vaccine first dose for staff and the vulnerable patients inside the prison’s skilled nursing unit.

California is one of a few states that has included imprisoned people among the high-priority groups for the first phase of the vaccine roll-out.

California Men’s Colony in San Luis Obispo is also experiencing a new surge in cases. On January 5, there were 720 cases, all but one of which were new infections uncovered in the last fourteen days. (That number dropped to 613 active cases by the next evening.)

Over the summer, the prison had an outbreak that reached more than 600 (now resolved) cases. Other prisons are also experiencing fresh outbreaks. Besides CCWF and CMC, ten other lockups have recorded more than 200 new cases in the last 14 days.

Ten facilities have had more than 1,500 infections among imprisoned people since testing began. Avenal State Prison and the Substance Abuse Treatment Facility in Corcoran have had 3,088 and 2,996 cases respectively, most of which are now categorized as “resolved.”

At the beginning of the pandemic, staff were not required to get tested for the virus, and were trusted to get tested in their communities if they felt ill or came into contact with someone who had coronavirus. They were also trusted to self-report any positive test results to the CDCR.

In July, the CDCR instituted regular mandatory testing for all staff.

On December 21, CDCR officials issued a memo notifying workers that anyone who refuses weekly testing without an established religious or medical exemption will be sent home without pay, and face “escalating discipline.”

The state has also reduced the prison population by around 20 percent (a drop of approximately 24,000 people) since the start of the coronavirus crisis, by limiting intake from jails combined with around 10,000 regular releases, as well as by early-releasing around 6,600 people who were already close to the end of their sentences to slow the spread of the virus in overcrowded prisons. Yet, early releases have slowed significantly. And as of December 22, there were more than 8,000 people sitting in jail waiting to be transferred to state prison once the transfer ban is lifted.

For now, it appears to be a race to get currently limited vaccine doses into staff and incarcerated Californians as the virus continues to cut short the lives of those inside on a nearly daily basis.