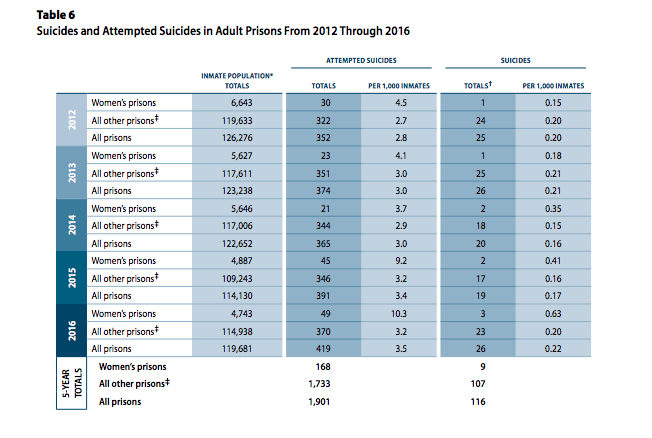 The California Department of Corrections and Rehabilitation (CDCR) has long struggled to prevent suicides in state prisons. A freshly signed bill aims to hold the state accountable by requiring CDCR to send annual suicide prevention reports to state Legislature.

More than two decades ago, in 1995, the U.S. District Court for the Eastern District of California found that CDCR was violating inmates constitutional rights by failing to provide adequate mental health care within its prisons. Since 1995, a Special Master has monitored the state’s efforts to remedy the problems listed in the federal court’s ruling. The state has struggled for years to fix those problems, including its substandard suicide prevention system.

Nowhere has this failure been more evident than at the California Institute for Women in San Bernardino County.

Between 2013 and 2016, the prison experienced an alarmingly high number of suicides (6), plus more than 70 suicide attempts, landing the facility the highest suicide rate among California’s 34 prisons, equivalent to five times the state average, and eight times the national average.

In April 2016, 35-year-old Erika Rocha, committed suicide in the mental health unit at CIW, just one day before a scheduled parole hearing.

In the weeks before Rocha’s death, she had been on and off suicide watch multiple times. And she had made at least one serious attempt at suicide in the past, when another potential parole hearing loomed. So the risk was very real. Still, the day immediately before her death, when her feelings about the upcoming hearing would be running particularly high, Rocha was unaccountably transferred off suicide watch and into a mental health unit where she managed to hang herself.

Then in June, one month after Rocha’s death, 27-year-old Shaylene Graves was found hanging in her cell, with just six weeks left to go on an 8-year sentence.

In 2017, a state audit of the uptick in prison suicides found that prisons failed to conduct behavioral risk evaluations and mental health treatment plans and did not properly monitor inmates at risk of suicide. The audit also found that prison staff members were not completing required suicide prevention and response training sessions.

State Auditor Elaine M. Howle recommended CDCR submit annual reports to the state Legislature on its progress toward remedying the problems found by the audit and by the Special Master.

On Wednesday, Governor Brown signed SB 960, a bill to that will make the State Auditor’s yearly reporting recommendation mandatory. The new law will also require the state to report on its efforts to improve systems for promptly notifying loved ones when an incarcerated individual has died, attempted suicide, been seriously injured, or fallen grievously ill.

Lawmakers included the family notification provision based on “numerous troubling reports” of families receiving delayed notification or no notification at all when their loved one has died, been seriously hurt, or become ill.

“Once SB 960 is implemented, California state prisons will be more responsive to the needs of inmates and be able to prevent suicides behind prison walls,” said bill author Senator Connie Leyva (D-Chino). “This measure will address the suicide crisis in our state prisons by making sure that inmates are able to receive proper mental health care and other services to prevent injuries and deaths.”

The bill was supported by the California Public Defenders Association, the Ella Baker Center for Human Rights, and at least 10 other organizations.