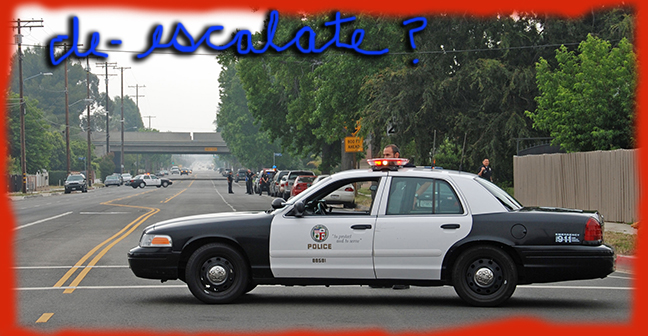 McBride, a director of the Police Protective League, the Los Angeles Police Department’s rank-and-file union, was testifying at a hearing called to discuss the commission’s proposal to establish new guidelines for officers’ use of force—and he didn’t mince words.

The guidelines, he said “will get officers killed, plain and simple.”

The union director went on to deliver a chilling warning to the five civilians who sit on the commission: “Make no mistake, if an officer is killed as a result …. [his] blood will be on your hands.”

McBride’s comments weren’t unexpected. They reflected the traditional distrust of cops for rules set by outsiders that limit officers’ ability to maneuver in fast-moving and often dangerous situations.

But McBride’s testimony was overshadowed by a just-released report on officer-involved-shootings in Los Angeles during 2015. The commission, which sets Los Angeles Police Department (LAPD) policy, could hardly avoid the alarming numbers spelled out in the report: 48 officer-involved shootings, 37 of which hit suspects, 22 of them fatally.

The eleven that hit no one were not warning shots: cops had simply missed their target.

Since 2014, caught-on-camera police killings have fueled a national movement for change, which only seems to grow stronger each month.

But no one listening to McBride that day could have avoided a stark comparison with some other big-city police departments. In Chicago, with a population that’s somewhat smaller than that of LA, and where gun violence seems to set new records each year, officers shot 22 people in 2015, killing eight. In New York, with roughly three times as many police officers and a population about twice as large as LA’s, officers shot 32 people last year, nine fatally.

The proposal by LA’s Police Commission, which so angered McBride, was far from radical. It focused on training cops to avoid the kinds of confrontations that lead to officers shooting unarmed civilians—-many of whom, as critics point out, are stopped on the flimsiest of pretexts.

The strategy is called “de-escalation.”

The force behind LA’s new strategy is commission president Matthew Johnson, who was named to the post only last year. Johnson, whose day job is managing partner of an entertainment law firm of 30 attorneys, is an African-American native of New Jersey. A graduate of New York University Law School, he moved to LA “literally three weeks,” as he put it, after the 1992 LA riots.

In formulating the strategy, Johnson took a lawyer’s careful approach. He first ordered a ten-year review of LAPD shootings. At the same time, the review examined a wide range of training policies that guide officer behavior and ultimately influence tactics, including procedures for handling the mentally ill, as well as alternatives to using deadly-force weapons.

Based on that review, the commission concluded that the department’s previous approach, which called on officers to demonstrate “a reverence for human life,” was far too vague. Instead, it called for a new approach that was not just aimed at minimizing shootings, but would train and reward officers who used de-escalation tactics to avoid them—and hold accountable cops who did not.

In its revised policy guidelines, the commission said that, henceforth, shooting a suspect would be considered “in-policy” only if it occurred as a last resort.

A key component of the stricter accountability called for in the guidelines was already in place. LAPD Chief Charlie Beck and the commission had instituted a requirement that all patrol officers wear body cameras, and that every patrol car be equipped with a camera.

Outside critics were already unhappy with some elements of the camera policy, namely providing the right to review any use-of-force tapes before an officer made a sworn shooting statement, thus allowing the officer to present his account in the best possible light, given the hard evidence represented by the video recordings.

Nevertheless, the support of Beck, and the grudging acceptance of the union for the cameras, gave the commission what it considered a crucial new oversight tool in adjudicating use-of-force incidents.

“The cameras,” Johnson said in a conversation with me, “have made a huge difference [in determining accountability.] At the end of the day the video is what the video is. You can only explain so much, but the video is going to stand on its own.”

Beck and the commission had already begun reviewing officer-involved shootings to consider not just whether the shooting was in or out-of-policy, but whether the tactics leading up to the shooting were appropriate. So some elements of the revised guidelines weren’t new.

What is different, however, is that, as a result of the commission’s decision, de-escalation will be written into official policy, mandating that officers be trained in de-escalation techniques that they must use in their interactions with citizens.

Failure to do so will now be cause to declare a shooting “out-of-policy,” even if the officer, because of his failure, had placed himself in a position where he felt he had to fire his weapon to protect himself. An out-of-policy finding has become a serious matter in the LAPD, one that can result in anything from required retraining, to a reprimand, loss of promotion, or firing.

Some of the de-escalation training is also already in place. Shooting scenarios are now performed with actors playing suspects. The scenarios graphically demonstrate how to avoid the need to shoot, focusing on when a trainee might have used de-escalation but didn’t.

“They learn how the right way of talking to a suspect, and the right display of empathy and body language [that] can de-escalate a situation,” said Beck.

Indeed, despite the union’s objections, some experts outside the LAPD do believe a well-executed de-escalation training regime can make officers—and the public—safer.

According to Michael Gennaco, who oversaw reform efforts for the Los Angeles County Sheriffs’ Department, officers can slow down an escalating situation by taking cover, and calling for back-up or specialized units. They can also try to calm individuals, being careful not to get so close to a suspect that a mere gesture might cause the officer to lose his or her cool.

Clearly, as Gennaco says, “Some shootings are unavoidable; you’ll never get to zero.”

But he adds, “You can strive to get the number as low as possible, and avoid the ‘lawful but awful’ kinds of deadly force incidents that we have seen too many times.”

Training in avoiding interactions that can quickly spin out of control is obviously critical—-but only if it’s built into community policing strategy. Successful police-citizen interaction ultimately has to be based on efforts to gain the acceptance and respect of the public. De-escalation of volatile incidents is only a first step.

Whether they fall “in” or “out” of the new policy guidelines, police shootings will continue to shock the public conscience unless law enforcement departments establish a clear goal of establishing legitimacy in the communities they serve.

Near the end of my interview with Matt Johnson, I asked him how the LA Police Commission would monitor compliance with the new policy, which is scheduled to be implemented within the next 30 days.

“We have an inspector general with a staff of 40 auditors and investigators who will insure the policy is complied with,” he said.

“And if this policy doesn’t work, we’ll try something else.”