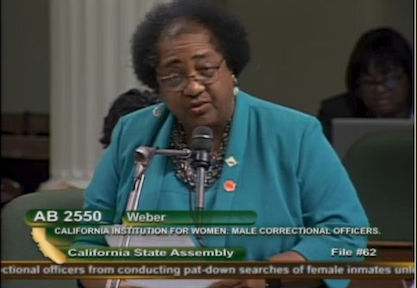 On Monday, California Governor Jerry Brown signed two noteworthy criminal justice bills–one to expand access to victim compensation, and the other to improve privacy protections for incarcerated women by banning male guards from patting them down or seeing them in a state of undress. Many more bills must still make it through the end-of-legislative-session gauntlet by August 31, to land on Gov. Brown’s desk.

The first bill, AB 1639, will block California’s Victim Compensation Board from denying a compensation claim “solely because the victim or derivative victim is a person who is listed in the CalGang system or alleged by local law enforcement to be gang involved.”

The state Victim Compensation Fund provides assistance to victims and family members of victims of violent crimes, sex crimes, elder abuse, drunk driving, human trafficking, stalking, and more. The Victim Compensation Board gives much-needed money to victims and their families to pay for medical treatment, mental health counseling, burial expenses, income loss, and other expenses that arise in the aftermath of a victimization.

The bill would also explicitly ban the board from denying compensation claims based on a victim’s immigration status.

Furthermore, the bill would direct the Victims Compensation Board to inform and train local distributors of victim compensation funds and services “that they cannot exclude people based on gang allegations or their immigration or documentation status.”

“AB 1639 breaks down systemic barriers and enhances the California Victim Compensation Board’s ability to assist survivors of crime to rebuild their lives with comprehensive and holistic, trauma-informed services,” said bill author Assemblyman Eduardo Garcia (D-Coachella). “Public safety agencies across our state will now be equipped with the means to provide victims and their families with information on the healing resources available to them. These restorative practices offer critical reinvestments in high crime rate areas, consequently burdened by poor socio-economics and paves a sustainable road for safer, empowered communities.”

(For more information on AB 1639 and the CalGang problem, read our earlier reporting: here.)

The second newly approved bill, AB 2550, will prohibit male prison guards from patting down female inmates in nearly all circumstances.

Senator Shirley Weber’s “Dignity for Incarcerated Women Act” will also ban male guards from entering areas like bathrooms where locked up women are not fully dressed.

The bill was amended, however, to allow male officers to search women in prison and to see them in a state of undress if a “prisoner presents a risk of immediate harm to herself or others or risk of escape and there is not a female correctional officer available to conduct the search.”

The bill is a product of #cut50‘s Dignity Campaign, an initiative led by formerly incarcerated women that seeks to improve conditions for the nation’s locked up women, including those forced to give birth while shackled, the mothers incarcerated hundreds of miles away from their children, women denied adequate access to feminine hygiene supplies, and the women who are sexual assault victims, but who must undergo strip searches and pat downs by male guards.

“This is a population that has been largely exploited and abused,” Weber said. ”More than 86 percent of women locked up are survivors of past sexual violence and 77 percent are survivors of partner violence. This bill seeks to reduce the potential that staff actions will traumatize or re-traumatize women in prison.”

A pile of criminal justice bills faces last-minute key votes before the state legislature adjourns on August 31, including:

A Bill to End the Felony Murder Rule

• SB 1437 – Under California’s felony murder rule, individuals involved in serious crimes that result in someone’s death face murder charges as if they were the killer, even if they had no intent or knowledge that a person would be injured or killed. SB 1437 seeks to end this rule. Instead, only individuals who actually kill, who intend to kill, or who show “reckless indifference to human life” during the course of committing a serious felony that results in murder will face murder charges.

One man, Shawn Khalifa, is serving a 25-to-life sentence for murdering an elderly man named Hubert Love when Khalifa was 15. But Khalifa didn’t kill Love. Khalifa didn’t even get near the man. Instead, the teen stole chocolates and ran out of Love’s house when he saw that the older man had been hurt by his friends. Because Khalifa was among a group of teenagers who broke into Love’s house looking for cash, and because one of those teens killed Love, Khalifa was convicted of first-degree murder under the state’s felony murder rule. (The Marshall Project, in collaboration with the New York Times, tells Khalifa’s story, as well as the stories of other youths ensnared by the felony murder law.)

•  AB 931 – The controversial “Police Accountability and Community Protection Act” would change the circumstances under which officers can use deadly force. Current law says that officers can use deadly force when “objectively reasonable”—when another officer with similar training and experience would have behaved similarly under the same circumstances. AB 931 would permit officers to use deadly force only to prevent imminent bodily harm or death, and when there are no reasonable alternatives to de-escalate the situation through verbal warnings, persuasion, or other non-lethal efforts. Under the bill, prosecutors would also be able to look at an officer’s actions leading up to a deadly use of force, and whether those actions were “grossly negligent” and put the officer unnecessarily in danger. The bill is currently in the Senate Rules Committee, and has until the end of August 31 to slide onto on Gov. Brown’s desk.

A Bill to Bring Sunshine to Police Misconduct Files

•  SB 1421 – A pro-transparency bill, SB 1421, aims to open up law enforcement personnel records to the public when officers use force or are found by their departments to have committed misconduct. Most states have far more public access to peace officer records, including misconduct allegations, than California does. SB 1421 would force police agencies in California to publicly release records related to incidents in which officers use force—specifically, when they discharge their firearms or Tasers, use a weapon to strike a person’s head or neck, or use force that results in serious bodily harm or death. The bill would also make public records of on-duty sexual assault, including when cops exchange sex for leniency. Finally, SB 1421 would give the public access to records when officers are found to have been dishonest in the “reporting, investigation, or prosecution of a crime.” SB 1421 is awaiting a final vote from the Assembly.

•  SB 1391 – In California 14 and 15-year-olds can be tried in the adult criminal justice system. SB 1391 would raise the age for adult court, keeping kids under 16 out of adult court. The bill passed through the Senate and is currently on the Assembly Floor.

•  SB 439 – A related bill, SB 439 would ensure that children under the age of 12 are excluded from prosecution in juvenile court, unless they have committed murder or rape. Many states have minimum ages for juvenile court prosecution. Not California. Nearly 1,000 pre-teens were referred to juvenile court in 2015. Around 250 of those kids were actually prosecuted.

•  AB 1793 – The state would automatically reclassify or expunge marijuana-related convictions from eligible Californians’ records under AB 1793, rather than require them to submit petitions for the changes to occur. The bill passed through the Assembly, and the Senate committees, and now heads for a full vote on the Senate Floor.

•  SB 1094 – Senate Bill 1094 would expand eligibility for people wrongfully convicted and imprisoned for crimes they did not commit to receive compensation. In California, those wrongfully imprisoned are entitled to $140 per day for the time they were incarcerated, but California’s Victim Compensation Board finds very few wrongfully convicted people to be eligible for compensation. The bill would extend eligibility to people whose convictions are vacated after new evidence emerges because either the prosecutors have dropped the charges, or because they have been acquitted after a second trial, both categories that were excluded before. SB 1094 is currently held in committee and under submission, but still has time to snag the final necessary votes to proceed to Brown for signature.

•  SB 1050 – Another bill to benefit exonerees, SB 1050, would update their criminal records to show that they had been wrongfully convicted. The bill would also ensure that newly released exonerees receive support and services like healthcare and job training to ease their transition back into their communities. This bill is nearing an Assembly Floor vote, after unanimously passing out of the Senate.

•  SB 1279 – This bill would limit a person’s sentence for two or more felony convictions and sentencing enhancements to twice as long as the individual’s base term. The bill passed through the Senate and will soon land on the Assembly Floor.

•  SB 1393 – Another sentencing reform bill, SB 1393, would give courts discretion to strike 5-year enhancements for prior, serious felony convictions when a person is being charged with a new, serious felony. The bill slipped through the Senate on a 23-14 vote, and is in line for a third reading in the Assembly.