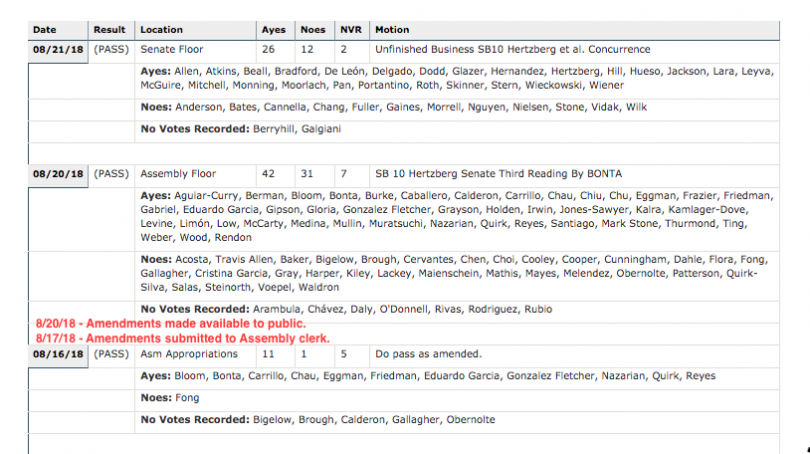 Editor’s Note: On Tuesday, August 21, the California Senate passed SB 10, the state’s bail reform bill, in a 26-12 vote, and sent it to the governor for signature. Just before it was pushed through both houses, legislators added amendments that substantially changed the nature of the bill, losing many former SB 10 supporters, including the ACLU, in the process. In the commentary below, Dan Walters of CALmatters argues that the amendments may also have violated the spirit of voter-approved Proposition 54, which established a 72-hour public review period for bills before a final vote, in order to prevent legislators from slipping in eleventh-hour sneaky changes without public notice.

Two years ago, nearly two-thirds of California voters supported a ballot measure to crack down on legislative trickery.

For decades, state lawmakers had dodged the public by secretly drafting important bills and then quickly jamming them through both legislative houses. They became known as “mushroom bills” because they sprouted in the dark of night.

Proposition 54, backed by a wide array of civic groups and with $10.7 million in campaign financing from wealthy Stanford University physicist Charles Munger Jr., sought to curb mushroom bills by stating, “No bill may be passed or ultimately become a statute unless the bill with any amendments has been printed, and distributed to the members, and published on the Internet, in its final form, for at least 72 hours before the vote….”

Capitol politicians despise Proposition 54 and have tried to work around it. But what happened last week on a highly controversial measure to outlaw cash bail may take the cake.

Senate Bill 10 had sat in limbo for nearly a year while lobbyists for the interest groups involved, such as bail bond agents and criminal-justice reformers, negotiated among themselves and with legislators, Gov. Jerry Brown’s office and state Supreme Court Chief Justice Tani Cantil-Sakauye.

Suddenly, on Aug. 16, the dormant bill, carried principally by Sen. Bob Hertzberg, a Van Nuys Democrat, was revived in the Assembly Appropriations Committee and passed. A day later—on a Friday afternoon—major amendments to the bill were submitted to the Assembly clerk’s office.

However, the official records pertaining to SB 10, including the bill itself, say the amendments were adopted the following Monday, Aug. 20, just before the Assembly approved it on a 42-31 vote. A day later, the Senate gave final approval, sending the bill to Brown for certain signature on a 26-12 vote.

Hertzberg and others contend that the 72-hour rule was obeyed by submitting the amendments—essentially an entirely new bill—to the Assembly clerk on Aug. 17. However, the amended bill was not truly available to the public until Aug. 20, the day of the Assembly’s vote.

The process may—or may not—have adhered to the letter of the 72-hour requirement, but it certainly violated its spirit of giving the public time to examine and react to pending legislation.

The revised measure, largely reflecting wishes of Cantil-Sakauye, does away with cash bail, but it provides judges with wide discretion in deciding who may be released from custody while awaiting trial and creates a massive new bureaucracy to evaluate defendants.

The changes alienated many bail reformers, including the American Civil Liberties Union and California Attorneys for Criminal Justice, which said, “We believe there is a substantial likelihood that more people will be incarcerated pretrial than under current law.”

Legislative leaders were clearly concerned that the opposition, an odd-bedfellows alliance of bail reformers and bail bond agents, could, if given several days to work on wavering legislators, peel away enough votes to block passage. So they wanted to move quickly.

Legislative leaders also faced heavy pressure from unions, particularly the Service Employees International Union, to pass the bill because the new bureaucracy it would create would mean thousands of new unionized civil-service workers.

By stretching Proposition 54’s rules, the tricky timing of SB 10 could create a new template for writing more mushroom bills. A challenge in court from Proposition 54 backers could test its legality. But the judges who would decide such a case also are principal interests in the bill.

Dan Walters is an opinion columnist for CALmatters, where this commentary first appeared.