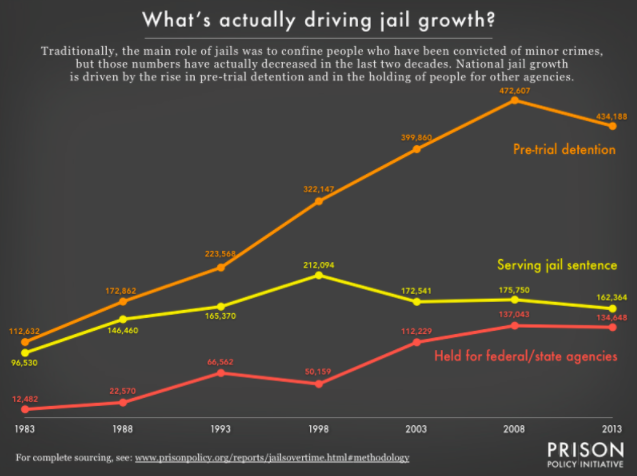 While the number of convicted individuals serving jail sentences across the nation has been decreasing for nearly two decades, jail populations have continued to soar, tripling since the 1980s, according to a report from the non-profit Prison Policy Initiative’s Joshua Aiken.

The rapidly expanding jail population can be attributed to a growing reliance on pre-trial detention, as well as an increase in the practice of leasing out jail beds to state prison systems and federal agencies—like Immigration and Customs Enforcement.

In addition to causing overcrowding in jails, the cash bail’s punishment-until-proven-innocent system has a disproportionately negative impact on poor and minority Americans.

Jails warehouse defendants awaiting trial, even if they pose no flight risk.

In Los Angeles County, for example, nearly half of jail inmates are being held while they await trial, often because they cannot afford to post bail, according to Sheriff Jim McDonnell. In March, LA County joined a growing number of municipalities looking into reforming their cash bail systems. At the state level, legislators in both the Senate and Assembly have bills to kill rein in the cash bail system. But those bills face serious opposition from the bail industry, led by a fear-mongering Duane Chapman (better known as Dog the Bounty Hunter).

In addition to pre-trial detainees, in more than half of US states, 10% or more jail inmates are people held locally on behalf of state or federal agencies. In many states, local governments are leasing far more than 10% of their jail beds. In Louisiana these non-traditional jail inmates account for more than 65% of the total jail population. Approximately 50% of the jail beds in Kentucky and Mississippi are leased to other agencies.

States account for a large portion of these locally leased beds, but the US Marshals Service rents about 26,200 cells, and ICE accounts for about 15,700 (although that number may increase under the Trump administration) leased beds.

While leased jail space and the booming bail industry account for much of the jail population growth over the last few decades, there are other culprits. Harsh sentences, under-funded and over-burdened courts, citation and arrest practices, and a dearth of pre-trial and diversion programs nationally are also partly to blame, Aiken writes.

Although county and city law enforcement agencies run local jails, Aiken says that jails are not solely a local concern, and must not be ignored by state lawmakers and justice reform advocates.

The report recommends that states downgrade low-level misdemeanor charges that do not present a threat to public safety into “non-jailable” crimes.

Additionally, states should cite, rather than arrest for certain low-level crimes, and for people suffering from mental illness or substance abuse, state-funded, treatment-focused diversion programs should be the first resort, Aiken says.

States should also abolish money bail and for-profit probation, according to the report, which urges the public release of data on local probation fees.

The report also recommends taking a close look at whether renting local jail space to state and federal agencies is in the best interest of local needs.