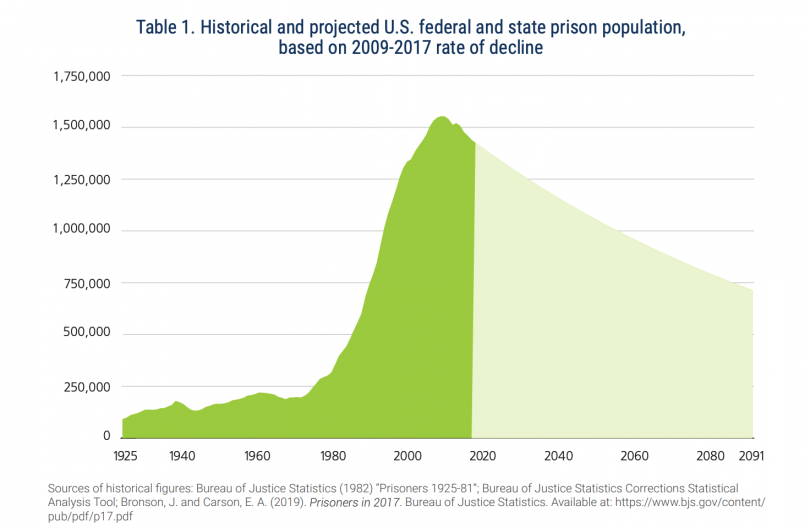 From 1972, the nation’s prison population exploded, growing 700 percent until it peaked in 2009. Since that peak, the number of people locked up in state and federal prisons has dropped just 7.3 percent through sentencing reforms and other criminal justice system changes. At the same time, crime rates have been hovering near historic lows.

By 2017, 39 states and the feds had reduced the number of people locked in prison cells from the height of mass incarceration. Alaska, New Jersey, Vermont, Connecticut, and New York led the pack, with reductions that topped 30 percent. California and Rhode Island were the next highest, with 25 percent each.

In a total of 14 states, including Texas (the state with the largest prison population), imprisonment rates dropped by less than 5 percent from their individual peak years. Eleven more states failed entirely to reduce overall imprisonment, despite many of those states experiencing significantly reduced crime rates. The prison population in one state, Arkansas, ballooned by 23 percent between 2012 and 2017.

At the rate that states are currently emptying prisons, it would take the U.S. more than 70 years — until 2091 — to cut the prison population in half, according to a new analysis by The Sentencing Project’s Senior Research Analyst Nazgol Ghandnoosh.

At the end of 2016, there were approximately 1.5 million people in state and federal prisons. When jails are included, the population total jumps to more than 2.2 million.

“Clearly, waiting seven decades to substantively alter a
system that is out of step with the world and is racially biased is unacceptable,” Ghandnoosh writes.

Achieving the 50 percent goal would require aggressive reforms — even beyond drastically reducing the number of people behind bars for drug crimes — according to Ghandnoosh.

“Expediting the end of mass incarceration,” he says in his report, “will require accelerating the end of the Drug War and scaling back sentences for all crimes, including violent offenses for which half of people in prison are serving time.”

The number of people in prison for violent crimes decreased by just 2 percent between the nation’s height of imprisonment in 2009 and 2016, according to the report.

“The reluctance to scale back excessive sentences for this population,” writes Ghandnoosh, “is at odds with evidence that long sentences incapacitate older people who pose little public safety threat, produce limited deterrent effect since they do not increase the likelihood of arrest, and detract from more effective investments in public safety.”