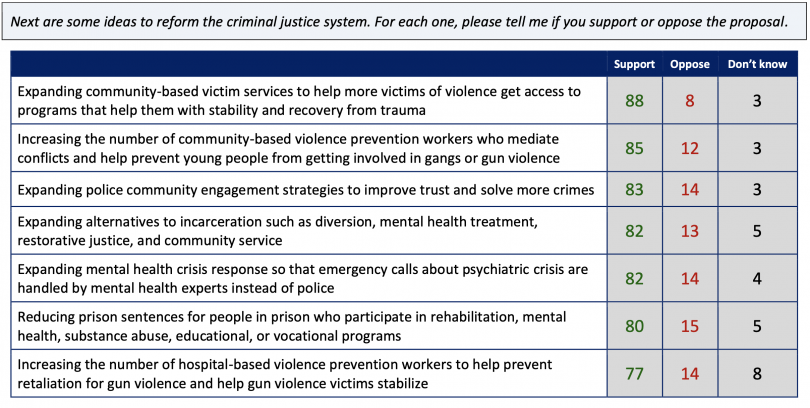 In the ongoing battle between those who are in favor of the newly instituted justice reform policies of Los Angeles County District Attorney George Gascón, and those who are not, one of the main weapons used by the anti-Gascón groups — such as the local prosecutors’ union, the LA Association of Deputy District Attorneys, the California District Attorney’s Association, plus several conservative-leaning DAs in other counties — is the accusation that the DA who defeated incumbent Jackie Lacey in November 2020 has abandoned the needs of victims of crime in his rush toward reform.

Schubert’s point of view was supported by the members of two LA County families, each of which had a loved one who had been brutally murdered.  These crime survivors told Fox and Friends about their distress at the LA DA’s decision that his office was taking the death penalty off the table, no matter how ghastly the crime.  This change, like most of Gascón’s other reform actions, was among the campaign promises, which helped get him elected.

The families of crime victims who were on Fox and Friends, plus some others, have also appeared on local television, and most of the group have become part of a new push to recall the new district attorney.  For the recall to get on the ballot, the recall supporters have to gather 580,000 signatures of registered voters.

(LA County Sheriff Alex Villanueva has also announced his support for the recall.)

Yet, Gascón disputes the claim that most victims of crime oppose his reform efforts.  He also points to the “special directive” issues on the day of his swearing that sets up a victims right program that will, the text of the directive states,  “pursue a system of parallel justice, where we not only seek legal prosecution of offenders, but also provide support services for victims in their evolution to becoming survivors.”

Gascón has also named a Crime Victims Task Force, the first of its kind in the LA DA’s office. More than half of the task force members are people who have had immediate family members murdered, or have been victims of violent crime themselves.

So is that enough to make most crime victims feel that they are being heard and appropriately supported?

What is the truth of the matter?

A big part of that answer may be found in a new survey, released on Thursday, March 4, by Californians for Safety and Justice, released a survey conducted by David Binder Research which surveyed victims and survivors of crime living in Los Angeles County and asked them a set of questions about their needs and perspectives on aid to crime victims and on justice reform.

Specifically, during the week-long period of February 3 to 10, 2021, the researchers surveyed 2,000 adults in Los Angeles County. The interviews, according to Binder researchers, were conducted by cell phone, landline, and online, in English and Spanish.

Out of that 2000, a total of 724 respondents reported having experienced violent crime, including those who lost an immediate family member to homicide.

The researchers then asked the the 724 victims of violent crime a series of questions.

First they asked about what help the respondent had received as a victim of crime.  The survey learned that  only 1 out 3 of the crime victims said that LA county’s criminal justice system — presumably meaning the DA’s office and/or law enforcement, or the courts — was helpful in providing information about support services.

It turned out that only 1 in 4 — or 25 percent — said they were informed about victim compensation at all.

Furthermore, the majority of the victims of violent crime surveyed said they did not receive support services, period.  The majority also indicated that, yes, they would have wanted that help and support, had they known it was available.

Interestingly, those with incomes under $75,000 were much less likely than those with higher incomes to say they received this information.

Justice reform or tough on crime?

The results indicated, according to Binder researchers, “that the majority of survivors of violent crimes want changes to the criminal justice system that “emphasize rehabilitation and crime prevention, rather than more incarceration.”

For example, six in ten of the crime victims questioned indicated that “rehabilitation, mental health, and drug treatment are better than punishment through incarceration for preventing future crimes.”

Two out of three of the respondents wanted “individual circumstances taken into account when deciding a sentence, “rather than automatically adding years onto a sentence based on past convictions.”

(For those interested in all of the responses, you can find the rest of the outcomes here.)

Reactions to the survey

When the survey was released,  Gascón said he was not surprised  by the findings.

“This poll of LA survivors confirms what similar national surveys have shown,” he said in a statement. “The vast majority of victims are seeking healing, restoration and rehabilitation rather than retribution.”

The LA prosecutors union, in contrast, blew off the research as partisan and irrelevant.

The justice-reform-minded nonprofit, Californians for Safety and Justice (CSJ), said the ADDA,  got results that “reflected the desired outcome of the organization.”

CSJ, according to the union, “used partisan techniques under the guise of conducting an opinion poll.”

It is sad, said the prosecutors said in an emailed statement, that is also posted on their website, “to see that those interest groups seeking to conduct reckless experiments on our criminal justice system are also manipulating crime victims to further their cause.”

They offered no examples of these allegations.

As it happens, the newly released survey is not the first time that California’s crime victims have been polled for their perspectives on crime and consequence.

Eight years ago, in April 2013, Californian’s For Safety and Justice  hired the Charles Binder Research people to do a far larger survey, that was reportedly the first-ever statewide survey of California crime victims.

For the 2013 poll,  the researchers randomly contacted and interviewed 2,600 California residents, of which 500 self-identified as having been a victim of a crime within the past five years. (The specific crimes on the survey’s check list were robbery, burglary, theft — including identity theft — assault, rape, vandalism, stalking and the murder of an immediate family member.)

The questioning for this first poll, was more extensive than that of the LA county poll released last week.  But the outcomes were largely the same:

It found that California crime victims are greatly impacted by crime, which causes them to suffer from stress and trauma, from which it often takes a long time to recover, if recovery happens at all.  Yet many are not aware of the services that are available to help in their recovery.  And those who are aware commonly found those services to be difficult to access.

When asked about their attitudes about sentencing, incarceration and justice reform, by a margin of more than two to one, the crime victims in every demographic surveyed indicated they wanted the state to focus on “providing supervised probation and rehabilitation programs” instead of more prisons and longer sentences.  When it came to African American, Latin, and lower-income victims, the percentages of those preferring reform, were the most dramatic.

A national poll of victims of violent crime, which was conducted in 2016, and looked at crime victims perspectives on justice policies and prison reform produced similar outcomes as that of the California poll and the LA County Poll.

Use and misuse of crime victims

In the law-and-order decades of the 1980s and 1990s  before justice reform gained a foothold in the State of California, into the early 2000s, victims of violent were the flag of choice to wave for anyone lobbying  for tougher laws and against  reform.

The undisputed leader in this endeavor was California’s powerful and wealthy prison guards’ union, the California Correctional Peace Officers Association or CCPOA.  Their power came into being under the leadership of Don Novey,  became the organization’s president.  Novey, who is now retired, rightly figured out that the path to power for the union required two important things:  a lot money to spread around to policy makers, and a better public-facing image than simply corrections officers.  So the CCPOA began supporting, and coaching struggling crime victims organizations such as Crime Victims United and others.  The strategy worked stunningly well.

These were legitimate victims groups whose founders and members had seen their lives shattered by crime and violence, and now they believed stronger laws were needed to prevent such shattering for others. But while these groups with whom the CCPOA partnered represented victims of violent crime, they didn’t represent the majority –mainly because most of the spokespeople for the groups that the CCPOA sponsored were white.  Whereas, then and now, the majority of homicide victims in California, or those who have had a family member murdered, are Latinx or Black.

The same is true for murder victims and their families in Los Angeles County, as the 2019 chart below by our friends at Crosstown suggests.

(Crosstown is a nonprofit news organization based out of the USC Annenberg School of Communication and Journalism, which covers the neighborhoods of Los Angeles through data.) 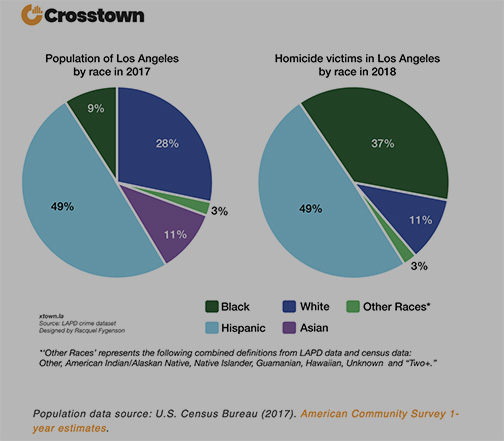 Furthermore, most of LA County’s violent victim and their families — if we are to believe last week’s survey, along with statements by justice reform activists many of whom have themselves been victims of crime — want programs that emphasize violence prevention, alternatives to incarceration, and expansion of victim services, not the toughest possible sentences.

“It’s exploitative,” Gascon tweeted after the March 4, survey was released, “for proponents of mass incarceration to justify the cost, racial disparities & non-existent safety benefit in the name of victims who overwhelmingly do not support tough-on-crime policies.”