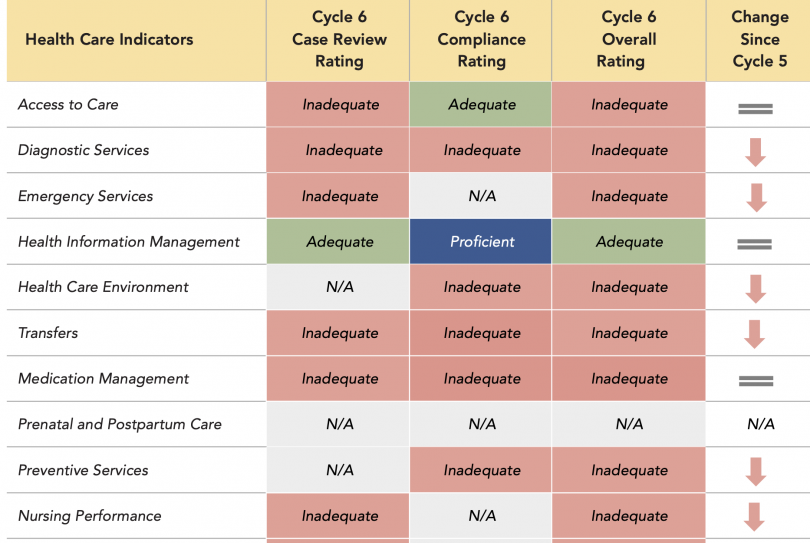 The still-lingering federal oversight, came in response to a 2001 class-action lawsuit against the state of California over the quality of medical care in the state’s 33 prisons. When the lawsuit—known as Plata v. Schwarzenegger—reached the U.S. Supreme Court, the Supremes found that, as the plaintiffs had contended, the state of the medical care in those 33 facilities, was chronically awful enough to constitute a violation of the Eighth Amendment of the U.S. Constitution, which forbids, among other things, cruel and unusual punishment of the incarcerated.

The state settled the suit in 2002, agreeing to an array of methods of remedying the state of prison health care to the point that it would meet constitutional standards.

Unfortunately, various facilities continue to fall out of compliance of those standards, in the lawsuit that eventually and famously morphed into Plata v. Brown in 2010, due to the untenable level of overcrowding in California’s prisons.

More recently, Plata has produced the offshoot of Plata v. Newsom, a development that continues to make depressingly clear how chronically not solved the issue has become.

(You can read WLA’s story on Plata v. Newsom here.)

Now, according to the state’s Office of the Inspector General (the OIG), which is responsible for periodically reviewing and reporting on the delivery of the ongoing medical care provided to incarcerated persons in the California Department of Corrections and Rehabilitation, the latest CDCR facility to be found out of compliance by the OIG, is High Desert State Prison, a high security facility located near Susanville, CA, where many of its employees live.

The OIG based its most recent review on a system of 15 indicators, and came up with a total compliance score for each applicable indicator. In addition, the investigators reviewed individual cases. They also went to the prison to do physical inspections, and to interview staff.

Among their goals, the report’s investigators tried to determine, in general, whether providers have been using “sound medical judgment in the course of caring for a patient,” a baseline that doesn’t seem like much to ask.

In the event the OIG’s examiners found errors, they then determined whether such errors were “clinically significant” or led to a “significantly increased risk of harm to the patient.”

At the same time, the examiners probed whether or not the institution’s medical system had “mitigated the error” after it was discovered.

OIG case reviewers (a team of physicians and nurse consultants) assessed 10 of the 13 indicators applicable to HDSP. (A couple of indicators were not applicable in that they specifically pertained to females, and High Desert is a prison for men.)

The OIG investigators also rated the overall adequacy of care for each of the 20 detailed case reviews they conducted.

Of these 20 cases, none were proficient, 12 were adequate, and 8 were deemed inadequate.

Within the 1,036 events reviewed, there were 430 deficiencies, 124 of which the OIG clinicians considered to be of such magnitude that, if left unaddressed, would likely contribute to patient harm.

Examples include the following:

One examination showed that “when patients returned from an off-site, hospitalization or an emergency room visit, they did not receive their needed medications within the required time frame” after they got back.

In one such case, the patient’s medication needed to avoid seizures medication was not provided after returning “until the patient was found on the floor” reporting on having just had a seizure.

There was no terrible event for this patient after missing critical amounts of medication, but the report suggested that in many instances, “harm” could have occurred.

The report contained some instances of good news countered by an alarming amount of “bad news,” such as the fact that medication screw ups seemed less frequent than the failure by staff to give the needed medication at all.

At High Desert, these medication failures were among a list of other chronic patterns of mistakes that led the OIG to find nursing care in general to be “poor.”

For instance, in one chapter of the report, investigators noted that, even though the facilities’ nurses evaluated most patients in a timely way, those same nurses frequently performed “incomplete” assessments and, alarmingly, many did not complete the most basic of evaluations, which was to check the patient’s “vital signs.”

When the nurses did perform full assessments, they often did not notify the appropriate medical person above them of any abnormal findings in their patients conditions, or of urgent symptoms.

On the flip side of the failure to give needed medications was what the report described as a Suboxone misuse epidemic.

Suboxone, for those unfamiliar, is an addiction treatment medication used in opioid replacement therapy. Yet, as an opiate itself, it has potential for abuse, a problem that, according to the OIG’s report, that was allowed to flower unchecked at HDSP to an extremely dangerous degree. The result was that patients who had previously presented with benign symptoms, according to the report, were now developing skin infections, spinal accesses, bone infections, and heart infections.

Things in nearly every category, including the cleanliness of the place, unsurprisingly seemed to grow worse during the period of increased workload related to the COVID- 19 pandemic.

During that period, the prison’s leadership simply stopped completing nursing performance audits at all, according to the report.

What the OIG examiners did their own examinations, they found conditions—as was true in other state prisons— that were a recipe for for the rapid transfer of the virus. Furthermore, many of those presenting clear COVID systems were ignored.

“We found that symptomatic patients were not always assessed by the RN for COVID-19 symptoms, and nursing staff was not always available to perform vital signs,” the examiners wrote.

When a resident was diagnosed, rather than being quarantined in dedicated areas, “patients were quarantined in their housing units instead,” meaning, unsurprisingly, they gave the virus to other residents of their units.

Many of the individual “encounters” with nursing staff, that were COVID related, were cause for concern, according to the examiners.

In one case, for example, “the nurse assessed a patient with COVID-19 pneumonia. The patient had greatly diminished breath sounds, but the nurse did not immediately arrange for transport” to the hospital, or “call a medical emergency.”

Of the examiners’ documented 246 “nursing encounters, 21 events were directly related to COVID-19 quarantine or isolation rounds.” Of those the examiners identified “118 nursing performance deficiencies, 30 of which were significant.”

“Overall,” wrote the examiners, “we rated this indicator inadequate.”

Although, admittedly the inadequate care and decision making when it came to COVID was frighteningly worse, and more deadly, at certain other facilities such as San Quentin and California Institute for Men, it was reportedly nevertheless dangerously lax at HDSP.

The OIG”S report on conditions as High Desert State Prison continues to detail its assessments for a total of 120 dispiriting pages.