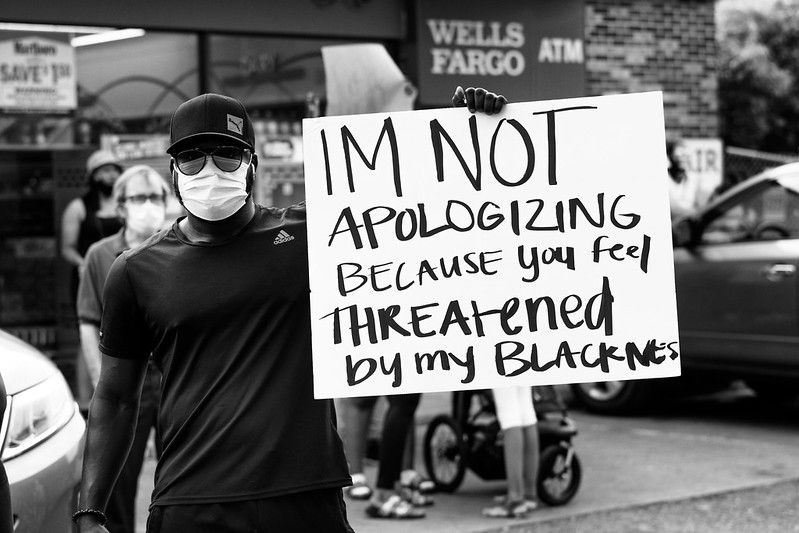 By Allissa V. Richardson, The Conversation

As Ahmaud Arbery fell to the ground, the sound of the gunshot that took his life echoed loudly throughout his Georgia neighborhood.

I rewound the video of his killing. Each time I viewed it, I was drawn first to the young black jogger’s seemingly carefree stride, which was halted by two white men in a white pickup truck.

Then I peered at Gregory McMichael, 64, and his son Trevor, 34, who confronted Arbery in their suburban community.

I knew that the McMichaels told authorities that they suspected Arbery of robbing a nearby home in the neighborhood. They were performing a citizen’s arrest, they said.

The video shows Arbery jogging down the street and the McMichaels blocking his path with their vehicle. First, a scuffle. Then, gunshots at point-blank range from Travis McMichael’s weapon.

My eyes traveled to the towering trees onscreen, which might have been the last things that Arbery saw. How many of those same trees, I wondered, had witnessed similar lynchings? And how many of those lynchings had been photographed, to offer a final blow of humiliation to the dying?

A series of modern lynchings

It may be jarring to see that word – lynching – used to describe Arbery’s Feb. 23, 2020, killing. But many black people have shared with me that his death – followed in rapid succession by Breonna Taylor’s and now George Floyd’s officer-involved murders – hearkens back to a long tradition of killing black people without repercussion. 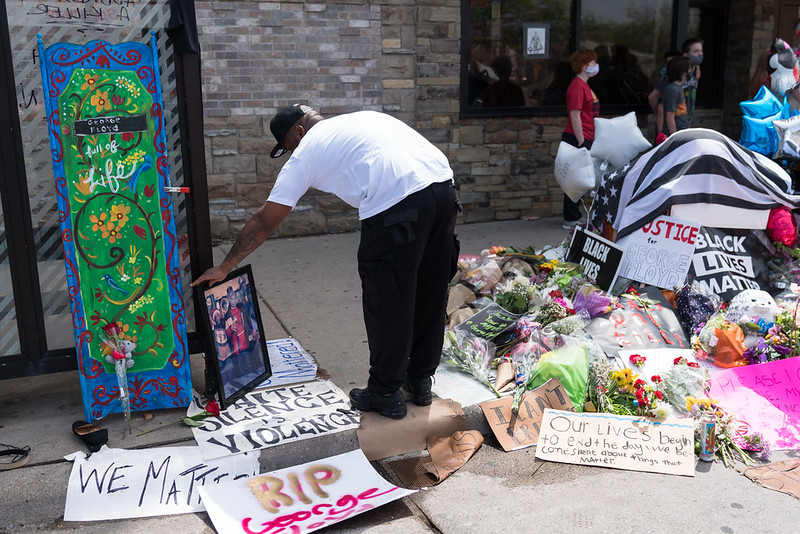 Perhaps even more traumatizing is the ease with which some of these deaths can be viewed online. In my new book, “Bearing Witness While Black: African Americans, Smartphones and the New Protest #Journalism,” I call for Americans to stop viewing footage of black people dying so casually.

Instead, cellphone videos of vigilante violence and fatal police encounters should be viewed like lynching photographs – with solemn reserve and careful circulation. To understand this shift in viewing context, I believe it is useful to explore how people became so comfortable viewing black people’s dying moments in the first place.

Every major era of domestic terror against African Americans – slavery, lynching and police brutality – has an accompanying iconic photograph.

The most familiar image of slavery is the 1863 picture of “Whipped Peter,” whose back bears an intricate cross-section of scars.

Famous images of lynchings include the 1930 photograph of the mob who murdered Thomas Shipp and Abram Smith in Marion, Indiana. A wild-eyed white man appears at the bottom of the frame, pointing upward to the black men’s hanged bodies. The image inspired Abel Meeropol to write the poem “Strange Fruit,” which was later turned into a song that blues singer Billie Holiday sang around the world.

Twenty-five years later, the 1955 photos of Emmett Till’s maimed body became a new generation’s cultural touchstone. The 14-year-old black boy was beaten, shot and thrown into a local river by white men after a white woman accused him of whistling at her. She later admitted that she lied.

Throughout the 1900s, and until today, police brutality against black people has been immortalized by the media too. Americans have watched government officials open firehoses on young civil rights protesters, unleash German shepherds and wield billy clubs against peaceful marchers, and shoot and tase today’s black men, women and children – first on the televised evening news, and, eventually, on cellphones that could distribute the footage online.

When I conducted the interviews for my book, many black people told me that they carry this historical reel of violence against their ancestors in their heads. That’s why, for them, watching modern versions of these hate crimes is too painful to bear.

Still, there are other groups of black people who believe that the videos do serve a purpose, to educate the masses about race relations in the U.S. I believe these tragic videos can serve both purposes, but it will take effort. 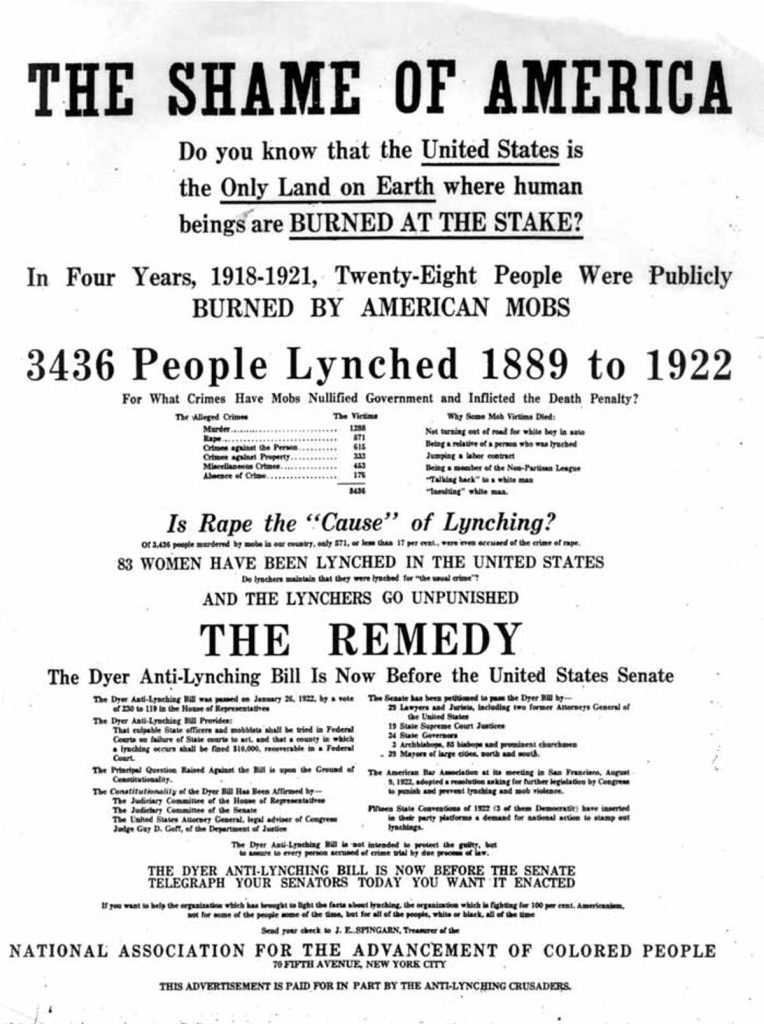 In the early 1900s, when the news of a lynching was fresh, some of the nation’s first civil rights organizations circulated any available images of the lynching widely, to raise awareness of the atrocity. They did this by publishing the images in black magazines and newspapers.

After that image reached peak circulation, it was typically removed from public view and placed into a “shadow archive,” within a newsroom, library or museum. Reducing the circulation of the image was intended to make the public’s gaze more somber and respectful.

The National Association for the Advancement of Colored People, known popularly as the NAACP, often used this technique. In 1916, for example, the group published a horrific photograph of Jesse Washington, a 17-year-old boy who was hanged and burned in Waco, Texas, in its flagship magazine, “The Crisis.”

Memberships in the civil rights organization skyrocketed as a result. Blacks and whites wanted to know how to help. The NAACP used the money to push for anti-lynching legislation. It purchased a series of costly full-page ads in The New York Times to lobby leading politicians.

Though the NAACP endures today, neither its website nor its Instagram page bears casual images of lynching victims. Even when the organization issued a statement about the Arbery killing, it refrained from reposting the chilling video within its missive. That restraint shows a degree of respect that not all news outlets and social media users have used.

Critics of the shadow archive may argue that once a photograph reaches the internet, it is very difficult to pull back from future news reports.

This is, however, simply not true.

Images of white people’s deaths are removed from news coverage all the time.

It is difficult to find online, for example, imagery from any of the numerous mass shootings that have affected scores of white victims. Those murdered in the Sandy Hook Elementary School shooting of 2012, or at the Las Vegas music festival of 2017, are most often remembered in endearing portraits instead.

In my view, cellphone videos of black people being killed should be given this same consideration. Just as past generations of activists used these images briefly – and only in the context of social justice efforts – so, too, should today’s imagery retreat from view quickly.

The suspects in Arbery’s killing have been arrested. The Minneapolis police officers involved in Floyd’s death have been fired and placed under investigation. The videos of their deaths have served the purpose of attracting public outrage.

To me, airing the tragic footage on TV, in auto-play videos on websites and social media is no longer serving its social justice purpose, and is now simply exploitative.

Likening the fatal footage of Ahmaud Arbery and George Floyd to lynching photographs invites us to treat them more thoughtfully. We can respect these images. We can handle them with care. In the quiet, final frames, we can share their last moments with them, if we choose to. We do not let them die alone. We do not let them disappear into the hush of knowing trees.

Allissa V. Richardson is an assistant professor of journalism at the USC Annenberg. She researches how marginalized communities use mobile and social media to produce innovative forms of journalism — especially in times of crisis.

Richardson is the author of “Bearing Witness While Black: African Americans, Smartphones and the New Protest #Journalism.” The book explores the lives of 15 mobile journalist-activists who documented the Black Lives Matter movement using only their smartphones and Twitter, from 2013 to 2017.

She is a pioneer in mobile journalism (MOJO), and has launched the first smartphone-only college newsroom in 2010. The MOJO Lab, based on the campus of Morgan State University in Baltimore, expanded globally in 2011 to include classes for allied nonprofit organizations in Morocco and South Africa

This essay is republished from The Conversation under a Creative Commons license. You can also read the essay in its original form at the Conversation here.

Leave a Reply to Rakkasan X