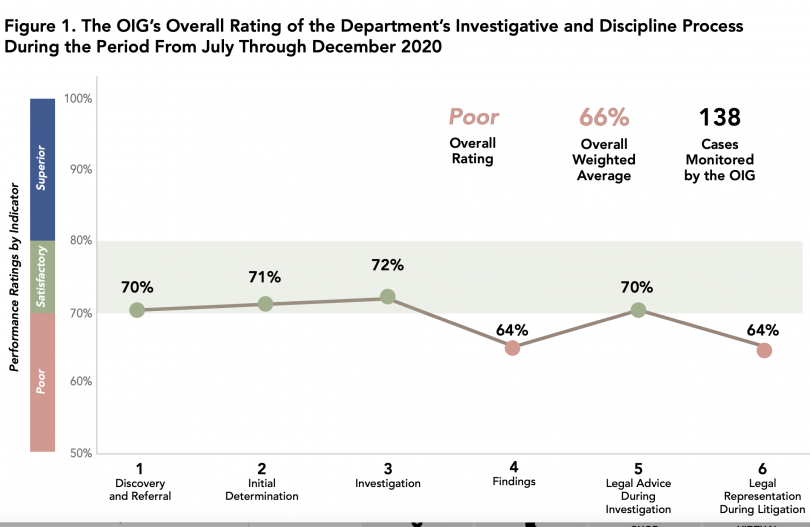 The semi-annual report from the California Office of the Inspector General on the topic of “Internal Investigations and the Employee Disciplinary Process of the California Department of Corrections and Rehabilitation,” came out on May 19, 2021, and it is disturbing, especially for those who have loved ones in any of the state’s prisons.

The heart of what Inspector General Roy W. Wesley reported to Governor Gavin Newsom, was that the overall quality of the CDCR’s investigation of employee misconduct was not at all good–– an assessment that points beyond itself to an environment of dehumanization and danger in the state’s prison system.

As for the report itself:

“Specifically, we assessed the performance of the three entities within the department responsible for conducting internal investigations and managing the employee disciplinary process: hiring authorities (such as prison wardens), the Office of Internal Affairs, and department attorneys,” IG Wesley wrote.

“Between July 1, 2020, and December 31, 2020, we monitored and closed 138 cases throughout California, and concluded that the department’s overall performance in conducting internal investigations and handling employee discipline cases was poor.”

The IG’s first example of the kind of problems his office monitored  had to do with two correctional officers who falsely reported that a man who had been decapitated by his cellmate, was still alive when the guards conducted their “count” of the incarcerated men on the two guards’ rounds.

The misconduct by those four officers was made worse when the special agent who was assigned to investigate the whole thing did not bother to interview critical witnesses.

Most important of all, the investigator didn’t look into whether the two men in the cell, one of whom killed the other, should have been put into the same cell in the first place, or whether there were red flags that, had they been noticed and acted upon, could have prevented the brutal death of the beheaded man.

Another disturbing case the IG recounted concerned a man who was kicking his cell door trying to get someone’s attention, while he yelled to anyone who was within earshot that he was suicidal. An officer who was one of those charged with checking on the man, allegedly ignored the man’s kicking and shouting.

The same officer also failed to report that the man had covered up his cell window, and was “unresponsive.”

Instead the officer documented — falsely — that he had seen the man alive during various security checks and counts.

Perhaps more incredibly, the psychiatric technician who should have checked on the reportedly suicidal man, instead failed to observe the man during her clinical rounds. Then she allegedly documented that she had conducted a conversation with man threatening suicide, when she had done no such thing. After that she lied about the matter in an interview with Internal Affairs.

Compounding the problem,  the Office of Internal Affairs failed to complete their investigation of the matter in anything resembling a timely fashion, never mind that the first officer who ignored the incarcerated man’s call for help before he killed himself, should have been terminated. Instead, he kept on working while IA dragged its feet on investigating.

The report described a lot more cases in which authorities let months pass before referring the allegations of wrongdoing to Internal Affairs, by which time, any thorough investigation, no matter how well intentioned, became much more difficult to conduct.  As with the officer who ignored the cries of the suicidal man, this in turn meant that officers who had allegedly committed firing offenses, simply kept  on working, while the state paid the bills.

In one case, an officer was accused of engaging in sexual activity with one of the prison’s residents, in addition to providing the same person with “mobile phones, drugs, and tobacco.”

In another case, an off-duty officer fired a gun at the feet of a process server who was attempting to give a subpoena to the officers’ mother.

In still another case a corrections officer was accused of sexually assaulting children while off duty.

The report included several instances of deadly force.  In one case,  an officer fired a “warning shot” to stop some men who were attacking another man on the exercise yard.  But, although the officer said he fired his Mini-14 semi-automatic rifle  at an unoccupied area 30 feet away from those participating in the attack, the evidence suggested the officer had fired the rifle at or near the men, hitting of them, non-fatally

Yet, even in the cases involving fatal incidents (which, again, the Mini-14 incident was not), the investigations the IG tracked were often irrationally slow.  And when they did take place, often the most basic of investigative principles, such as interviewing eye witnesses, were ignored.

This was true even though, due to the presence of the COVID-19 pandemic, the report noted, the period of time given inspectors for their investigations was extended by two months past the usual time period allowed.

Despite the extra time, a significant percentage of the investigations still appeared to be inexplicably lethargic, when it came to timing and rigor.

In reading the IG’s newest report, WitnessLA noticed that the case of the decapitated man was unsettlingly reminiscent of another murder of an incarcerated man that took place in March 2019, in the California State Prison at Corcoran.  This killing at Corcoran was also a decapitation and was also committed by the dead man’s cellmate.

As with the incident in the IG’s new report, in the March 2019 case, there appeared to have been plenty of red flags that something was terribly wrong but the the corrections officers allegedly ignored them.

In the March 2019 case, there were also many strong reasons to believe that the safety of the cellmate who was killed was not adequately considered by staff before he was put into living quarters with another man who had a history of emotional instability that had been previously acted out in the form of extreme violence.

The mother of Luis Romero, the man murdered by his cellmate in March 2019, filed a federal civil rights suit last year.  The complaint, written by attorneys Justin Sterling and Erin Darling, is harrowing to read, and will likely produce a high ticket payout by the taxpayers of California.

Meanwhile, this past Friday, the IG’s report seemed to echo testimony at an ongoing evidentiary hearing that continues to look into the disastrous and deadly “accidental” introduction of COVID-19 into San Quentin prison, which occurred when CDCR officials arranged for the transfer of more than 100 people from the California Institution for Men (CIM) located in Chino, California.

At the time, CIM was the facility with the state’s worst COVID outbreak, and SQ had yet to have a single case.  All that changed when it turned out that a large percentage of those men transferred were already infected — a fact that timely virus testing would have revealed, if anyone had bothered.

The Davis Vanguard has a story about Friday’s hearing, which included testimony by several incarcerated witnesses who described the conditions in San Quentin during the sudden and massive outbreak of the virus

One witness spoke about how he watched his friend die from COVID-19, while staff allegedly took their time responding to the friend’s obvious distress.

His words seem also to sum up the larger message of the new OIG’s report.