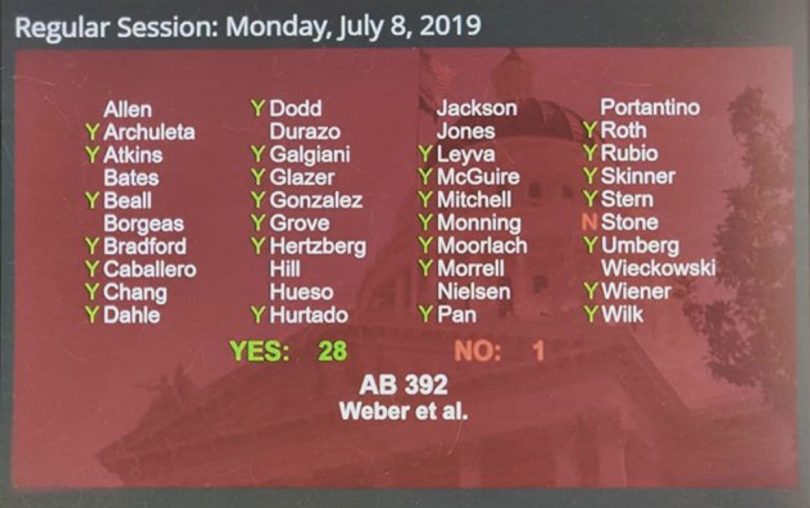 On Monday, AB 392, a bill that seeks to change the circumstances under which law enforcement officers can use deadly force, sailed out of the California Senate with a 34-3 vote.

In recent months, Gov. Newsom has expressed support for the “important” measure, which he says “will help restore community trust in our criminal justice system.”

Back in May, lawmakers agreed to significant changes to the bill that got law enforcement unions to drop their opposition, but resulted in a final product that some former bill-backers, including Black Lives Matter, say is far too watered down. Others say that in its current form, AB 392 will still make a crucial difference, and give California one of the strongest use-of-force laws in the nation. (Note: in this case, the term “deadly force” means any police use of force–firearm or otherwise–that carries a substantial risk of killing or seriously injuring a person.)

Currently, state law says that police officers can use deadly force when “objectively reasonable”—when another officer with similar training and experience would have behaved similarly under the same circumstances.

It’s a “squishy” standard that “doesn’t actually provide you with much guidance,” says Peter Bibring, the ACLU’s Director of Police Practices.

AB 392 would require law enforcement officers to use deadly force only when “necessary to defend against an imminent threat of death or serious bodily injury to the officer or to another person.”

Originally the bill defined “necessary” to mean “no reasonable alternative to the use of deadly force,” but the definition was lost in the wave of amendments.

The bill “specifies that a peace officer who makes or attempts to make an arrest need not retreat or desist from their efforts by reason of the resistance or threatened resistance of the person being arrested,” according to the bill’s Senate floor analysis. “A peace officer shall not be deemed an aggressor or lose the right to self-defense by the use of objectively reasonable force, otherwise in compliance with the provisions of this bill to effect the arrest or to prevent escape or to overcome resistance.”

At the same time, according to the legislators’ analysis, “the authority to use physical force, conferred on peace officers by this section, is a serious responsibility that shall be exercised judiciously and with respect for human rights and dignity and for the sanctity of every human life.”

Each person “has a right to be free from excessive use of force by officers acting under color of law,” the legislators wrote.

“With the legislative passage of AB 392 and the commitment from the Governor, California strengthens the relationships between our communities and law enforcement to make our communities safer,” Assm. McCarty said.

The bill is co-sponsored by a group of organizations that includes the ACLU, the Youth Justice Coalition, and the Alliance for Boys and Men of Color, and officially supported by dozens more.

Leave a Reply to Wyatt X