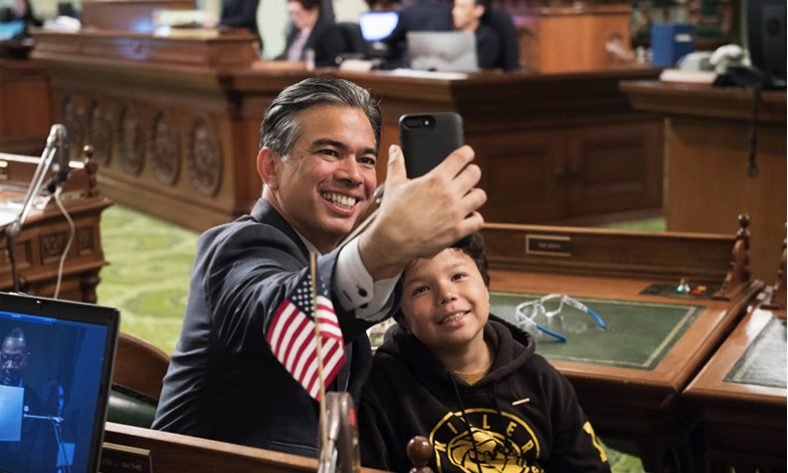 Becerra, as most know, was confirmed last Thursday as President Joe Biden’s Secretary of Health and Human Services.

As the outgoing AG’s confirmation began to move forward there was much speculation about who the governor might pick as his replacement, with even names like Congressman Adam Schiff rumored to be on the list. 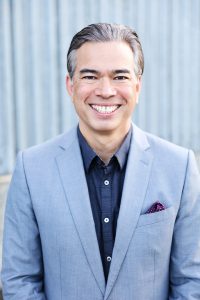 During the handicapping, Sacramento watchers such as the LA Times columnist George Skelton downplayed Bonta’s chances, labeling him as “little known outside his Assembly district.”  As it turned out, some of those capital watchers arguably need to get out more as, among justice advocates, Bonta is both known and highly regarded — a fact of which the governor was clearly aware.

“Rob represents what makes California great – our desire to take on righteous fights and reverse systematic injustices,” said Newsom in a statement after the announcement. “Growing up with parents steeped in social justice movements, Rob has become a national leader in the fight to repair our justice system and defend the rights of every Californian.”

And most importantly, said Newsom, “at this moment when so many communities are under attack for who they are and who they love, Rob has fought to…protect our communities from the forces of hate.”

The state’s justice advocates have been cheering the unexpected choice of Bonta who has been a prime mover on a list of critical justice reform issues.

He has, for example, led the first-in-the-nation efforts to end cash bail.  He also moved to ban for-profit prisons, protected renters from wrongful evictions, and has been a leading voice in strengthening hate crime protections.

Bonta was also a joint author of ACA 6, which led to the passage of Prop. 17, the ballot proposition that, in 2020, restored the right to vote to 50,000 Californians on parole.

Most recently, Bonta joined Assemblyman David Chiu in sponsoring Assembly Bill 767. This is the bill that, if passed and signed, would make families of those killed by police eligible for the same victims’ services as other survivors with family members who have died via violent crime (as WLA noted earlier this week). 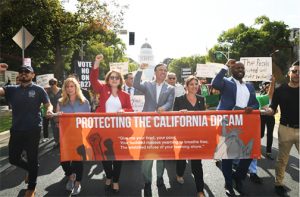 “By naming a champion of criminal justice reform who is invested in creating shared safety for all, the Governor has demonstrated his commitment to creating a safer and more just California,” wrote representatives from Californians for Safety and Justice in an emailed statement to WLA.

“Rob Bonta demonstrated critical leadership in updating our state’s criminal justice records system while he was in the state legislature, as well as leading on bail reform, protecting immigrants rights ,and advocating for incarcerated individuals’ rights during the covid pandemic.”

Born in the Philippines to a Philippina mother, and a dad who grew up in Ventura County, Bonta will be the first AAPI to hold the post of California’s top cop.

Bonta was already a long-overdue barrier breaker when he was elected to the state assembly in 2012,  representing a Bay Area district that includes the cities of Oakland, Alameda, and San Leandro, thus becoming the first Filipino American state legislator in California’s then 160-plus-year history. 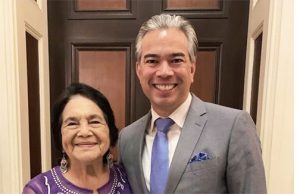 The new nominee for AG,  grew up in an activist household, with a father who marched for civil rights in Selma.  After leaving the Philippines via a three-week boat journey when Bonta was a few months old, his parents and their infant son settled in the Tehachapi Mountains outside Bakersfield.  There they joined Cesar Chavez and Dolores Huerta to organize exploited farmworkers in the Central Valley, and a few years later, advocated for democracy in the Philippines, where  Ferdinand Marcos had recently declared martial law.

Bonta was an undergraduate at Yale, where he also got his law degree.  Yet, he attended with the help of financial aid, and paid for books and the rest of tuition by cleaning laundry rooms.  After college, he worked for a while in public practice, then spent nine years as a Deputy City Attorney in the San Francisco City Attorney’s Office, before beginning to run for public office.

Yet, then and now, his inherited activism remained blood deep.

When Bonta announced the new legislation to strengthen hate laws, he told the COVID-masked group that come to hear the announcement, that in his office in the state capitol, he keeps a photograph of a sign that once hung in a hotel lobby in Stockton in the 1920s.

“The sign has four simple words on it,” Bonta said to those gathered. “‘Positively no Philippinos allowed.‘

He keeps the photo, he said, “as a constant reminder of the injustice and indignity and hate that too many communities in this state and this nation have faced for decades. It’s also my fuel and motivation to fight harder and do more to end that injustice.”

LA’s reformist district attorney, George Gascón, was among those who were quick to praise the governor’s choice of Bonta.

“As evidenced by his prolific authorship and support for reform-minded policies in the legislature,”Gascón wrote in an emailed statement, “Mr. Bonta shares a commitment to safety, equity, rehabilitation and redemption that will serve the interests and well-being of all Californians as we work to modernize a dated system of justice.”

LA DA Gascón also wrote about the importance of the selection of Bonta right now, given recent events.

“That California’s chief law enforcement official is a member of the AAPI community speaks volumes to the Golden State’s commitment to advance tolerance and inclusion and end the violence visited against vulnerable members of our community,” he said.

The newly formed Prosecutors’ Alliance, made up of the state’s progressive prosecutors including Gascón, San Francisco’s Chesa Boudin, Contra Costa’s Diana Becton, San Joaquin’s Tori Verber Salazar, and others, was quick to tweet their congratulations to Bonta, writing, “He has been, and will continue to be, a leader in the fight for criminal justice reform.”

On a national level, the members of the Democratic Attorneys General Association were also among those cheering California’s newly nominated AG.   “We are thrilled to welcome Rob Bonta into our room here at the Democratic Attorneys General Association,” wrote the associations executive director,  Bonta’s strong track record of fighting for justice and equity—whether it be criminal justice and immigration reforms, environmental justice, or consumer protection—sets him up for success as he takes charge at California DOJ.”

Among other duties, the attorney general’s office serves as a watchdog on police misconduct. Many who have been tracking Bonta’s career, are cautiously optimistic that he will be the right person for that part of his new job as well.

Bonta’s nomination must, of course, be approved by the state legislature.