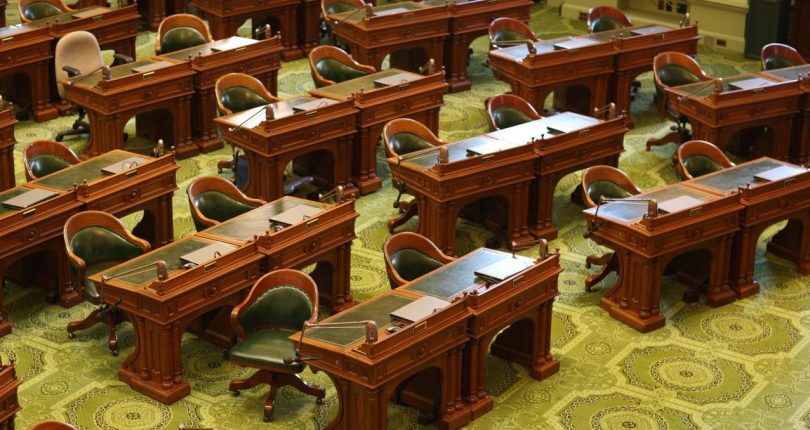 Editor’s Note: Last year, the California Assembly enacted a new rule that grants committee chairs the explicit power to decide not to hear a bill at all–essentially killing the bill without discussing the bill in committee and hearing testimony from members of the public.

A handful of bills have fallen victim to this new rule, including Assemblywoman Laura Friedman’s AB 276, which would have required all gun owners to lock up their firearms to prevent theft, accidental shootings, and “unauthorized access.” The law would have carried a penalty of $250 to $1000 for individuals found to have failed to secure their guns with a Department of Justice-approved firearm safety device.

Assemblyman Reggie Jones-Sawyer, who chairs the Assembly Public Safety Committee, says he’s killing SB 276 now in order to give bill supporters more time to improve the language so that it has a better chance of passing next year. But Assm. Friedman says she is “frustrated” by Jones-Sawyer’s move.

Gun control, school spending, curbs on greenhouse gases: With Democrats holding more power at the Capitol than they’ve had since the 19th century, California’s legislative pipeline is full this year with big, blue-state ideas.

In theory, no Democrat’s bill should be left behind. But that’s not what’s happening, and the reason is roiling both sides of the aisle in Sacramento.

The complaint? Democrats who lead legislative committees are using a powerful tool to kill bills before they even get a vote.

The tool? Simply doing nothing.

Under a rule the California Assembly put in place at the start of the current session, committee chairs can decide whether to bring a bill assigned to their committee up for consideration. As key deadlines came and went this month for bills to move out of committee, chairs used the new power to quash bills by just not scheduling them for a public hearing.

No hearing, no debate, no vote.

Democrats—who hold all the chairmanships because of their party’s mega-majority in the Legislature—flexed their muscle not only to bury GOP legislation, but also to silently sideline bills by fellow Democrats that might be embarrassing to publicly vote down.

Among the victims: Democratic legislation to alter the formula for funding public schools to devote more money to low-achieving students (a complex plan that stresses racial inequities); a bill to develop a strategy to phase out sales of gas-powered cars in favor of cleaner vehicles (guaranteed to create conflicts for Democrats whose constituents work in the oil industry); and a potentially divisive proposal requiring that gun owners lock up their weapons when they leave home.

“I was very frustrated,” said Assemblywoman Laura Friedman, a Democrat from Glendale whose bill on gun storage was shelved without a hearing.

“The committee is there to discuss areas of policy. If the chair has concerns about the policy, it’s my opinion that having it discussed in committee is the right approach.”

It’s the latest sign that Democrats’ growing majority in Sacramento doesn’t necessarily mean more unity. Democrats now hold about three-quarters of the Legislature’s seats—a margin that gives the party the potential for great power, but also makes it vulnerable to fracture under the weight of its ideological, geographic and socio-economic diversity.

Refusing to set a hearing for a bill isn’t the only way Dems are quietly killing Democratic legislation. Several progressive bills stalled this month because their authors knew they would fail in committee and so opted not to bring them up for a vote. They included measures to expand rent control, broaden data privacy protections and ban super-sized servings of soda.

But lawmakers have long had the face-saving authority to pull their own bill if they could tell it wasn’t going to pass. The change this year is in the Assembly, where members are grappling with the committee chairs’ new authority to not hear a bill. (The state Senate did not enact a similar rule change this year. Its custom has been to let chairs decide whether to set hearings.)

The lower house adopted new rules when the legislative session began, explicitly giving committee chairs the power to choose whether to hear legislation. Previously, committees generally heard all bills if the author wanted them heard, and it was unusual for a chair not to extend that courtesy.

The Assembly’s move to clarify that chairs can decide whether to set a hearing is in keeping with Speaker Anthony Rendon’s long-stated philosophy that committee chairs should have more power.

Assembly Republicans quickly jumped on the change as something that could doom their bills, and voted against the rule.

“Chairmen under these new rules would have the power to essentially kill a bill by denying it a hearing,” GOP Assemblyman Jay Obernolte said in December as the Assembly voted on the new rules. “And they would be able to do this… without a vote of the members of that committee and without any testimony from the public. That is a violation not only of the longstanding practice of this chamber, but also of the principles of democracy itself.”

Democratic Assemblyman Reggie Jones-Sawyer, who chairs the public safety committee that held Friedman’s gun storage bill, said that by not hearing it he’s giving supporters more time to resolve problems and bring it back next year. He wouldn’t say why he objected to the gun storage policy, though his committee’s analysis says it could conflict with local ordinances.

“I want to see if we can come together and make the bill much better so it’s not a contentious bill and we can get it through,” Jones-Sawyer said. “I’m trying to make sure the committee as a whole doesn’t kill the bill.”

Democratic Assemblywoman Shirley Weber said that in her more than six years in the Legislature—during which she’s carried plenty of controversial legislation—this month was the first time a committee chair has refused to hear one of her bills. Her legislation to change the formula for funding public schools so that more money would be devoted to student groups that post the lowest test scores was one of several measures related to the funding formula that were not heard in the education committee.

“Generally even if the chair opposes a bill they will set the bill for a hearing, and then people can vote it up or down,” Weber said.

The new way, she said, amounts to “a one-person decision.”

It’s striking a nerve across the political spectrum, from a Sierra Club lobbyist who’s angry that a clean-cars bill wasn’t heard, to a conservative Republican who’s fuming because her campus free-speech bill—making it harder for colleges to restrict who can speak at campus events—wasn’t brought up for a vote.

“When you don’t allow that bill to be heard then you don’t even have the discussion,” said GOP Assemblywoman Melissa Melendez. “The opportunity for a healthy debate is taken away.”