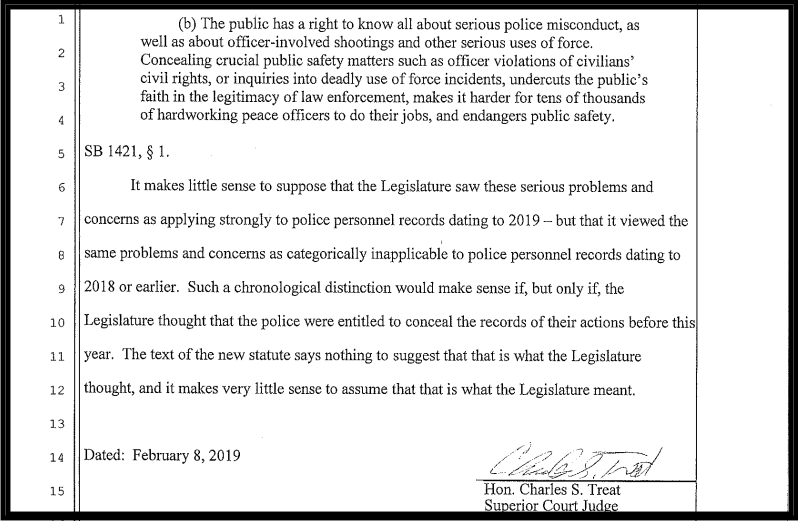 On Friday, a Contra Costa County Superior Court judge became the first jurist to rule on the retroactivity of a newly enacted police transparency law, SB 1421.

The judge’s ruling requires police departments to release police disciplinary records created prior to 2019, and deals a major blow to law enforcement unions fighting to drastically narrow the scope of the new law.

On January 1, SB 1421 rolled back a 1978 law that, for four decades, made California the most secretive state in the country regarding law enforcement records.

The new law makes records related to police misconduct and serious and fatal uses of force available to the media and the public via California Public Records Act requests.

SB 1421 requires law enforcement agencies to release records of incidents in which officers use force–specifically, when cops discharge their firearms or Tasers, use a weapon to strike a person’s head or neck, or use force that results in serious bodily harm or death.

Records of on-duty sexual assault, including when cops exchange sex for leniency, are available to the public, under the new police transparency law.

SB 1421 also grants the public access to personnel records of officers who are found to have been dishonest in the “reporting, investigation, or prosecution of a crime.” Until this year, even prosecutors have been barred from accessing personnel records that may impact their cases, even for officers with a history of lying in police reports or planting evidence.

Over the last two months, law enforcement unions across the state have fought to keep police personnel data out of the hands of the media and the public, arguing in court that the new law should not be applied to records made before 2019, because the bill did not expressly declare the changes to be retroactive. However, the bill’s author, Senator Nancy Skinner (D-Berkeley), has said that she intended the law to apply to all eligible records in law enforcement agencies’ possession.

State legislators drafted and passed SB 1421 in response to concerns that “concealing crucial public safety matters such as officer violations of civilians’ civil rights, or inquiries into deadly use of force incidents, undercuts the public’s faith in the legitimacy of law enforcement,” and “makes it harder for tens of thousands of hardworking peace officers to do their jobs, and endangers public safety.”

Leave a Reply to Fed Up X