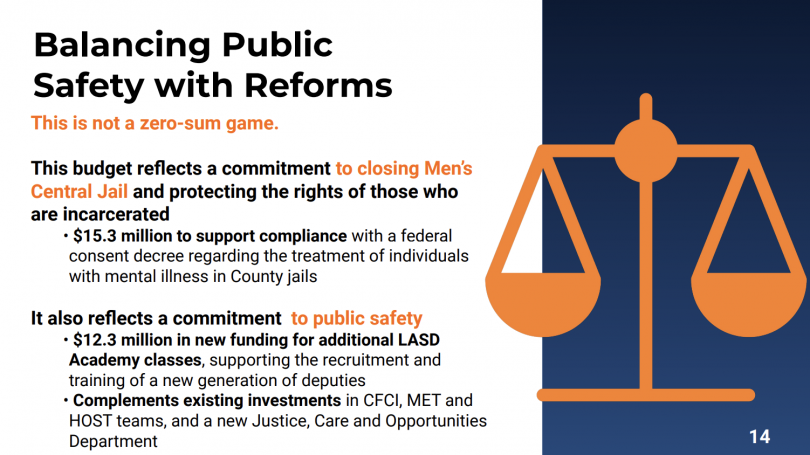 In the coming months, Los Angeles County’s CEO and Board of Supervisors will be working to balance a massive $38.5 billion budget for the 2022-2023 fiscal year.

While official public hearings will begin May 11, CEO Fesia Davenport launched the first step of the public budget process on April 19, with a presentation before the county supervisors, the highlights of which included boosted funding for alternatives to incarceration, youth development, and reducing homelessness.

A shift in justice spending

This first iteration of the budget includes $200 million in Measure J funding to bring the county’s “care-first, jails-last” vision — in accordance with the planned closure of the county’s crumbling Men’s Central Jail — to fruition.

In November 2020, LA’s voters approved Measure J, a ballot initiative to amend the county’s charter to permanently set aside at least 10% of existing locally-controlled revenues to be directed to community investment and alternatives to incarceration starting in fiscal year 2021-22. At the time, then-CEO Sachi Hamai estimated that a 10 percent allocation would amount to between $360 and $490 million per year. During that first year, the county planned to set aside $100 million, saying that the county would take three years to build up to a full 10 percent.

Throughout last year’s budget process, residents spoke out, urging the county to invest 10 percent in the first year for what the county is calling “Care First and Community Investment (CFCI)” for initiatives focused on reducing racial disparities in the justice system and reliance on incarceration. (The number was ultimately bumped to $187.7 million with a supplement of one-time funding from the American Rescue Plan.)

Tuesday’s proposed budget would bring the Measure J investment to $200 million for year two. The county plans to allocate the full 10% of locally-controlled revenue Measure J calls for, by June 2024.

And, while we await the closure of Men’s Central Jail, the budget also sets aside $15.3 million for keeping in compliance with a federal consent decree over conditions and mental health services in the jail.

LA County’s Office of Diversion and Reentry, which operates critical diversion programs that bring vulnerable people out of LA’s jails and into permanent housing where they receive robust services, would also get a small boost in funding via the proposed budget.

In June 2021, the LA County Supervisors called on the CEO to look into alternative ways to sustain and expand ODR which was run primarily on a one-time pot of money, including dipping into state health funding. By the end of the budget process in October of last year, the county had found some extra funding, which reduced the office’s structural deficit from nearly $100 million to $42 million.

This year’s proposed $30 million in ongoing funding would further reduce the deficit to $29 million, according to Davenport. With this proposed ongoing funding, ODR would be able to sustain its current level of operation through 2025-26. “The CEO will continue to work with ODR to identify and implement ongoing funding solutions and will provide updates during future budget phases,” a letter introducing the budget proposal stated.

Sustaining ODR through at least 2025-26 does not, however, allow room for expansion of its permanent supportive housing programs. Yet, community advocates and local leaders agree expansion will be critically important to the effort to close the jail.

One of the obstacles to growth, is the fact that ODR’s housing-focused programs have been all but closed off to new clients since the office reached an LA County CEO-imposed 2,200-bed population cap, which the bulk of ODR’s programs hit in April 2021.

On Tuesday, Supervisor Holly Mitchell addressed the cap as a “particularly urgent” issue if the county is to close Men’s Central Jail within the planned time frame. “It is essential that we invest in community-based systems of care, and create 3,600 new ODR mental health beds, so that those who are suffering from mental illness do not continue to deteriorate in jail,” Mitchell said. “I will reiterate: we must expand funding for the Office of Diversion and Reentry. That’s critical.”

Public speakers also urged the board to boost ODR’s capacity.

“The board has heard this call to fund new treatment beds repeatedly,” a caller who identified himself as Charlie said. “County workgroup after workgroup has made this need clear and plain. Yet, the board has refused to allocate the money. While the board drags its feet, vulnerable people are deteriorating in jail and coming home in worse condition.”

While LASD’s total funding amount remains relatively unchanged between the 2021-22 budget and this new recommended budget, $12.3 million is set aside to increase academy classes for the LASD.

Several public speakers urged the board to put that and other sheriff’s department pots of money to different use, citing the county’s commitment to “care-first, jail-last.”

The supervisors, said Ivette Ale from Dignity and Power Now, “have committed to a care-first approach, but we’re seeing both the sheriff and the probation departments’ budgets maintained year after year, while proven agencies within the county, like the Office of Diversion and Reentry … continue to be underfunded comparatively.” ​​

Correction: This story previously indicated that the Office of Diversion and Reentry does not operate programs that remove people from LA’s jail system pretrial. In fact, approximately one-third of people in ODR housing are pretrial, and three out of five ODR programs operate pre-plea and pre-trial.